How to brand great Russian literature 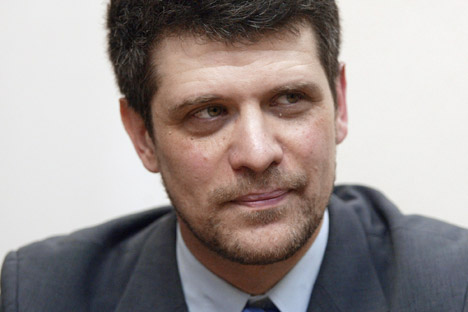 Dmitry Bak was named as the new director of the Literature Museum in late January. Source: Kommersant

Dmitry Bak, the new director of the Literature Museum, talked to a number of journalists about how the museum is developing and emphasized how classic Russian literature needs to be understood through the contemporary. To this end, the director suggests branding Russian literature — starting with unknown contemporary authors with bright futures ahead of them.

The newly appointed director of the Literature Museum, Dmitry Bak,recently put forward his vision of future plans for the museum. He noted that it was crucial for the museum to “revert toward normal people,” stressing that interaction between museum specialists and the general public was not a simple objective.

Bak’s outlined objectives for the museum included developing links with literature museums abroad, exchanging ideas, establishing grants, and setting up projects with both international and domestic aspects. Bak also called on his staff to give due attention to contemporary literature.

“In their own time, Tolstoy, Dostoyevsky and Pushkin were not ‘classics,’ but just normal men. No one who picked up a copy of Dostoyevsky’s ‘Poor Folk’ would ever have guessed that he bore in hand a work by the future author of ‘The Brothers Karamazov.’ We can only grasp this classic literature through its contemporaneity,”Bak told Izvestia.

The State Museum of Literature was founded in 1934. Today it remains the sole large-scale museum in Russia that is dedicated to literature. Its collections include many documents, manuscripts, graphic materials, photographs, memoir items, applied-art objects, books, and sound recordings.

The catalog totals more than 700,000 items related to the output and lives of Russian authors over the years — from the Middle Ages to the present day.

Dmitry Bak was named as the new director of the Literature Museum in late January, although his predecessor, Marina Gomozkova, claims she only learned of plans to appoint a new director through the mass media. Bak is a professor of philology and the rector of the Russian University of the Humanities (RGGU).

The new director plans to transform the image of the museum into a space for literary discussions, involvement in book fairs and festivals, and literature awards.

“When it comes to the Literature Museum, we are dealing with a kind of pyramid whose broad base is the richest imaginable corpus of national heritage — a treasure-house of incalculable extent,” says Bak. “A top that same pyramid is a kind of cliché we call ‘Great Russian Literature.’

However, between the learned work in the archives (which is understood by only a small handful of specialists) and the displays that bring these treasures to the general public’s view, there exists a vast gulf.

There’s a saying — you may know it — that many women get married, have children, yet die virgins... in other words, having missed out on a great deal in their lives. It’s just the same with Russian literature.

It’s either discussed between professionals, who get the whole idea in just half a word (although no one else has a clue about the discussion), or in a giddy fit, such as when quotes from Pushkin were hung from every lamppost during his 200th Anniversary Year.

“Reclaiming literature, and making it the property of us all — it’s a tricky job. No one has the slightest doubt how to exhibit ‘The Coronation of The Blessed Virgin’ by Paolo Veronese. No matter how it’s displayed, it’ll still remain a masterpiece, and people will flock to see it. But try doing the same with books? Few people have much of an idea,” Bak said in an interview with Bolshoi Gorod magazine.

“What’s so bad about making a brand out of great Russian literature?” says Bak. “People today like to moan: ‘Where are the Tolstoys and Dostoyevskys nowadays, eh?’ Or: ‘Your poets, sitting about in literary cafes — are they Gumilev or Blok, are they?’ But I reply: ‘Well, actually, they might really turn out to be them.’

“Literary rebranding, overall, consists of taking ordinary authors whom nobody has heard of — like Yevgenia Vodolazkina [a finalist in the 2010 Big Book Awards] — and suggesting that they might be a big literary name in the future," says Bak.

"You actually have to tell people this stuff. It’s not about book presentations, but a systematic process of osmosis into people’s consciousness about what really great literature can be and continues to be — so they can feel how great it is really, watch how it’s crafted," he says.

"I don’t mean with Pushkin’s work: I mean starting with modern writing. If you get a feel of what’s happening in today’s writing, you get a fresh viewpoint for looking at Pushkin or Turgenev,” Bak added.

Based on materials from Izvestia and Bolshoi Gorod.