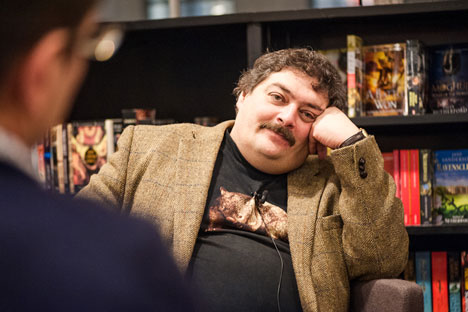 An Evening with Russian famous writer Dmitry Bykov in London is a rollercoaster of politics and poetry from one of Russia’s great satirical writers.

Dmitry Bykov is a larger-than-life figure in so many ways. He is a big man and his personality is immense; his unruly hair and casual T-shirts contrast delightfully with his analytical mind and phenomenal memory. As part of the Slovo Festival of Russian Literature, he captivated a crowded, London audience this week with a bravura performance, reciting poetry, cracking jokes and engaging in a relaxed, but impassioned interview.

Russians around the world take dictation

Bykov has won numerous prizes for his novels and biographies, including the National Bestseller and Big Book awards for “Boris Pasternak” (2005). He is also a teacher, journalist, TV and radio presenter, but he is currently best known for his Citizen Poet project, involving satirical poetry on contemporary themes in the styles of different Russian writers. Most people have come to the sold-out “Evening with Dmitry Bykov” to see the co-creator of Citizen Poet and its new successor, Gospodin Khoroshi (Mr. Good).

“I’m not sure if I’m a big fan of his prose-writing,” said Yelena Durden-Smith, who was in the audience, “but he is a very skilled versifier. I think this is his prime area.” She enthusiastically recounted the satirical targets of the latest show, which included the Pope, Hugo Chavez and – at one point – a letter from Silvio Berlusconi to Vladimir Putin’s dog, Koni, written in the style of the lyrical poet, Sergei Yesenin.

After a series of virtuoso recitations of his own pastiche-poetry whose literary inspirations include Lermontov, Pasternak, Pushkin and Blok, Bykov talked about his extensive travels across Russia. “The provinces are more radicalized than Moscow,” he said. “They are hungrier, angrier and less subject to TV propaganda.”

“Some people hate me”

Most people have come to the sold-out “Evening with Dmitry Bykov” to see the co-creator of Citizen Poet and its new successor, Gospodin Khoroshi (Mr. Good). Source: Courtesy of Academia Rossica

As a writer with a reputation for being outspoken, Bykov accepts his controversial status with equanimity: “Some people love me; some people hate me,” he said. “When I die, they will hang me from my tongue … No one in Russia can be loved universally.”

One of the recurring themes in his work is the cyclical nature of Russian history. He sees parallels between figures in different eras, enabling him to create acute, epoch-spanning satire: “Psychologically all these characters are the same,” he added. “People play the same role and history repeats itself. We have the same play being staged over and over with different set designs.”

The image of dark forces also recurs in his novels. “Do you see these in contemporary Russia?” asked one member of the audience. “Of course I do,” Bykov replied, “and I’m sure you do too … we know that in the universe dark matter prevails,” he concluded, “but a reverse process is starting. For many people, self-respect is more important than bread and butter.”

Moving from seriousness to humor again, he jokingly promised the audience mysterious wealth if they bought his new novel “Iks”: “I don’t know how, but money will come to you if you read it … this book will provoke crazy flash mobs.” But he was somber in response to a question about the future. “I don’t see the future of Russia; it’s closed to me,” he said, but he talked about the way forward for literature: “I am interested in books that are written in a non-linear way.” He offered examples of fragmented or fluid narratives, from authors as diverse as Leo Tolstoy and James Joyce.

“I am also interested in this cult of humanity,” Bykov continued. “Where will it lead? We all have these gadgets; one day they’ll be implanted in our brains or we’ll have telepathy…” The prophecies spiraled wildly through Waterstones’ fiction department, where the large audience was rapt.

“Why do you write?” an audience member asked. Immediately Bykov responded: “The fear of death. The fear that I will die and nothing will be left. Writing is therapy. I don’t drink; I hate drugs; sex is a very brief satisfaction. Writing is the thing that keeps me going.”