A novelist who works miracles with the mundane 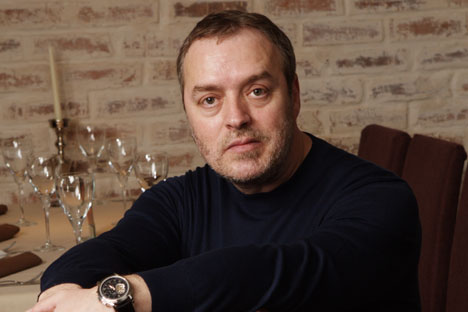 A young man hears the voice of his long-dead grandmother ordering him to go to a nearby town. At the train station, he inadvertently saves the life of a homeless man. This man turns out to be his grandfather, who was thought to have perished in the camps many years ago. These serendipitous events – which the author asserts are true – prompted the then 30-year-old poet and magazine editor to pen his first novel, "The Vital Needs of the Dead."

Sakhnovsky, now 54, writes prose that has the potential to become classic literature: the stylistic originality and opulent language combine with unconventional and entertaining plots where the mundane and the miraculous merge organically into one, becoming seamless and inseparable.

Many of the characters are based on real people but are joined by archetypes including a ghost, a wandering Jew, or omniscient sage. The author does not restrict himself to any particular time frame: a single novel can weave together stories of, say, the Middle Ages and the present day.

Despite such statements, the world of science fiction sometimes claims him for itself: for example, in 2008, Sakhnovsky's novel "The Man Who Knew Everything" won the Bronze Snail prize, awarded to the finest works of fiction selected by Boris Strugatsky (other winners of this award include Viktor Pelevin, Dmitry Bykov and Sergei Lukyanenko).

Sakhnovsky has also been in the running for other emblematic Russian awards. Despite not getting the final nod, he has been shortlisted for the "Big Book," "National Best Seller," and "Russian Booker" prizes.

Sakhnovsky said he believes that his books contain neither mystery nor fantasy, just a keen interest in what is usually described as miraculous: "Scientists consider that only about 6 percent of what surrounds us can be perceived. The remaining 94 percent cannot be recognized by the ordinary physical senses."

It is this 94 percent that is the subject of his research. Fellow writer Lyudmila Ulitskaya said about the author: "Sakhnovsky is in possession of a rare gift, which he uses to describe not only the visible exterior, but the volatile essence of what is taking place. It is not a method, not a literary device, not a cerebral design, but the writer's all-seeing eye.”

The background of this mysterious prosaist is both simple and extraordinary by the standards of Russian literary circles, where almost all the key players huddle down in Moscow or St. Petersburg, or ply their trade abroad. Sakhnovsky lives in the Ural city of Yekaterinburg, and continues to work modestly as the literary editor of a magazine.

For him, location is not of cardinal importance: "It basically struck me that I could live anywhere," he reflected. "Be it New York or Yekaterinburg, I'd still be sitting in a corner in front of my computer.”

His first novel, "The Vital Needs of the Dead" (published in English by Glagoslav in 2012), earned Sakhnovsky recognition and sack loads of letters from readers who saw themselves in his characters. It is a rite-of-passage story about a boy growing up in a small Ural town, and his relationship with his grandmother, who for much of the novel is dead, but continues to influence the life of her grandson.

Sakhnovsky himself grew up in the small Ural town of Orsk, and certain peripeteia are indeed based on real events, including the story of his grandmother, who was forced to flee with her small son from Moscow to the Urals to escape the Stalinist purges.

Sakhnovsky wrote "The Vital Needs of the Dead" with pen on paper. In terms of number of corrections per square inch, the manuscript is reminiscent of the workbooks of Marcel Proust, one of Sakhnovsky's favorite writers, with whom he is often compared. "I do not let a phrase go until it fits perfectly," he explained.

Sakhnovsky's rich, singular and idiosyncratic language is borne of his long ("until a very grown-up age") fascination with poetry, which resulted in the publication of two collections of verse in the 1980s.

"However, fine [word craft] should not drown out the overall appeal," said the writer. "I greatly appreciate captivating prose.”

In his second novel, "The Man Who Knew Everything", Sakhnovsky experiments with the genre, twisting the storyline to the limit. All of a sudden, the protagonist is endowed with superpowers and hunted by several global intelligence agencies simultaneously. In Russia, the novel was adapted for the screen by director Vladimir Mirzoyev, who was the first to see the cinematic quality of Sakhnovsky's prose.

Revealing the secrets of his inspiration, Sakhnovsky acknowledges that "there are situations, people, and moments in life that cause wild infatuation, and the only option is to master it artistically."