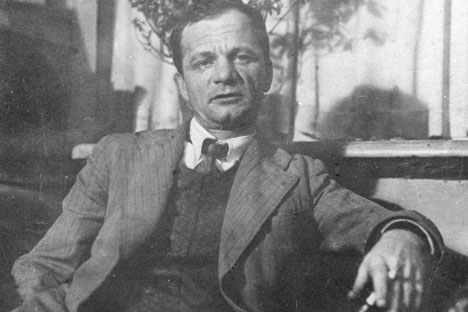 According to the translator of Russian literature Robert Chandler, Much of Platonov’s work can be seen as an attempt to give words back to those who have been forced into inarticulacy. Source: RIA Novosti

Story-teller, socialist, soldier, scum: RBTH describes the extraordinary life and work of Andrey Platonov which was censored during his life.

Stalin wrote “scum” in the margin of one of Andrey Platonov’s surreal stories and told the editor to “give him a good belting.” Censored and supressed during his lifetime, Platonov, who was born in 1899, is now seen as a creative beacon of Soviet literature.

Some fans would make even greater claims. In his introduction to a collection of Platonov’s stories called “Soul” (NYRB 2007), the translator Robert Chandler said: “All Russians consider Pushkin their greatest poet; in time, I believe, it will become equally clear that Platonov is their greatest prose writer.”

“Soul” includes the translator’s personal favorite, “The Return,” which also appeared in the anthology “Russian Short Stories from Pushkin to Buida” (Penguin, 2005).

“This story about an army captain's fraught return to his family at the end of the Second World War is witty, tender and wise," Chandler said in a recent interview with RBTH. "It is full of vivid detail, but it is of universal relevance."

"Anyone who has ever, in moments of impatience, felt the desire to smash up his existing, imperfect life and run off in pursuit of some illusion of a perfect life elsewhere … can learn something from this story,” Chandler added.

Platonov has always been widely admired by fellow writers, including Pasternak and Bulgakov; the poet, Joseph Brodsky, saw him as the equal of Joyce and Kafka; the historian, Orlando Figes, considers the discovery of Platonov’s previously unpublished manuscripts as “the most precious [literary] dividend from the collapse of the Soviet system.”

A working class boy from Voronezh, Platonov worked on the railroad as a teenager, fought with the Red Army before he was twenty, and died in obscure poverty at the age of 52.

Many of his texts were published only posthumously, like the unfinished “Happy Moscow,” written during the 1930s; this bizarre, hypnotic tale finally appeared in 1991 and NYRB Classics have just issued a revised translation.

In his first works in the early 1920s, Platonov dreamed of a utopian future in which electricity transformed human nature. He worked enthusiastically on land reclamation projects, wrote baffling, ambiguous novels and stories, became a war reporter and a publisher of children’s literature. He caught tuberculosis from his son, who had returned from a prison camp.

Introducing three chapters from “Chevengeur,” Platonov’s 1928 novel about an imaginary town, Chandler wrote in “The Portable Platonov” (Glas, 1999): “Much of Platonov’s work can be seen as an attempt to give words back to those who have been forced into inarticulacy.”

His surrealism, Chandler explained, reflects the chaos of the times. The - sometimes darkly comic - attempts of Chevengeur’s confused inhabitants to establish communism include a messianic belief that political change will cause the sky to “become bluer and more transparent” or that “Rosa Luxemburg will once again come to life as a living citizen.”

The Foundation Pit is Platonov’s best-known novel, written in 1929, but unpublished in Russia until 1988. The bleakly satirical story describes a group of early Soviet workers trying to dig the foundations for a grand building which will never be built.

Geoffrey Hosking, reviewing the book in the Times Literary Supplement, pinpointed its power in revealing “the strange and tormented mixture of hope and despair by which many ordinary people must have lived during Stalin’s revolution from above.”

“There is certainly no other writer who was able to convey, simultaneously, the beauty and hope of the Soviet dream and its terrible reality,” Chandler said in an interview with the New Yorker.

What is it about Platonov's prose style that makes some people rate his work so highly?

“On the surface, Platonov is the least ‘literary’ of writers," Chandler said "His language can seem crude, elemental; it has been described as ‘the language that might be spoken by the roots of trees.’  At the same time, however, this language is extraordinarily subtle, packed with the most delicate of puns and allusions.”

Daniel Kalder, in the Guardian, described Platonov as a committed communist who became appalled by the excesses of Stalinism and – unusually - “tried to negotiate a space within Soviet culture in which he could write honestly about what was going on.”

Chandler points out that he did manage to publish great stories in his lifetime, although they were viciously criticized, and he directly influenced younger writers, like Vasily Grossman.

A recent anthology of “Russian Magic Tales” included late stories by Platonov, written while he was dying.

“His courage and tenacity were remarkable,” said Chandler, quoting a passage that describes a plane tree whose trunk has incorporated huge stones and “encircled them with patient bark, made them something it could live with … meekly lifting up as it grew taller what should have destroyed it.”

Written in 1934, this “now seems to be a description of Platonov himself.”

Writers from the generation who “shared the hopes of the revolution,” who wrote complicated, challenging works “from inside the Soviet experience” are gaining worldwide fame.