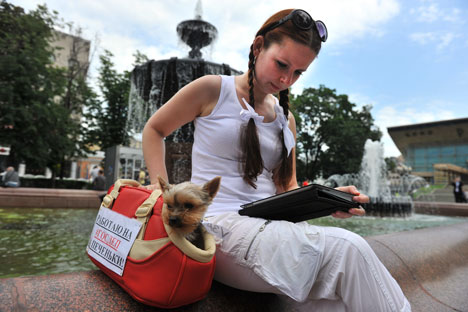 As the tablet segment continues its expansion in Russia, RBTH explores the journey from the printed story to the electronic word.

Internet writer and media artist Aleksroma once created a piece of literary art based on Dostoyevsky’s “The Idiot.” Alexander Romadanov, Aleksroma’s real name, presented the entire novel in the form of a ticker, single lines of electronic text streaming across a board much in the same way that breaking news is announced on Times Square.

It takes roughly 24 hours for the ticker to run through the entire text. The “ticking Idiot” is just the beginning of a much larger project, according to Aleksroma.

A recent study showed that participants had a higher degree of enjoyment when reading a printed book over an electronic one. At the same time, specialized reading devices, tablets and smartphones were well regarded in terms of accuracy and ease. Are e-books merely a new medium of transferring literary content? Or are there other forms that do not simply simulate the traditional appearance of printed books, but rather generate specific technologies to reproduce content in new forms?

For example HokusPokus, the Russian publisher with the magical name, offers literary works exclusively for iPads and iPhones in elaborate layouts. The texts are richly illustrated and the typography cleverly arranged. HokusPokus focuses on short prose especially, which, according to the thesis, faces an uphill battle against novels and text messages in the current genre nomenclature. One of the first iPad books to hit the market was a narrative entitled “Love” by author Zakhar Prilepin. The text is augmented by illustrations provided by artist Varvara Polyakova.

HokusPokus gave well-known Russian web designer Artemiy Lebedev a comic made by Oleg Tischenkov exclusively for Apple devices aptly named “iCat.” However, hypertext prophets were sorely disappointed by the interactivity promised in the wonderfully illustrated and animated iPad comic; it was apparently a mere marketing device.

The market in Russia for tablets is growing. According to the daily Vedomosti, approximately 800,000 devices were purchased in the first half of 2012, a 300 percent increase since they were launched. The Apple iPad continues to be the most popular device, but both Russian Asian competitors are gaining in popularity due in large part to the lower prices.

As the segment is still in its infancy, inexpensive, yet creative solutions are needed for the new book formats to gain traction among readers. The business model for illustrated iPad prose has proven to be too costly. Innovator Maxim Kotin recently teamed up with Internet portal Slon.ru to promote and market his own digital book production.

The project is called “Fastbook,” and includes more than just fiction by presenting essays and political reports on hot topics. The fastbooks intentionally aim for mediocrity, not qualitatively, but rather quantitatively speaking. “Fastbook titles resemble narratives and novellas, but the heroes are live and the stories are real,” according to a genre description on the project’s website. One of the first fast books is the life story of famous Russian TV personality Olga Romanova, written by journalist Svetlana Reiter. The book, entitled “How the beloved TV host became treasure of the opposition,” describes the protagonist’s journey from a life of glamour to a life of protest.

“Fastbook” is the Russian version of Amazon’s genre Kindle Singles, which was introduced a couple of years ago. Its format includes self-published novella-length literature. But Kotin intends to significantly improve the Russian version, he said, especially where aesthetics is concerned.

Henrike Schmidt works at the Peter Szondi Institute in Berlin. Her emphasis is on Russian and Bulgarian literature, avant-garde poetry and digital culture.