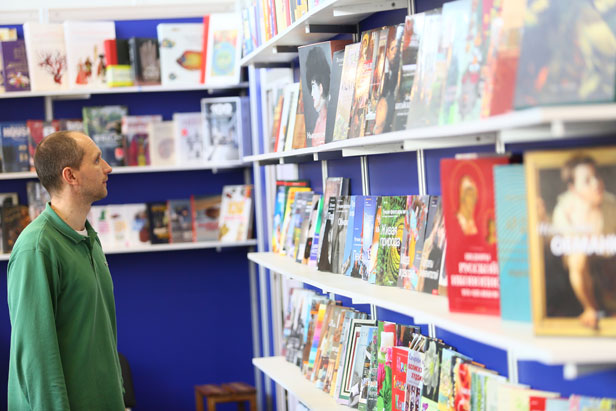 Russians are ready to read books on plenty of different topics. Source: PhotoXpress

Russian literature is at a crossroads: Writers are seeking new genres, a new mode of expression, and new heroes. Russian critics and book editors tell RBTH what their market needs and what contemporary readers want.

While print runs of books decrease every year and new platforms for reading are constantly introduced, the question for publishers remains the same: What do their readers want this time?

Print ratings compiled by the Russian Book Chamber – the organization responsible for registering every book released in the country – offer a clear snapshot of the Russian book market: out of the top ten bestselling authors in 2012, eight wrote detective novels, one wrote chick-lit and the other wrote thrillers.

The top places on the bestseller list were the most intriguing; here the sinful and the virtuous engaged in eternal battle, this time for readers’ affections. A collection of true stories from the lives of contemporary Russian priesthood, written by Archimandrite Tikhon (Shevkunov), competed with Erica James’s Fifty “Shades of Grey,” which has topped charts all over the world.

The phenomenal success last year of Father Tikhon’s “Everyday Saints” exceeded all expectations. The book sold more than a million copies in Russia, and garnered a respectable number of literary prizes – including the Readers’ Choice category of the Russian Big Book prize, the Prose of the Year category in the Book of the Year prize, and two categories of the Runet Book Prize. Critics immediately coined the phrase “Orthodox Bestseller” and on its success the Olma Media publishing house launched a prose series based on Orthodox Christianity.

One of the most noticeable trends in modern Russian literature is a pronounced interest in non-fiction. This is confirmed by publishers and critics alike – to quote Konstantin Milchin; “Russian non-fiction is catching on, and this is very encouraging indeed.”

Renowned book editor Elena Shubina of AST publishing mentors a string of prize-winning authors. She notes a “surge in popularity of the classic family genre, where a family’s history is examined from great-grandparents through to the present day (‘Medea and her Children’ and ‘The Kukotsky Case’ by Lyudmila Ulitskaya, and “Lazarus’s Women” by Marina Stepnova). The same applies to non-fiction – memoirs, biographies, diaries. There is a sense of real-life, a story ‘about people’ – and this is what stimulates people’s interest.”

“If you want to find out about the basics of contemporary Russian prose you need to read Vladimir Makanin and Mikhail Shishkin: both of these writers have at least one great novel to their name – “Asan” and “Maidenhair.” The writers represent two poles of Russian literature – in the first case [Makanin] we have tough realism, a deep, almost merciless penetration into a person’s psychology, an understanding of the power structures, politics and history. And in the second example [Shishkin] we see intertwined elements of language, a constant dialogue with the Russian classics, and an amazing ability to listen to someone else’s voice, words, quality, the free music of language.”

Another prominent face of Russian publishing is editor Yulia Kachalkina of Eksmo publishing house. Kachalkina works with the biggest names of Russian literature – the likes of Viktor Pelevin and Dmitry Bykov – and is also known for launching new Russian literary talent. She believes that today “people want to read stories – conceptualism is becoming less and less interesting, there is a demand for quality, reader-friendly prose, without unnecessary twists and turns. People are tired of mind games. Life itself is too complicated for them to seek complexity in what they read as well,” she said.

Kachalkina also notes that trends in contemporary Russian prose are particular; “books in the memoir format, love stories, and stories about unusual people, people who stand out from the crowd (either historical novels, or fiction) – these are the books that tend to enjoy the greatest popularity.

In both literature and pulp fiction, writers are currently searching for fresh themes and new modes of expression. Kachalkina said they are also searching for true heroes: “Russian writers are moving towards heroic prose, sensing the demands of our age.

“This year’s trend in mass literature is the medical novel,” notes Milchin, who headed the jury for the Novaya Slovesnost prize, where the winner of the 2012 public choice award was a book of satirical stories from the life a male nurse.

Fantasy writers are also pushing the boundaries of the genre. According to Shubina, “Russian fantasy is becoming more and more diluted, and has partly turned into “realist prose with elements of fantasy”; in other words “the Strugatsky school seems to have finally overcome Igor Efremov, and writers no longer feel the need to imitate the American fantasy genre.

New movements in literature are closely intertwined with online developments: so, in the last few years popular writers have been joined by a large number of bloggers, as well as authors, who suffered rejections from publishers before causing a sensation online (the most successful work of this kind is Dmitry Glukhovsky’s post-apocalyptic saga “Metro 2033”). Elena Shubina predicts that the Internet’s influence will not end here: “it seems likely that the short novella – a genre many publishers prefer to eschew – will soon become a key trend, in part because the short-form genre is very much alive on the blogosphere.