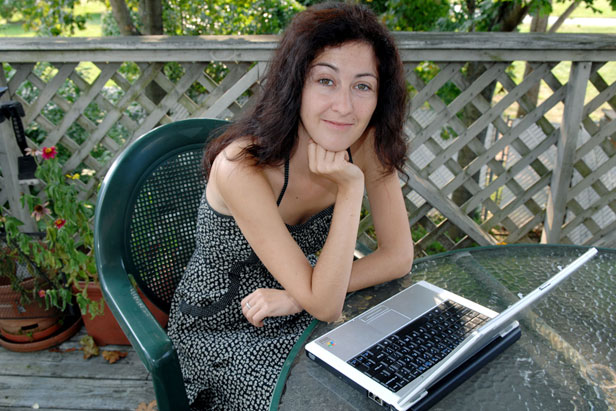 Struggling writers find it difficult to imagine how the author’s fiction was published in The New Yorker shortly after she learned English.

Lara Vapnyar could hardly speak English when she immigrated to the United States at the age of twenty-three, in 1994, three months’ pregnant. The experience was marred by morning sickness and the difficulties of immigrant life: “I hated everything,” she recalled in a video interview.

She had the idea when she came to America she would get a “wonderful, exciting, amazing job,” she said, adding, that she “couldn’t find any job… I started writing by accident.”

Right away, Vapnyar began to write in English – a language she was still learning. Her English quickly became lyrical, and she realized she was a natural storyteller. She began writing about the Russian Jewish émigrés she knew.

As a young girl, Vapnyar dreamed of becoming either an actress or an adventurer. Life as a young émigré and new mother was hard work, but writing as “therapy” turned out to be much more promising than she had imagined.

She studied international literature at the City University of New York (CUNY). Her professor, Louis Menand, a staff writer for The New Yorker, noticed her literary talent and asked if he could show one of her stories to the magazine’s editors. That first story was never published, but the top editors at the illustrious magazine were intrigued.

Gary Shteyngart: From dystopia with love

The New Yorker published her next short story, about a young teacher in charge of a sex education class in Moscow, on June 13, 2003. “Love Lessons Mondays, 9 A.M.” was a magnificent literary debut.

“I had no clue what The New Yorker was,” Vapnyar laughed in an interview with RBTH. “Usually young writers work a lot to achieve it, they go through ups and downs, at some point they inevitably lose their hope and such,” said the pretty brunette with deep dark eyes and a bit of a shy smile. “I only realized retrospectively how important this was for me. Since I didn’t know what it was [The New Yorker], I wasn’t even worried – okay, someone’s going to read my story, big deal.”

Vapnyar said the best way to learn to write in English is to read a lot and watch as many movies as possible. Even very simple books such as romance novels can be very helpful. “The kind you can buy at a pharmacy. They are very simple, even silly. Their language is very understandable, it’s easy to read and at times you even feel more educated than the author. So it makes you very self-confident, and then you can move on to more complicated writers.”

“I don’t know why this film, but I learned English watching “Pretty Woman.” I saw it so many times, until I understood every bit of conversation. It was 17 years ago, so I owe Garry Marshall big for my English,” she said.

Her collection of stories, “There are Jews in My House,” was published (Pantheon Books) in 2003. “Memoirs of a Muse,” her first novel, was published in 2006, and a 2008 collection is called “Broccoli and Other Tales of Food and Love.”

While she appreciates all readers, Vapnyar said she has a soft spot for Russian readers. When she first found out that she was published in Russian, she “was happy, but in a very different way. It was not the same feeling I had when I was told that my books are being translated into any other languages – German, Spanish, and Italian … It was like coming back to my childhood, a very warm and touching feeling.”

Also, criticism from Russians stings more, she said, “because I’m still Russian, so Russians’ opinion is that of someone close, and particularly significant,” she explained.

Yet the author doesn’t visit Russia very often. Over the last two decades she’s visited only twice, both times for work. “Last time was interesting, because I went there as an American writer, representing the U.S. Department of State,” Lara recalled.

Russian school. “It was their first time in Russia, it was very exciting. They liked it a lot. I’d say teenagers are the same everywhere.” Both of her children speak Russian well, with a slight American accent, noticeable, as it turned out, only in Russia.

Even though she has made it as a writer, the author is concerned that fewer and fewer people still read books. So she especially values those who do, no matter where they come from. “I hope the readers read my stories not because they are wondering whether we are eating Russian salad for New Year’s Eve, but because of some deeper things. Such as, what people feel, how they fall in love, how they fall out of love.”