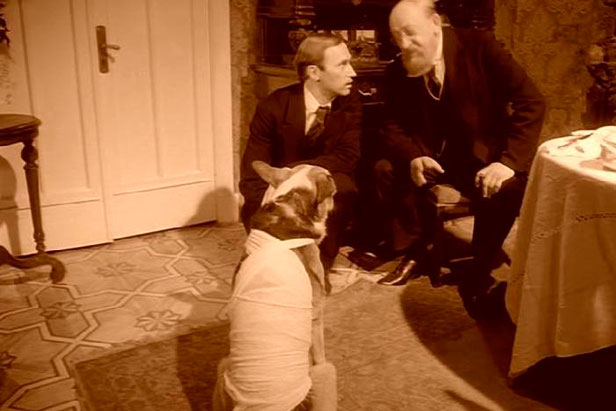 A screenshot from Soviet famous movie 'The Heart of a Dog' that can be considered even more popular than a book. Source: Liveinternet.ru

“The Heart of a Dog” cost Mikhail Bulgakov dearly, yet today it still seduces readers. In times of crisis, the literature of this great Russian writer is good therapy to combat pessimism.

Mikhail Bulgakov wrote his tight, absurdist masterpiece, “The Heart of a Dog” in 1925, but it would not see the light of day in the Soviet Union until 1987. Thus was the beginning of Bulgakov’s long and tortuous relationship with political power.

The U.S.S.R. was not a good place, nor was it a good time, to write with a biting sense of humor.

When he settled in Moscow in 1921 and quit medicine to pursue journalism and literature, Bulgakov began to explore the contradictions of socialism, the problem of housing, and the absurdities of bureaucracy.  In short, Bulgakov reflected upon the preoccupations of Muscovites and the rules that governed life in the city.

The year after he arrived in Moscow, the OGPU (the secret police of the Soviet Union from 1922 to 1934) started keeping a secret file on the writer.

The apparent motive is trivial: Bulgakov published an article in a Berlin magazine announcing his intention to create a bibliographic dictionary of contemporary Russian authors without distinguishing between those who lived in the Soviet Union and those living in exile.

This news was received with suspicion by the government: Writers who lived abroad were considered enemies of the people.

In secret report number II0, an informer explained that Mikhail Bulgakov gave a reading of his new novel to the literary circle he moved in. The novel was titled “The Heart of a Dog.”

“The entire work is written in hostile tones and breathes an infinite contempt upon the Soviet order…,” the writer of the report concluded.

Suspicions about the writer began to grow and the OGPU tracked his movements. It was right at that time when Bulgakov began to enjoy some success thanks to the publication of his first novel, “The White Guard,” and also “Diavoliada,” his collection of satirical stories about Soviet life.

Mikhail Bulgakov and the heart of a man: can evil support good?

A master writer at his peak

On May 7, 1926, the police searched his house and confiscated “The Heart of a Dog” and three diary notebooks.

On September 22, they summoned him to an interrogation, where he explained: “I can’t write about peasant themes because I don’t like the country. … More than anything else I am attracted by Russian intellectual life.  I love it and consider it, despite its weakness, the best sector of the country.  Its destiny affects me and its sufferings touch my heart.”

Bulgakov is direct and transparent, and so he defended his style of writing: “… But my mood is satirical.  And my quill produces things that apparently are not well received in Communist circles. I always write with a clean conscience and just the way I see things.  The negative aspects of Soviet life catch my attention more because I instinctively observe in them good fodder for my works (I am a satirist).”

In “The Heart of a Dog,” Bulgakov depicts a present-day doctor who, seduced by the scientific spirit of the time, performs a transplant of certain organs from a criminal’s cadaver to the body of Sharik, a street dog in Moscow.

Doctor Philip Philipovich intends to study the influence of the pituitary gland and the testicles on the rejuvenation of the human body, a plot which at that time must not have been considered as crazy as it would be now, for after the October Revolution there was an eruption of feverish activity in all areas of knowledge, including medicine.

Bulgakov, as a doctor, would surely have been aware of his colleagues’ research.

In the novel, the experiment triggers an unexpected result.  The mongrel adopts the features and characteristics of the man, including his intelligence. When Sharik becomes aware of his new identity, he rebels against his creator, criticizing his counter-revolutionary spirit and his bourgeois existence.

When Sharikov (his new name) becomes a man, he becomes a repulsive, rude and aggressive “comrade” for everyone, especially for Philipovich.

Bulgakov’s preoccupation with the freedom and essence of man, his conception of the world and of Good and Evil, would be displayed in his masterpiece “The Master and Margarita.”

By that time, this master of Russian literature had endured a career laden with troubles.  His novels ceased to be published; his plays were continually censored; his determination to emigrate was never seriously considered by Stalin.

Bulgakov died a neglected figure, a stateless person in his own country.

However, time has done him justice. Mikhail Bulgakov is considered one of the bastions of universal literature.  Readers the world over, have surrendered to his power of seduction.  Now, as then, Bulgakov’s irony can save us from pessimism—and perhaps even from despair.