For the literary crowd, perestroika is now 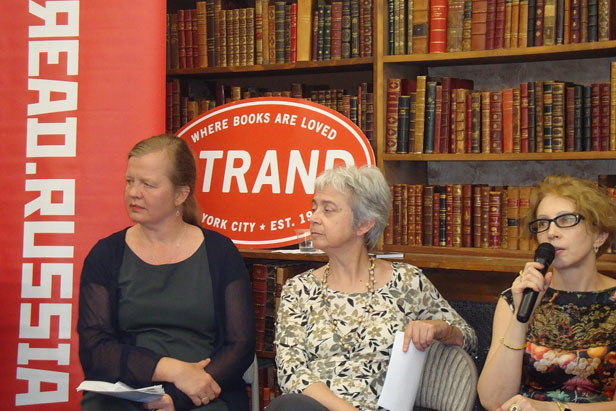 Speaking to RBTH at the second annual “Read Russia” during Book Expo America (BEA) May 29-June 1, top translator Marian Schwartz said that the world of Russian literature has vastly opened up in the past decade.

Marian Schwartz is known as a deeply intuitive translator who is not afraid to take risks. When she fell in love with Andrei Gelasimov’s “Thirst,” she decided to translate the entire book “on spec,” for free, and take it to American publishers. She was finding the novel length, engaging work unexpectedly difficult to sell when AmazonCrossing picked the book up.

The publisher has since released “The Lying Year” and will release "Gods of the Steppe" in September. Said Schwartz: “I'm working on the fourth and last, "Rachel," right now, for release probably in early 2014.

“My personal mission has always been to bring Russian culture to an English-language audience,” Schwartz said.

Russia Beyond the Headlines: What was the atmosphere for English translations of Russian literature during perestroika?

Marian Schwartz: Twenty-five years ago, I was younger and I thought oh well now we’ll get to see the full range and rich diversity of Russian literature. But that didn’t happen.

M.S.: Well my view is there was a tremendous backlog. First, what had to come out was émigré literature and silenced writers. Then, in the 1990s, Russian writers wrote more for themselves than for the outside world. They got carried away by the fact that they could get books with frank sex and violence published - and that those books would sell.

This kind of transgressive material no longer pushes any Western buttons, though. Vladimir Sorokin is transgressive to a Russian but not to an American.

Other writers’ attention turned inward and became linguistically complex, so there was a lot of writing whose brilliance was based on how Russian works, and that kind of brilliance is very hard to convey in translation. So, in some ways, the first post-perestroika decade was a lost decade for the Western reader.

RBTH: What about today?

M.S.: The world of Russian literature really started opening up in the last ten years—partly because there now seem to be more and more different kinds of books that might work in the West. And the recent funding initiatives have already brought many more Russian writers to the Western reader’s attention. As more books get published, we’ve started to see growing name recognition and an increasing number of authors as well. This is how a readership is built.

RBTH: Do we have enough quality translators to keep up with the momentum?

M.S.: I think we do have the translators to keep up with the quality. I'm seeing impressive work from a number of younger translators as well, some of them identified through the Academia Rossica Young Translators Award.

There is more of a translator culture in the U.S. now. We’re better connected, and we know and support one another. The old situation, when professors translated the books they happened to care about, whether or not they had any ability as translators, and whether or not there was a Western reader for them, is being overtaken by a more publishing-savvy generation of translators, in both the U.S. and the U.K.