Era of printed books coming to a close in Russia 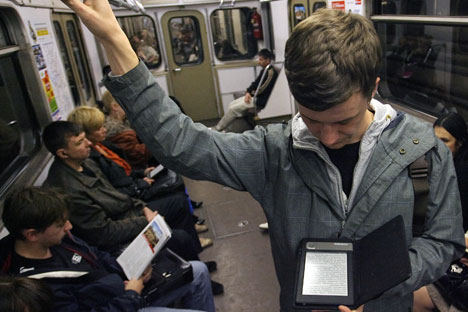 More and more people prefer to read from the screens of computers, smartphones, tablets, and e-readers, or even listen to audio books in their cars. Source: ITAR-TASS

In one troubling study, the Public Opinion Foundation reports that 44 percent of those Russians polled admitted to not having read a single book in the past year; 32 percent of respondents said they had no interest in reading. RBTH investigates this phenomenon.

The Public Opinion Foundation is not alone in its recent findings on reading habits in Russia. “According to a report from the research company TNS Russia cited in an industry study by the Press Agency, Russian citizens over the age of 16 spend around eight hours a day consuming various media. Reading accounts for just 1.8 percent of that time (around nine minutes daily)," says Yuri Pulya, head of the Periodicals, Book Publishing, and Printing Division of the Federal Agency for Press and Mass Communications.

It is hard to establish whether Russians are losing interest in reading, or whether other factors are at play. For instance, according to a March poll by the All-Russian Public Opinion Research Center, Russians have, in fact, been reading more – on average, 4.2 books in a term in 2013, compared to 3.9 books in 2011.

Click here to enlarge the infographics: E-reading in Russia

Even so, it is possible to assess the popularity of print books by analyzing publishing volumes. In Russia, as in the rest of the world, they have been steadily – though not yet catastrophically – shrinking. According to statistics supplied by the Book Chamber, the total number of copies printed in the country in 2012 fell by 12 percent, as compared to 2011.

Russian bookstores – in particular, Moscow bookstores – have been generally flexible in their responses to this new situation. Places that only sell books are dwindling in major metropolitan areas, with each bookstore or chain developing a proprietary concept and cultivating a loyal customer base. Bookstores have turned into clubs, cafés or lecture halls; 24/7 stores have opened, as well as different specialized or even mobile projects.

One such project is the children’s bus known as “Bumper,” which is not only a bookstore but also a club with a fairly substantial educational program and an active position. “We don’t wait for people to come and buy books: We choose the best and most interesting books and bring them to the readers,” according to the motto of Bumper. The bus roams Russian provinces all summer, acquainting children with the best of the latest titles. BookCrossing is gaining popularity as well, with book-swap shelves now able to be found in many bookstores, clubs and cafés.

Online sales of print books are on the rise. Alexei Kuzmenko, manager of the book division of OZON.ru (Russia’s biggest online retailer) told RBTH: “Web sales of paper books continue to grow. For example, we recorded a 30 percent increase in dollar terms and a 27 percent increase in the number of copies in 2012.” He added, however, that the growth is concentrated in the regions, rather than in Moscow or St. Petersburg – and it is in the regions that the fight for customers’ wallets will unfold.

Claims that Russians today lack interest in reading are especially controversial in the context of the popular opinion that people in the Soviet Union were the most read citizens in the world. It is common knowledge that books were prized back in the Soviet era: They were in short supply and had to be “procured,” like fashionable clothes or food delicacies.

There were waiting lists of Soviet readers for subscriptions. It was also possible to obtain a coupon for a book by Alexander Dumas, for example, by collecting 44 pounds of recycled paper. In the late Soviet era, secondhand bookstores appeared, but their selections were limited and prices were high. It was only in the 1990s that the situation started to change.

Looking at book circulation through the eyes of a contemporary reader, two trends stand out. First of all, print books have ceased to be the main text medium: Many people prefer to read from the screens of computers, smartphones, tablets, and e-readers, or even listen to audio books in their cars. Second, books have lost their prestige in Russia: Owning a rare edition is no longer a status symbol as it used to be in Soviet times.

According to a VTsIOM poll, 83 percent of Russians own personal libraries, but 46 percent of them have 100 books at most. Interestingly, even school questionnaires asking parents to list children’s books available at home only reserve three lines for the response.

Click here to enlarge the infographics: What do people read?