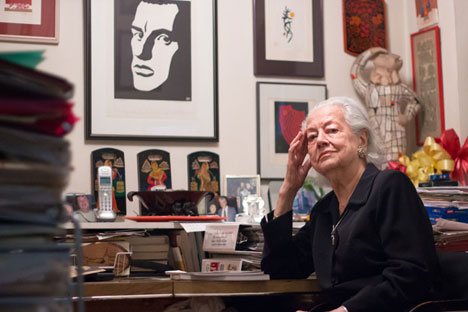 Patricia Thompson: 'I am not just saying that I am Mayakovsky's daughter, I am proving it, with all the documents.' Source: Tinker Coalescing

Known to Americans as Patricia Thompson, in Russia she is recognized as Yelena Vladimirovna Mayakovskaya, the daughter of Vladimir Mayakovsky.

Professor, academic, writer and editor Patricia Thompson is known to Russians and poetry lovers as Yelena Vladimirovna. In an intimate interview, she tells RBTH a dramatic story of growing up in the United States with the secret that she was the great poet’s daughter.

Russia Beyond the Headlines (RBTH): I know you are collecting an archive related to Mayakovsky. Can you tell us a little bit more about it?

Patricia Thompson (P.T.): You have to understand that I have had a career of my own. I published twenty-two books without any reference to my father. I've never capitalized on his name. I am eighty-seven years old and I am now a Professor Emerita…

So I don't collect Mayakovsky's archive. I am collecting documents about the life of my mother, me, and my son. I am going to give it to Mayakovsky's State Museum in Moscow.

These are the articles he wrote for The New York Times, while in the U.S., and this is the letter he wrote to my mother and me on October 26, 1928, [shows the document]. This is the most important document. It ends with “I”m kissing all your eight paws. Yours, Vol”. That was his signature, “Vol” - short from “Volodya.”

A letter of Vladimir Maykovsky to Patricia's mother ends with “I”m kissing all your eight paws. Yours, Vol”. That was his signature, “Vol” - short from “Volodya.” Source: Tinker Coalescing

RBTH: How did your mother and Mayakovsky meet in the first place?

P.T.: Mayakovsky came to America in 1925 and only for three months. My mother [Elly Jones] was very beautiful woman, she was a model. Mayakovsky and my mother had a very passionate, close relationship, and it was not just physical, it was intellectual, too. She translated German poetry for him, they had so much in common, but he was supporter of the revolution and my mother was a capitalist's daughter.

I was born in 1926. Still back in Russia, my mother married a man called George Jones, who helped her to get out of the country. The rest of her family had to stay in Russia under very difficult circumstances.

Jones knew that I was not his daughter but he was kind enough to give me his name as well. We couldn't go public about who we are because that would put us in danger, so we just kept silent.

And now, you see, I am not just saying that I am Mayakovsky's daughter, I am proving it, with all the documents. In his letter he is saying: “To my two Ellies, I want to come and see you...” It's his handwriting and this has been published in many magazines.

RBTH: How and when did you decide to go public about your relation to Mayakovsky?

P.T.: I was sixty-five years old. At my college we had something called Mayakovsky's centennial, celebrating 100 years since his birth. The story came out in an educational journal.

RBTH: What kind of person was your mother?

P.T.: She spoke four languages, she had learned English in Russia and my grandfather was wealthy enough to take his entire family for one year to live in California where all my uncles and aunts and my mother polished their English...

Barely an accent. It was before the revolution. My mother was Russian until she died. She raised me to love Russia, not the politics, but the culture. To be proud that I am Russian and that I am his daughter.

RBTH: Have you traveled to Russia often?

P.T.: I've visited Russia about 10 times. I've scattered my mother's ashes on Mayakovsky's grave. A few years ago I was invited to Russia by the Ministry of Foreign Affairs, by Mr. Lavrov, along with other descendants of famous Russians to be awarded the Lomonosov order in the name Yelena Vladimirovna Mayakovskaya. I hope to be buried in Russia.

RBTH: When and how did your mother tell you who your father was?

RBTH: What are some highlights of your career?

P.T.: I was a successful writer and editor before I became an academic. I wrote for multiple magazines and I was an editor at publishing houses such as Macmillan and McGraw.

RBTH: What have you been working on lately?

P.T.: These are my last books in which I explain my philosophy of life, it's called “The Hestia trilogy” after the Greek Goddess of the household. Out of over 20 books I've written I'm most proud of these.

My theoretical work separates home place from the market place. What is masculine in one culture may be feminine in another.

And we are all in a very fluent gender continuum and sometimes in our life, when a woman is six feet tall, there are a lot of things people assume: I am not passive, I am a defender of what I think he would have defended. And I think he [Mayakovsky] would have been very much thrilled by gender equality.

Of course, a woman can be a, say, Google CEO – but how many women can afford two-three helpers at home so they can succeed in their career?

RBTH: What does your son do?

P.T.: My son, Roger is an intellectual property lawyer. When he first went to Russia, he wanted to explain to Russians that their greatest resource was intellectual, not oil and gas.

He is also a descendant of the founder of the American constitution, the signer from Connecticut Roger Sherman Thomson. So he is a revolutionary on both sides. I have a grandson, too – he is originally from Colombia, Roger adopted him. He is my heart, he is 21 now.

RBTH: What is your favorite Mayakovsky poem?

P.T.: If you like
I'll be furious flesh elemental,
or - changing to tones that the sunset arouses - if you like -
I'll be extraordinary gentle,
not a man but - a cloud in trousers.”

I am mourning the fact that America is not a poetry country... What do we watch? “America’s Got Talent”...