In Sci-Fi literature, it’s back to the future 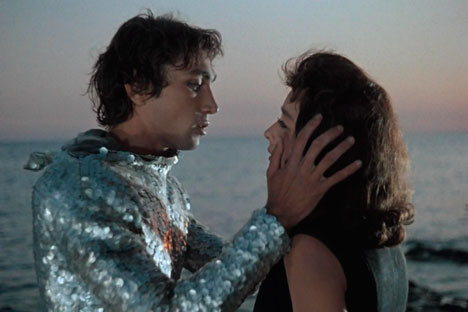 The screening of Belyaev 'Amphibian Man' is a masterpiece of Soviet kino industry. On the screenshot is Ampibian man in his 'diving suit.' Source: kinopoisk.ru

In Russia, especially, writers are often seen as visionaries and seers who can predict or influence the future. Twentieth-century writers certainly seemed eerily prescient in many respects. Some writers have also shown their ability to invent the technology of the future within the pages of their books, much the same way Leonardo da Vinci created spectacular flying machines in his sketchbooks.

Many of these machines in literature have become reality. What was fiction then is reality now.

In 1928, Alexander Belyaev published a novel entitled “Amphibian Man” – about a young man called Ichthyandr, who, as a child, had shark's gills transplanted onto his body. In the story, Ichthyandr used to spend a lot of time in the sea, using a thin form-fitting suit, fins, gloves and glasses with thick lenses.

Today, this equipment is familiar to anyone who goes diving, surfing or underwater hunting. Modern wetsuits, made of neoprene, looking like a second skin, began to emerge in the 1950s in the United States.

The gadget for reading electronic newspapers was described by the Soviet science fiction writer Kir Bulychev in 1978. In his novel entitled “One Hundred Years from Now,” he mentioned a device similar to a smart phone or a tablet.

The book’s main protagonist had to press a black box on the side, similar to a cigar case, and there appeared a colorful screen with news about a festival on the moon, and a debate in the United Nations. Although the idea of e-books was not new, the first electronic reader appeared only in 1992.

Videos and audio books became an amazing discovery for characters in the novel “Aelita” written by Alexey Tolstoy in 1923.

In the story, two astronauts on Mars find a ruined city, and in it, a library building. There they found not only traditional paper volumes, but also a kind of television screen on which visitors could watch short videos. Los, one of the main characters, found objects that resembled today’s memory cards, as well as a book from which one could hear beautiful music.

In the story “Shadow of the Past,” published in 1945, Ivan Yefremov described the phenomenon that was to be discovered two years later by the Hungarian physicist Denes Gabor, which he called a hologram.

The heroes of the book were paleontologists who saw a Tyrannosaurus Rex in the formation of petrified resin. Gabor invented a holographic method, and in 1971 received a Nobel Prize for this discovery. The question of how to get a picture with depth with the help of light rays interested Gabor when he was involved in trying to make improvements to the electronic microscope.

Alexander Bogdanov described atomic interplanetary spacecraft in his novel “Red Star” in 1908. The Martian etheroneph – “a ship that traveled through the ether” – resembled an egg made of aluminum and glass, and could reach speeds of up to 50 kilometers per second. Elements of radioactive substances were split in its engines, and the released energy moved the ship.

In 1932, James Chadwick discovered the neutron and with it – new horizons for nuclear physics. In 1935, he received a Nobel Prize for this discovery.

Food made from oil

In the novel by Yevgeny Zamyatin entitled “We,” published in 1920, mankind had invented food made from oil, once and for all solving the problem of hunger. In a world where there were no more races, names, fashion or private life, food cubes obtained from the distillation of crude oil were handed out to everyone.

Since the 1950s, synthesized hydrocarbon oil has been used for the production of proteins as well as vitamins and antibiotics.