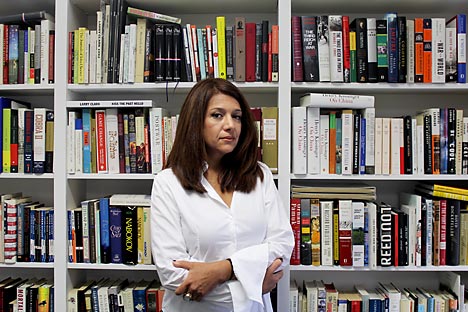 Of course, my father missed Leningrad, the city where he knew every street and every corner. And he missed his friends, but I can say with certainty that he loved America. Source: Elena Bobrova

On Dovlatov's birthday, RBTH celebrates the writer's rich legacy by speaking to his daughter Katherine Dovlatov, who has translated "Pushkin Hills," one of the author's signature works. The book is now out in the UK and it will be published in the US in March 2014.

Russia Beyond the Headlines: Your father, Sergei Dovlatov, wrote so many powerful stories set in Russia. Did he write about New York and the U.S.?

But mostly he wrote about his experiences in Russia. His stories are about people, about the human condition. They are driven by language, if you will. His characters, the crazy, eccentric, unforgettable characters, reveal themselves through dialogue.

That was, in fact, one of the difficulties in translating “Pushkin Hills” – how to distinguish each characters’ uniqueness through speech. The Russian distinguishes between so many dialects, inflections, social classes, educational levels, and backgrounds.

And my father had a perfect pitch when it came to language.

RBTH: I've found about a dozen stories that your father wrote for The New Yorker in the 1980s. Did he write these stories in English or were they translated from Russian?

K.D.: Father wrote in Russian. The first story selected by The New Yorker was published only six months after his arrival in New York.  Also, writing in English was never dad’s goal, he preferred to work with a good translator.

RBTH: “Pushkin Hills” is translated into English for the first time and it’s the first "new" Dovlatov in 23 years. Why did you choose this novel?

K.D.: Actually, I did not choose this novel, nor did I choose to be its translator. We signed a contract with the publishers, Alma in the U.K. and Counterpoint in the U.S., for three titles. Two were re-releases, works that were translated and published in America during my father’s life. The third was “Pushkin Hills.”

There was a never-before-published translation, which enabled the publishers to understand what they were getting, but they wanted it redone. We looked for a new translator for nearly two years. Various people submitted samples, but we couldn’t agree on one. I too decided to give it a shot. And submitted my sample anonymously, through our agent. My sample was rejected by the publisher.  We continued looking for a translator. The ones I wanted either didn’t have time or simply couldn’t afford to do it. Another six or so months later I submitted another sample, paying attention to earlier criticism. And this time the publisher liked it.

So you see, my translating “Pushkin Hills” was born of necessity, not a particular ambition on my part.

RBTH: Dovlatov moved to the U.S. in 1979 [he left Russia in 78 but arrived in NY in 79], when you were only a child. Did you speak with him later about his first impressions of New York?

K.D.: I can’t recall having had a specific conversation, just my observations at the time and what I’ve read in his correspondence after his death. I think father was overwhelmed by America, like any other immigrant. Imagine living in a black-and-white world, then suddenly finding yourself in a vibrant world of Technicolor. Although he was probably better prepared than many other émigrés: He knew and loved American literature and jazz, and contrary to what many have said, he spoke English. Not very well and not at the level where he felt comfortable, but his vocabulary was enviable.

I remember him sitting with a tape recorder, memorizing words diligently. Also, when he came to America, he had his family waiting for him – he had a place to live and contemplate what to do next. He had the luxury of time.

RBTH: Did his feelings change over time? Was there much homesickness or melancholy in the family? Was it easy for him to adapt to a new reality or it was total cultural shock? Why did he choose the U.S.?

K.D.: There has been much supposition and speculation as to the “tragedy” of my father’s life, being away from his homeland, the nostalgia… Nostalgia is a feeling common to most people. And it’s not about longing for a place as much as it is about longing for a time. The older we get, the more we turn to our memories and mourn lost time. But let’s not attach to this feeling of nostalgia the banal longing for birch trees…

The Dovlatov Story: Devotees hope to revive interest in the dissident’s life and work

Of course my father missed Leningrad, the city where he knew every street and every corner. And he missed his friends, but I can say with certainty that he loved America. And he realized his dreams in America, both personal and professional. Sergei Dovlatov became a writer in America, a writer who made a living from his writing. It’s true that his audience was mostly Russian-speaking and it was limited, and of course he wanted to be published in Russia where his audience counted in millions, but he enjoyed successes in America and was very proud of his accomplishments. He only achieved “critical acclaim” in the West, but he valued the recognition of his peers.

He was published regularly in The New Yorker magazine, his translated works (five books in total), received glowing reviews, he was a recipient of the Pen Club prize (although he had to turn it down, something to do with copyright commitment and timing). But most importantly – what he wanted most in life was to be a writer. And he became that. In America.

The U.S. wasn’t really a choice. It was the only place ever considered. By the time father was forced to leave, my mother and I were settled in New York. There were also other former Leningrad colleagues and friends who were already in the U.S. Carl Proffer and his publishing house, Ardis Press, first to publish a book by Sergei Dovlatov in America, were also here. And as I said before, father knew and loved American literature. He wanted to experience for himself what he had read in Faulkner, Cheever, Updike…

K.D.: It’s difficult to choose one work that is best. But I would have to say that “Pushkin Hills” is one of his finest efforts. My father didn’t believe that this particular work was translatable. Until I tackled it, I couldn’t fully understand why. Pushkin Hills is possibly the most Russian of his works. And while the language difficulties are surmountable, the cultural references present more difficulty. To me, this is the most personal of all my father’s works. It is about writing, family, love and country. It is about exile. It is about the situation in which a man who doesn’t fit in finds himself, equally hopeless in both 19th century and 20th century Russia. All this is packed into a slim 100 pages or so, filled with unforgettable characters and typical Dovlatov humor.

RBTH: Did American writers influence Dovlatov once he moved to the U.S.? If so, can you share with us the writers and works had an impact on him?

K.D.: When he was younger, he liked Hemingway. However some of the writers he admired throughout his life were Faulkner, Updike, Cheever, Anderson, Vonnegut, Dos Passos... These are some of the writers he wanted me to read. Unfortunately I was too busy trying to assimilate and have my own life in America, and at the time wasn’t interested in literature. We didn’t have discussions about literature, or any “adult” conversations, by which I mean where we spoke as equals. It was more of dad trying to teach me about life. Impart his wisdom. The two things of most value were having a vocation, career, a passion in life. The other was discipline.

According to mother, one of the last books he delighted in shortly before his death was a collection of essays by G.K. Chesterton.

RBTH: Where did you study? Have you done much translating before this book? What are you working on now?

K.D.: Once, a long time ago, I studied advertising and communication in New York. That was a time when I was still figuring things out and that field quickly lost its appeal. After my father died, I moved to Russia to learn about where I came from, and to try and understand my father better. In pursuit of that, after the ’98 economic crisis in Russia, I decided to move to London and study at the School of Slavonic and East European Studies. I did a degree in Russian Literature and it was probably the best thing I’ve ever done for myself. It helped me establish a dialogue with my father.

If people like my translation and publishers want more Dovlatov, then I’d like to translate more of my father. In my real life, I work with a property developer where I stage homes for sale.

RBTH: Is it difficult or fulfilling (or both) for you to translate the work of your own father and be part of the protection of his legacy?

Translating “Pushkin Hills” was a revelation. I had never before translated a work of literature and had no idea how humbling this experience is and how intimate. Humbling because you have to completely remove yourself from the equation. You function only as a mouthpiece for the author. Intimate, because you have to understand every nuance of every word before you can put it into another language. And in order to do that, you have to try and get inside the author’s head, who happens to be your father.

It was difficult, of course, because as Nabokov said, a translator must “have as much talent, or at least the same kind of talent, as the author he chooses.” My command of English certainly doesn’t come close to my father’s virtuosity with the Russian. That said, I feel that I did my best. And I feel that my dialogue with my father continues.