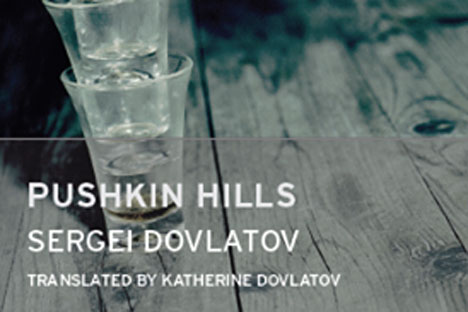 2013 marks the 30th anniversary of the novel’s original publication in Russian.

From the opening page of “Pushkin Hills,” Sergei Dovlatov’s witty observations and descriptive brilliance are a delight. Readers first meet Boris, an alcoholic, unpublished author, on his way to work as a tour guide in the old family estates of the poet Alexander Pushkin.

The setting is autobiographical. The writer Dovlatov worked summers as a guide in and around Mikhailovskoe, south of Pskov. The area is one of Russia’s many, charming Zapovedniki (museum reserves) and the novel’s Russian title “Zapovednik” has been made more specific as “Pushkin Hills.”

Dovlatov’s writing deserves to be better known among foreigners. His daughter, Katherine, has helped that process by creating a wonderful translation of “Zapovednik,” the first ever in English. In the acknowledgements, she thanks her father “for leaving behind an amazing gift that allows us to continue a dialogue.”

2013 is the 30th anniversary of the novel’s original publication in New York.

“Pushkin Hills” is rich in bittersweet comedy, including rural encounters (“From Leningrad.” “Ah, yeah, I heard of it...”) and questions from tourists: “What was the duel between Pushkin and Lermontov about?” He observes that pictures of famous people like to emphasize one large feature: Marx’s beard, Lenin’s forehead or Pushkin’s sideburns.

In some ways, Boris is a classic example of the Russian “superfluous man,” a very un-Soviet figure. Dovlatov’s tour-guide-hero has a drinking problem like Erofeev’s train-travelling Venya, has as much trouble with women as the heroes of Lermontov or Turgenev, and describes himself as “an almost dissident.” He satirizes one of his fellow guides, whose books are “banal, ideologically sound and dull.”

Dovlatov was born in 1941; his mother was an Armenian actress-turned-proofreader and his father a Jewish theater director. He grew up in Leningrad, studied Finnish and worked as a prison guard before he became a journalist. The Journalists’ Union expelled him for secretly publishing his early stories abroad, the KGB destroyed the letterpresses for his first book, and in 1978 he emigrated, following his family to New York  the following year. Dovlatov died in New York in 1990, but in the intervening decade he published what would become some of the best-loved Russian novels of the late twentieth century.

His identity as an émigré is crucial to Dovlatov’s writing, but he avoids sentimentality and derides Soviet author, Viktor Likhonosov, for his nostalgic love of folk verses, embroidered towels, samovars, icons, honey and caviar. Dovlatov’s narrator, considering emigration, says he would miss: “My language, my people, my crazy country...” although he “couldn’t care less about birch trees.”

Underneath the jokes is a serious internal debate about writing in exile: “My readers are here,” said Boris. “Who needs my stories in Chicago?” A feeling for other (often persecuted) Russian authors pervades his work: “First they drive the man into the ground and then begin looking for his personal effects. That’s how it was with Dostoevsky, that’s how it was with Yesenin, and that’s how it’ll be with Pasternak.”

Celebrated only posthumously in Russia, Dovlatov himself fits the pattern. The log cabin where he lived in Pushkin Hills has been recently converted into a museum. He describes this cabin in the novel, with its un-curtained windows, holes in the roof and gaps between the floorboards where stray dogs get in.

Listen to the critics

His wife Tatyana leaves the narrator, who finds solace “at the bottom of the bottle”; Boris compares himself with Pushkin, who also had “an uneasy relationship with the government” and “trouble with his wife,” but who is now remembered by legions of museum guides and “each one loves Pushkin madly.”

Despite the humor, Dovlatov’s ultimate subject matter is the difficulty of the human journey: “The only honest path is the path of mistakes, disappointments and hopes. Life is the discovery of the boundaries of good and evil through personal experience. There is no other way.”