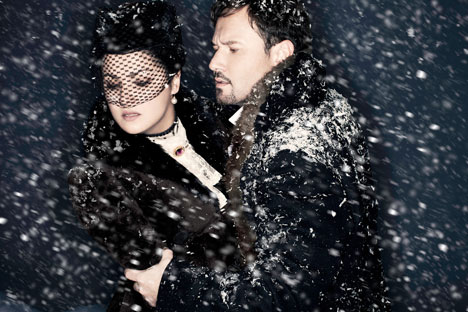 “Eugene Onegin” at the Metropolitan Opera, starring Anna Netrebko as Tatyana, will be more accessible than ever before, simultaneously broadcast in 64 countries.

Opera lovers are already abuzz with the news that “Eugene Onegin,” sung in Russian with music composed by Tchaikovsky, headlines the coming season at New York’s Metropolitan Opera. The season opens on September 23 and a new opportunity is in store for global viewers on October 5, when the live HD quality broadcast will premier in 64 countries.

The Met, a pioneer of globalized opera, offers a variety of remote viewings: The project ‘Live in HD’ brings opera productions to cinema screens in real time, enabling cinema viewers to watch the performance like a movie, while pauses are filled with backstage reports and interviews with the stars. For the at-home viewer, Met Opera on Demand allows viewing of recorded productions on your computer in HD quality.

“Eugene Onegin,” one of the signature Russian productions, is certainly worth experiencing. Alexander Pushkin’s original text is called a poem but it is really a novel in verse. Tchaikovsky later created what he called “lyrical scenes” inspired by the work, rather than a full-scale opera. Pushkin’s work is quite arguably the most revered of Russian poems on which a libretto is based. Russian children memorize excerpts by heart during elementary school, and Onegin quotations are spoken like proverbs. Many philologists write that more than any other writer, Pushkin gave Russian literature a direction, just as he reformed the Russian literary language.

Tchaikovsky wrote in a letter: “This opera will, of course, be without any strong dramatic action, but on the other hand it will have an interesting everyday life aspect to it." Source: Press photo (Lee Broomfield / Metropolitan Opera)

The story itself is simple: Onegin, a quintessentially cosmopolitan dandy from Saint Petersburg, then the Russian capital, arrives in the most provincial far-flung region where the quiet, young and dreamy Tatyana falls in love with him. Contrary to 19th-century mores, she pens him a letter in which she confesses her feelings and promptly receives a cold rebuttal.

Shortly afterwards, Onegin is challenged to a duel and kills the fiancé of Tatyana’s younger sister. He flees the area. Several years later, he once again meets Tatyana, this time at a high society ball. Tatyana is married to an influential general, and it is now Onegin’s turn to write a passionate letter. Her feelings for him have not died, however — well you'll have to see it for yourself.

With “Onegin” Pushkin writes a genuine “encyclopedia of Russian life,” offering an authentic portrayal of early 19th-century life in St Petersburg, Moscow and the Russian provinces.  It was in part this “Russianness” that attracted Tchaikovsky almost half a century later.

“This opera will, of course, be without any strong dramatic action, but on the other hand it will have an interesting everyday life aspect to it, and, moreover, just think how much poetry there is in all this!” he wrote in 1877 in a letter to his friend and patron Nadezhda von Meck. Tchaikovsky admired the poetry of Pushkin, who “through the power of his genius and talent very often bursts through the close confines of poetry into the boundless realm of music.”

Work on the opera coincided with a tumultuous chapter in Tchaikovsky’s life. It was not by chance that of all the scenes, the composer was most inspired by the moment when Tatyana confesses her love for Onegin in writing, and that this was the scene he completed first. Tchaikovsky also received a missive from a little-known girl in which she confessed her love for him. In contrast to Onegin, the composer began corresponding with her. They married in the summer of 1877, at the height of his work on the opera, with disastrous results. The composer realized very quickly that his wife was completely alien to him, and that he could not bear her company, let alone write music in her presence. To deal with the situation and to recuperate from the effects of stress on his health, Tchaikovsky went to Switzerland and Italy, where he finished the opera in 1878.

While working on Onegin, Tchaikovsky was beset with doubts, fearing that it would “never become established as a staple of the opera repertoire in major theaters … It is insufficiently lively and interesting for it to be to the public’s liking.” He placed his entire hopes on the “sincerity” of the work and that in composing it he was “obeying the irresistible demand of the soul.”

His other doubts stemmed from the challenge of finding suitable actors for the main roles, since theatrical traditions of the time dictated that the performers were of advancing years and ample proportions. But Tchaikovsky refused to deviate from the essence of the  characters, especially his delicate and much-loved Tatyana.

Today audiences may rest easy in her portrayal in Deborah Warner’s production at the Met: Tatyana is played by the beautiful and talented virtuoso Anna Netrebko. Having graced the world’s finest stages, this Russian diva is the first classical musician to feature among Time’s “100 most influential people in the world.”

Valery Gergiev, Netrebko’s ‘godfather’ in the opera world, will conduct – as he did for her debut at the Mariinsky Theater. Onegin is played by Polish baritone Mariusz Kwiecień. The performance is in Russian and is subtitled in English, German and Spanish.