Viktor Erofeyev: From Russian Beauty to a French knight 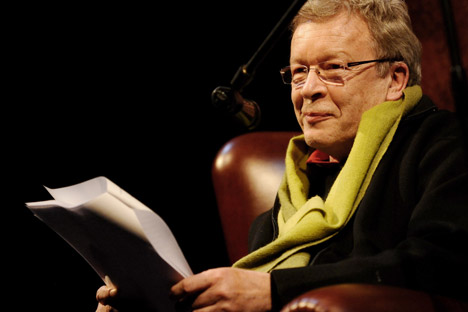 Viktor Erofeyev: “If a writer in Russia is doing what he does honestly then surely his books will evoke responses that will be different, whatever may happen”. Source: ITAR-TASS

The acclaimed author received the prestigious Legion of Honor of France. RBTH examines the dramatic twists and turns of the writer's literary path.

Viktor Erofeyev, who in recent weeks turned 67, has long been a citizen of the world. This elegant intellectual has written for The New Yorker and The New York Times, and he was the anchor of the program "Apocripha" (Erofeyev himself defined its format as “Platonic dialogues”) about literature and life on Russian television.

He is the editor of the acclaimed collection, “The Penguin Book of New Russian Writing.”

The Knight of the Legion of Honor is not the first major foreign award for Erofeyev – in 2006, the writer was awarded the Order of Arts and Letters of France. He has many connections with European culture – and he is no stranger to controversy, the spice of literary life.

His father was a diplomat and a personal translator of Stalin (the writer’s father, Vladimir Erofeyev, translated from French for the Soviet leader, and later was assistant director-general at UNESCO for five years), Viktor spent a good part of his childhood in Paris.

The essay that brought Erofeyev his first fame in Soviet literary circles was dedicated to Marquis de Sade, and the writer chose the theme “Dostoevsky and French existentialism” for his PhD dissertation.

Erofeyev quickly declared himself a rebel at the very start of his writing career, and in 1979 organized the publication of the self-published [samizdat] collection “Metropol”, where he published uncensored works of famous Soviet writers – including Vasily Aksyonov and the popular poet Bella Akhmadulina.

His underground publishing work would eventually cost his father his diplomatic career – a saga Erofeyev would later use as the plot for his novel "The Good Stalin,” which was also excerpted in The New Yorker.

From the underground to silenced to controversy

Erofeyev was not published in the Soviet Union for a decade after his involvement with “Metropol.” His popularity coincided with the collapse of the Soviet Union and his first novel, “Russian Beauty,” was published in 1990. It was a huge international success, and was translated into several dozen languages.

“My ‘Beauty’ came to the Frankfurt Book Fair in the form of a typewritten crumpled copy, it was the third copy. And suddenly, it was bought by the best publishers of the world: Viking, Penguin, Fisher, Anagram... I not only was absent at that fair, but did not know anything about such events,” recalled the writer in an interview with Ogonyok magazine.

However, Russia did not quite accept the avant-garde and candid “Russian Beauty” – as well as some other books by Erofeyev. After the publication of the “Encyclopedia of the Russian Soul” in 2009, 19 professors of his alma mater, the faculty of Philology of Moscow State University, from which Erofeyev graduated, repudiated the writer, calling his book a “Russophobe” tome that included “blasphemous” statements about Russian culture.

There were attempts to ban the book. Major cultural figures, including the prominent writer Vladimir Sorokin and film-director Pavel Lungin (“Taxi Blues” and “The Island”), supported Erofeyev.

“If a writer in Russia is doing what he does honestly then surely his books will evoke responses that will be different, whatever may happen,” Erofeyev said in an interview for the 2012 film “Russian Libertine.”

“I understood there are two choices for a writer in Russia,” added Sorokin in response to the pressure exerted on his peer. “Either you are scared or you write.”

The author is not afraid of shocking and challenging his readers with titles like, “The Good Stalin,” “The Russian Apocalypse,” and “The Light of the Devil.” He indefatigably tries to understand the mentality and motivations of the Russian people – he has repeatedly referred to this subject in his works of recent years.

His tone varies from light but insightful irony in the collection of short stories, “The Light of the Devil” (“to drag along the highway at one hundred and thirty kilometers an hour was a brutal challenge for the Russian man”) to the more rigid social satire in the novel “The Akimuds” (2012), where Russia is invaded by the dead and lives under their rule.

Erofeyev’s story, “Life of an Idiot” is considered to be one of his best. The brilliant avant-garde composer Alfred Schnittke, who died in 1998, created an opera inspired by the short work, and Schnittke remained a loyal fan and colleague.

Schnittke was a great appreciator of Erofeyev’s surrealism. “[Erofeyev] is a writer, not just an author of literary illustrations for incorruptible...moral laws,” the composer said. But Erofeyev is also a critic, Schnittke continued, who “knows everything and formulates everything clearly….There has not been such a joining of extremes in one person for a long time.”