Celebrating Aitmatov and his examination of collective memory 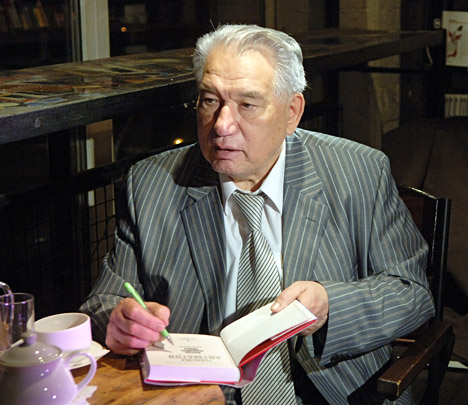 Coming from rural Kyrgyzstan, Aimatov brought to Russian literature the immensity of the steppes where a human being is only a small part of nature. Source: ITAR-TASS

The author of the acclaimed novel “The Day Lasts More Than a Hundred Years,” would have been 85 years old on Dec. 12.

When I was finishing school in the late 1980s, in the anarchic and utopian times of perestroika, I remember discussing in literature class the parable from Chingiz Aitmatov’s novel “The Day Lasts More Than a Hundred Years,” and what an impression it made on me.

The parable was about an Asian tribe’s ancient tradition of making their captives into perfect slaves called mankurts. The captives would be left for a few days in the desert without food or water, their heads shaved and wrapped in freshly cut camel skin. As the camel skin dried out, it pressed on the skull, making their hair grow inwards and creating unbearable pain. Most of those subjected to this torture died, but those who survived would lose all memory of their past and all human emotion. They would become the most valuable slaves: perfect, obedient and disposed to perform hard and tedious tasks. As long as they were fed, they never contemplated rebellion.

Reading this during perestroika, many of us compared this legend to the manipulation of public memory in the Soviet Union. Names erased from history, group photographs tampered with to get rid of characters who became undesirable, family members never mentioned because they were unlucky enough to perish in the GULAG. Many of us felt an attempt had been made to make us into mankurts.

Attempts at controlling and manipulating public memory are universal, as is the desire of those in power to control those who are not. I think this is why books by Chingiz Aitmatov are timeless. The writer, who wrote both in Russian and Kyrgyz, has several themes running through his work: the importance of the individual versus the system; the importance of memory, ritual and connection to one’s land and one’s people; the triumph of the spirit in humble people in difficult circumstances, and love for life in all its manifestations.

Aitmatov would have been 85 on December 12. He died in 2008 in Nuremberg, Germany. Coming from rural Kyrgyzstan, he brought to Russian literature the immensity of the steppes where a human being is only a small part of nature. Here domination of the animal kingdom is only possible in cooperation with it, and the human spirit has to be strong not to dissipate into the vast nothingness: “The steppe is enormous, and a human being is small.”

Aitmatov’s story “Jamilia,” brought him fame after Louis Aragon translated the story into French. It was called “the most beautiful love story in the world,” a love song to life itself. Why does the boy who jealously guards his sister-in-law against strangers, who obeys the rules and traditions of a small Kyrgyz village, become the accomplice in the illicit love between Jamilia and Daniyar? Is this because he is overwhelmed with the new ability that Daniyar’s singing awakens in him, of transcending his own self and understanding another human being and the beauty of the land?

Who is able to hold back tears at the scene of the old man saying goodbye to his dying horse in “Farewell Gulsary”? As Gulsary, the golden-colored pacer, lays dying, Tanabai thinks about the past. Life has tamed them both, the old man and the old horse. But was his life as worthless as some say?

Aitmatov’s novel “The Day Lasts More Than a Hundred Years” is the work in which he expressed most clearly his vision, and the importance of ritual and memory. He summarized this idea, saying: “From the ancient times till now, the desire to deprive a human being of his individuality has been one of the purposes of imperial, imperialist and hegemonic ambitions. A person without memory of the past, confronted with the need to define his place in the world… a person deprived of the historic experience of his people and other peoples, finds himself outside historic perspective and is only capable of living in the present.”

Chingiz Aitmatov’s books reveal his humanism, rooted in his culture but transcending far beyond it.