Husband translates Pavlova: Dedicated to the One I Love 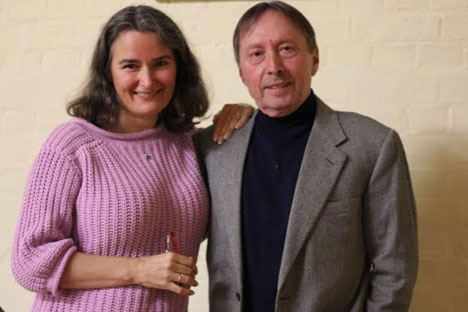 Seymour: 'The main difference with translating Vera is that my other clients don’t argue with me.' Source: From personal archive

“Most couples argue over who should have done the dishes – we argue over the right word in a translation,” Vera Pavlova said with a chuckle. “It’s incredibly cathartic and makes the rest of our family life very peaceful.”

Vera Pavlova is one of Russia’s most successful and prolific contemporary poets. In a career spanning two decades she has published 18 collections of poetry, including “Chetvertyi Son” (“The Fourth Dream”), which was awarded the prestigious Grand Apollon Grigoriev Prize in 2000. She has been translated into 21 languages, but it is only recently, with Steven Seymour as her trusted translator, that her poems are beginning to appear in English.

Seymour first heard of Pavlova through her poetry, which captured his imagination. He explains, “I didn’t know who she was or what she was, but I wanted to befriend her somehow or at least meet her.” When they did finally meet – and fall in love – he realized that the few existing translations of her work were very poor, and began working on his own versions.

Soon publications such as Modern Poetry in Translation magazine and The New Yorker printed some of these translations, which were ultimately published in a collection of 100 poems called “If There is Something to Desire” (Knopf 2010) which was a top seller among books of poetry in the United States.

For Pavlova it was worth the wait for a decent English translation. She began writing poetry in the grip of an “unbearable happiness” after her first daughter was born, and she retains the psychological association of motherhood towards her work. She describes translation as, “Terrifying, like having my children kidnapped,” but handing her poems to Steven, “Makes me calm, because he’ll take good care of them.”

Indeed, when you read Pavlova’s poetry, you get a sense of just why she has not been tackled by English translators before. Her poems are incredibly dense and powerful, rarely more than eight lines long. Many of them capture one particular instant in time or a burst of emotion poured onto the page, incorporating a wide range of subtle meanings and allusions in a very condensed space.

Pavlova claims, “I write with my whole body” and describes inspiration as, “An act of lovemaking with language.” She is clear that she is a feminine poet not a feminist poet and is concerned with feelings and emotions rather than, for example, politics. “Poets who push a specifically political agenda,” she said, “are making up for a lack of poetic skill – they compensate by appealing to the common denominator of politics.”

As a result, her works are intensely personal, dealing with concepts of love, death, grief, joy and sexuality alongside wry humor and even seemingly matter-of-fact statements about her daily routine: “I have brushed my teeth./ This day and I are even.”

Steven and Vera met on the March 15, 2001 at 19.00 p.m. in Spaso House, the residence of the U.S. ambassador to Russia, after Vera received an invitation to an official function there. When Vera met Steven, she met someone who already knew her poems by heart. After working in Moscow for 8 years, Steven returned to the United States where he continues working as an interpreter. They have been together for twelve years and married for seven.

This personal touch gives Seymour an immediate advantage in translating his wife’s work. “Almost all of my poems of the last ten years are dedicated to my husband,” the poet said. It’s easier for him because he’s lived through it and he knows the context.”

That is not to say that she will necessarily help her translator husband with the meaning of her often ambiguous work. Seymour explained, “I’ll ask her ‘did you mean ‘a’ or ‘b’, and she’ll just answer ‘yes’.” Sometimes their proximity can even lead to fireworks, when Pavlova, whose English comprehension is excellent, dips into the process to suggest a word or alteration. “The main difference with translating Vera,” Seymour said, “is that my other clients don’t argue with me.”

This emotion and intensity is all part of the experience for the pair. “A good translation is the same dream seen by two different sleepers,” Pavlova said. “And we really do have the same dreams sometimes,” Seymour added. They offer the tantalizing notion that she can write a poem in the morning – perhaps after waking from such a shared dream – and have it translated by the afternoon. That her translator is someone with such direct access to her inspiration is surely a relationship unique in the history of poetry.

Another element that marks Pavlova’s poetry is its intense musicality. A graduate of the Schnittke College of Music and the Gnessin Academy of music, she has also published several essays on music and cites Blok, who said, “There is nothing more necessary in the world than music.” For Pavlova, “Music is my homeland, my second language, my consolation – all my skills come from music.”

Hence a key feature of her style is an endless varying of the beat, the metrics and the scansion. A favored technique is to set up a contrast between sad subject matter and very playful rhythms and metrics. Combine all of this and you have an effect that is, as Seymour says, “Frankly quite frightening for the translator.”

Still, it is a challenge that he clearly relishes, describing the process of fitting together each element of his wife’s poetry as, “Like doing a crossword puzzle.” Following on from the success of “If There is Something to Desire,” Seymour has translated another 300 poems for a new edition, although no publication date has yet been set.

The pair has just completed a successful visit to the Aldeburgh Poetry Festival in the UK, which culminated in three poems being published in the Times Literary Supplement. In the longer term, Pavlova intends to write out her entire canon of poetry by hand. When Seymour translates these, he will be re-reading the poems that first drew him to Pavlova.

If There is Something to Desire

If there is something to desire,

there will be something to regret.

If there is something to regret,

there will be something to recall.

If there is something to recall,

there was nothing to regret.

If there was nothing to regret,

there was nothing to desire.

(poem from the book, “There is Something to Desire,” translated by Steven Seymour. Knopf, a division of Random House, 2010.)

Find out more about Russian literature in our Special project READ RUSSIA!