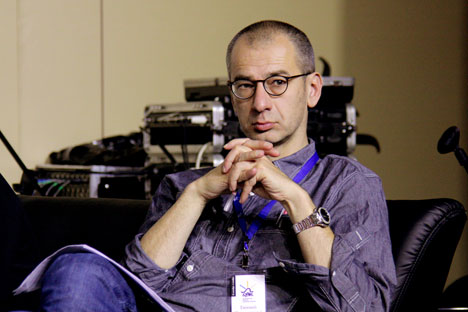 Having immigrated to the U.S. as a child, Eugene Ostashevsky is a rare case of a bicultural poet – although he writes in American English, his influences are mostly Russian.

Anyone who has ever been lost in time or space—as an expatriate, repatriate, or lost soul—can recognize him or herself in Eugene Ostashevsky’s poems.

Ostashevsky is a St. Petersburg native who immigrated to the United States with his family, Jewish refugees, and was raised in New York City. He is a poet who writes in English and translates poems from Russian to English. His collections of poetry, “The Life and Opinions of DJ Spinoza” and “Iterature” were published by Ugly Duckling Press. In the funny “Now the Lord said to DJ Spinoza,” Ostashevsky writes in the voice of God, “I shall make you lost among nations.” In the same poem, Spinoza asks God if “there is another God above you,” and the Lord replies: “Read my lips: get out of your country.”

The Brooklyn-based poet, Ostashevsky is also the translator and editor of “OBERIU: An Anthology of Russian Absurdism,” and the translator of  “An Invitation for Me to Think,” by Alexander Vvedensky.

Eugene is a rare guest in Russia. RBTH correspondent Alexandra Guzeva caught him in the heart of Siberia, at the Krasnoyarsk book fair, to talk about Russian and American poetry.

Eugene Ostashevsky: It was the era of Jewish emigration, which as you know happened in the 1970s, right before the Afghan war. I was ten and I came with my family.

RBTH: How did you get your start as a translator?

E.O.: In 1990 I went to Stanford University to do a PhD. At the Stanford Slavic department my year there was Alexei Parshchikov, our friend Andrei Ustinov, me and three American students. Parshchikov introduced me to his Californian contacts, Language School poets, whose work I did not know at the time.

Alexey Parshchikov (1954 – 2009) was a Russian poet, one of the founders of “meta-realism” movement, laureate of numerous prizes in poetry and literature. In 1993, while living in the US, Parshchikov received an MA from Stanford University. His works have been translated into English and German. The establishment of metaphysical links between times and epochs  is considered a key theme of Parshchikov’s poetry. He resided in Cologne, Germany, and died there in 2009.

I did know something about experimental American poetry but it was fairly random. So in a way my first experience was when I was helping the American poet and translator Michael Palmer translate Parshchikov. We worked pretty slowly and carefully. I went over to Michael Palmer’s house once a week for couple of months. Looking back, it was quite a bit of education in translation. But I’d say it was a very de-Russifying education because Palmer translated according to very non-Russian principles.

Joseph Brodsky expressed the main Russian ideal for translations: Rhyme is rhyme, meter is meter. For me the meaning changes depending on language, depending on culture and depending on the historical period. It’s not automatic for me that something should be done in the same meter. And I learned this from Palmer, who was on the one hand super-sensitive but at the same time his method, his idea of what we should do, was rather different. So that’s how we started.

RBTH: Were you already a poet yourself at the time?

E.O.: I started writing poetry in high school and then in college, at once in English, because I was young when I came to the States. When I came it was 1979. The people who move to the States now can go back for the summer, but for us the doors were closed, that was the end. I don't think I even considered writing in Russian, that would have made no sense.

RBTH: A question about the difficulties of translation – Did you ever discuss with Parshchikov what he meant in some poems?

E.O.: My translations of Parshchikov were done pretty early and I was much more sure of myself than I would be now that I have more experience.

A review on the collection of poems translated by Ostashevsky

If I did it today, I would try to work with Parshchikov closely. The other thing however about working on translations with Russian poets (my friends I mean – Parshchikov, Dragomoshchenko, Golynko) is they all speak English, they all respect their translators, and maybe they kind of don't want to be involved. So in general when you ask them a question, they don't answer you, they tell you just to do something interesting.

RBTH: How can you comment the situation with Russian contemporary literature and poetry in the U.S.?

E.O.: It really depends. In the U.S. there's no unified curriculum. Everybody does something different. At the same time the literature market consists of niche markets. Once I spoke to [the renowned poet] Lawrence Ferlinghetti and he asked me how Voznesensky and Yevtushenko were doing. For Beat poets these are the poets who matter.

The translations of Mandelstam into English are terrible. I don't know if it's theoretically possible to do a passable translation of Mandelstam. I can say this without being a jerk because I worked on this [on translating Mandelstam].

1969 was the last moment when poetry was popular in the United States. And then there was a tremendous drop. It stopped being something important to people who are not themselves poets.

Most of my American poet friends are not fans of Yevtushenko or even Brodsky, like earlier generations. My friends are younger, experimental poets who tend to be students of Language School people, of friends of Dragomoshchenko. I am putting out an edition of Arkadii Dragomoshchenko's selected poems which is coming out in January.