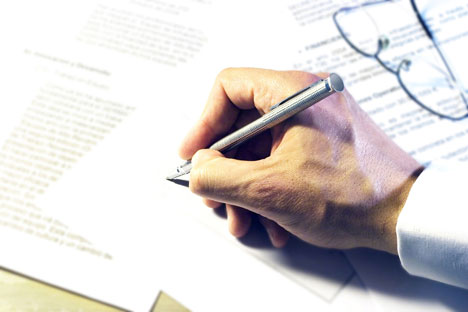 Top translators of Tolstoy and Pelevin talk to RBTH about misunderstandings, cultural differences and how not to get lost in translation.

Each year scores of books are translated from Russian to English. This year has seen publications in a range of genres, from Mikhail Bulgakov’s diaries to the surreal poetry of Alexander Vvedensky and Leo Tolstoy’s philosophical tracts. The long list for 2014’s Rossica translation prize includes 45 books.

Robert Chandler is one of the best-known Russian-English translators. He has brought classic works by Andrei Platonov and Vasily Grossman to English-speaking audiences. Chandler told RBTH: “For long, seemingly difficult Russian words, the dictionary is usually adequate.  But the shorter the word, the more meanings it is likely to have and the greater the scope for misunderstanding.”

Cultural differences between Russia and the West also complicate the use of language. Cambridge-based translator Arch Tait points out that you cannot assume a reader's familiarity with the Russian culture: “Does everybody know what a dacha is? A matryoshka? A babushka?”

“Many English-speaking readers are familiar with details of life in nineteenth-century Russia, which helps, but the “Soviet experience” was so odd, much is untranslatable,” Tait told RBTH. “It is difficult even to know how to refer to the place: it wasn’t a nation, it wasn’t a country – it was an ideological claim. Was Solzhenitsyn a Soviet writer?”

Tait has 25 translated titles to his name, and counting. He won an award in 2010 for his version of Anna Politkovskaya's book “Putin's Russia” and has worked with many well-known authors, including Ludmila Ulitskaya and Victor Pelevin. He described Russian grammar to Publishers’ Weekly as “geek paradise” and says he has probed “the murkiest recesses of Russian army chat rooms for scurrilous or discreditable slang” in an effort to keep up with contemporary Russian.

Washington-based poet and translator Katherine E. Young is impatient with the nit-picking approach among some critics of works in translation. “Most translators I know in the U.S. start as language students,” she told RBTH, “meaning we have to unlearn the idea that a ‘good’ translation involves a word-for-word correspondence with the Russian…  I myself look at translation as a performance, much as a musician would perform: there's a score, yes, but it must be interpreted.”

Husband translates Pavlova: Dedicated to the One I Love

Martin Dewhirst, a Russian expert with more than half a century’s experience of translation told Academia Rossica: “As a rule, a literal translation of a literary work falls completely flat, so translators are obliged to add at least something of their own...” Accuracy is still vital. Anna Gunin who translated German Sadulaev’s “I Am a Chechen!” warns against the number of “false friends” between Russian and English” and advises “double-checking cognate words in a monolingual Russian dictionary.”

Mikhail Shishkin’s extraordinary novels have been translated into 25 languages. The U.K. publisher for his novel “The Dark and the Light” sent him three sample translations of the same extract with no single phrase translated alike. This was “not because one translator was better than another,” Shishkin explained to “The Morning News,” but “just because three different people translated it from three different life experiences, tastes, world outlooks.”

Shishkin’s postmodern texts are particularly difficult to convert into another language. Marian Schwartz, who translated Shishkin’s “Maidenhair”, told RBTH: “His array of voices … is dizzying,” with the challenge exacerbated by quotations, neologisms and even “an entire page that is at least half palindromes!”

Schwartz says her biggest challenge is finding the right books to translate and would like to see more “books that would appeal to a broader audience.” Many translators find themselves struggling to interest the general, English-reading public in contemporary, Russian literature. “Most Russian texts are too long to begin with, and tend to get longer in the process of translation,” said Arch Tait. He even feels that with poetry, “The effort required to make it travel well is usually disproportionate to the impact it is likely to produce.”

“You can’t do everything on-screen,” said Tait. “At some point, often twice, the text needs to be printed out.” He makes the daring assertion that “Google Translate can sometimes have better ideas than I do” and prefers “not to know how a story or novel ends while translating the first draft.” Like many translators, Tait’s love of Russian books borders on obsession: “Once started on a translation, I tend to neglect all other duties until it is finished.”