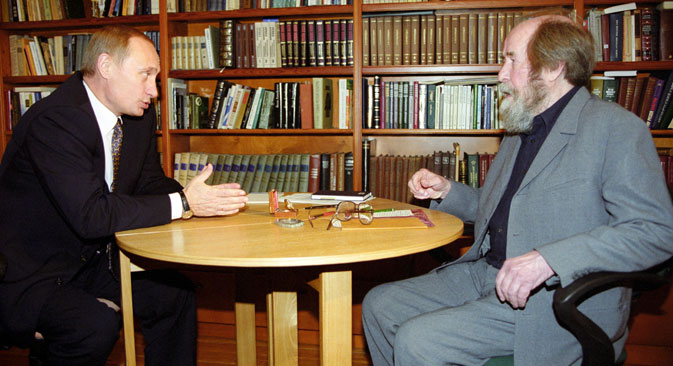 In September 2000, Putin visited Solzhenitsyn(R) at his home in Troitse-Lykovo. Source: ITAR-TASS

For Russian literature, it’s time again for a political choice: for or against Putin? RBTH presents an overview of the problem and interviews experts.

Russian literature and government power have always had something of a love-hate relationship. There have been periods when writers were exiled or put before the firing squad. There have also been eras when they were honored, respected and listened to. Immediately after the breakup of the Soviet Union in the 1990s, there came a period of mutual indifference between Russian writers and the government. Amid bitter political infighting, wars, and economic crises, the Russian society and the powers-that-be clearly had things other than literature on their minds. The writers responded in kind: for a while, writing about politics - or indeed even paying it any heed - was considered mostly unacceptable in literary circles.

Join our readers' poll and win a Russian book

That period is now over. The Russian power and the writers are paying much more attention to each other again. After long years of indifference, they are returning to mutual attraction and repulsion. The attitude towards politics, the opposition, to the power in general, again became as important for people of culture and arts as for the rest of Russian society. The old Soviet slogan “Artists, whose side are you on?” is once again relevant.

The recent meeting between President Vladimir Putin and writers has once again divided the literary community into two camps: one group wanting to cooperate with the government and receive preferential treatment, the other one opposing the power through books, newspaper opinions, and during street protests.

It all began seven years ago in 2007, with a presidential reception at Novo-Ogarevo. That is when Putin first met with young and politically active writers, including the famously provocative Zakhar Prilepin, an outspoken critic of the government. During that meeting, the president resurrected the Soviet idea of awarding state contracts for writing books. The government’s priorities in offering such contracts, the president said, should include “propaganda of a healthy lifestyle, family values, and the Russian army, as well as the war on drugs." The participating writers offered the president to set up a national organization of young, talented authors. This initiative reminds of a bygone era, when Soviet literature was steered by government officials in the same way they controlled collective farming.

On one hand, it is best to be independent. But on the other, how can one stay indifferent to the fate of the motherland? The answer depends on each individual’s convictions and aspirations. Many writers - including young ones - are attracted by the prospect of organized and sheltered existence under the government’s wing. As the government grew stronger, the attitude towards it again became determinative for any writer’s position. And if so, it’s time to meet up and talk things over.

The meetings between the president and Russian writers have become a frequent occurrence. Some writers, such as bestselling detective novels author Boris Akunin, have made a point of refusing to take part, and made sure their readers are aware of that choice. Others have accepted the invitation, taken up various official positions, and expressed their support for the regime. Still others, such as the writer and TV presenter Alexander Arkhangelskiy, have used these meetings to draw Putin’s attention to various pressing problems facing the country (the Khodorkovsky case being one of them).

Questions have been put to the president about corruption, the drug epidemic and political prisoners. There have been attempts at criticizing the government in general and Putin personally. In response, the president said the government "must, on occasion, face criticism," but that criticism must be voiced "in a talented way." In essence, that signaled Putin’s refusal to take the writers’ criticisms seriously. Still, he continued to meet them, again and again.

Even such a giant as Nobel Prize winner Aleksandr Solzhenitsyn felt attracted to the current Russian power in the 2000s. Famed for his vehemently anti-Soviet views, Solzhenitsyn wanted to be involved in building a new Russia according to new, non-Soviet principles. In large part to do that, he returned to Russia from America, where he had lived for many years.

In September 2000, the president visited Solzhenitsyn at his home in Troitse-Lykovo; the two had a long conversation. The writer later spoke favorably of the president, and said that he “gave him some bits of advice” on running the country. The second time Putin paid a visit to Solzhenitsyn was to congratulate him on receiving the highly prestigious State Award. When Solzhenitsyn died, the president attended his funeral and put a wreath on the coffin. That is how Solzhenitsyn, the staunchly anti-Soviet and anti-Stalin former Gulag prisoner, was posthumously proclaimed a supporter of strong government.

Apart from mutual attraction of power and literature, there is also rejection and even confrontation. The first outward sign of that confrontation was a public action against the writer Vladimir Sorokin, staged by “Walking Together," a youth movement created by the Russian president's office. The action was held outside the Bolshoi Theater, which had commissioned Sorokin to write the libretto for a new opera. The activists accused the writer of pornography, and dumped his books into a huge toilet. There are few Russian writers who are less interested in politics than Sorokin was. But if you aren't interested in politics, politics will get interested in you.

In 2012, Russian writers participated in mass anti-government protests. They addressed the rallies, became members of the opposition's Coordination Committee, and even staged a protest march of their own, "Walking with Writers." The “walk” was a protest against the numerous detentions of opposition activists after a big rally on May 6 in which several thousand took part. The march began at the Pushkin memorial. The "walkers" included such renowned authors as Boris Akunin, Lyudmila Ulitskaya and Dmitry Bykov. The march went off peacefully and without incident. It also garnered a great deal of press.

Another case of a writer opposing the Russian government is Mikhail Shishkin, the author of the acclaimed novel “Maidenhair”, who lives in Switzerland. In the spring of 2013 he sent a letter to the Federal Agency on Press and Mass Communications of Russia, saying that he declined to represent Russia at BookExpo America 2013 because he was not ready to be a representative of a country “in which the government has been seized by a corrupt and criminal regime, where the state is a pyramid scheme run by thieves, where elections have turned into a farce, and the courts serve the government, not the law.”

The letter caused quite a stir in the Russian media, but turned out to have no impact on his popularity or his publishing contracts in Russia.

And finally, the Citizen Poet TV project, where the actor Mikhail Yefremov recited satirical poems written by Dmitry Bykov. Many of these poems were scathingly critical of the government. The project was a runaway success, with numerous performances before a live audience. The targets of Citizen Poet's vitriol included the most senior government officials. One of the ironies of the current situation is that the books by authors who are openly critical of the government remain on the shelves of the bookstores and are very popular with Russian readers – nobody even tries banning them.

Is it a duty for a writer to have a clear political stance these days? We have put the question to three prominent figures of Russian contemporary literature.

- It is not a duty. It’s up to each individual person. Authors become what they are because they write, not because they have a political stance. The author’s political views will obviously be reflected in some way in any book that has relevance for current affairs. But the authors’ ideas remain in their heads; we only see what they have managed to express on paper.

In 50 or 100 years’ time, that author’s political position could well become merely a historical footnote, of interest only to scholars. Ivan Bunin and Andrey Platonov are both classics of Russian prose, though they had very different, even opposite attitudes to the Soviet regime.

- Writers are almost always dilettantes in politics, economics and most other fields. Their ideas about how things should be done often prove to be complete rubbish. But because they can express their ideas more persuasively than most, that rubbish can also look persuasive. In most cases, a writer’s opinion is no more and no less valuable than the opinion of the average Joe... Unless the government is violating some fundamental norms, a writer would be entirely justified to remain indifferent to it. In truth, there are only two things a writer needs the government to do: protect the country from external aggression, and enforce the rule of law.

- It is more interesting these days to have a political position than not to have one. It is also more profitable. No one, or next to no one, cares about books these days, to be perfectly frank. But a clear political position is in great demand. Everyone wants to know whether you support Putin or oppose him. Of course, Putin himself doesn't care a whit. The social standing of literature is so miniscule these days that the government can afford to ignore it altogether. That’s why we don’t have censorship: the government lets the writers say whatever they wish because it doesn’t make any difference or influence.

Literature and authorities in Russia have always been in controversial relations. They either love each other or come up against each other.

To hear your opinion about the relations between power and literature in your country, we conduct a readers’ poll. To participate, submit your comment answering to the following questions:

What's the situation with the censorship and political pressure on the writers in your country? Also, is being generally politicized good or bad, in your opinion, for a contemporary author?

To participate in the poll, you must submit you comments till Feb. 18. You can either leave your comments via Facebook in the section below, or email them to: contest@rbth.ru

The authors of 5 most interesting and thorough stories about your countries would be able to win our special prize – digital copies (eBooks) of modern Russian literature (including political fiction) in translation!

The winners will be chosen by our expert, Andrey Vasilevskiy, literary critic, poet, and editor-in-chief of “Novyi Mir”, one of Russia’s leading magazines for contemporary poetry and prose.

The winners would be announced on Feb. 21. Also Mr. Vasilevskiy will share his thoughts on your stories in an exclusive video interview for RBTH.

Do comment, take part in discussion, and receive your eBook!

The prizes are granted by Glagoslav Publications.

Dear readers! We have extended the deadline of our contest! We'll be happy to accept your comments up to Feb. 18. Give your opinion and win a book!