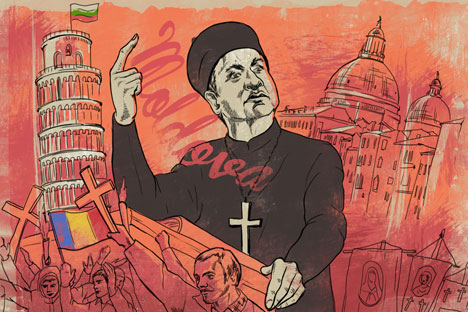 In his new novel The Good Life Elsewhere Moldovan writer Vladimir Lorchenkov tells the story of a group of villagers and their tragicomic efforts, against all odds and at any cost, to emigrate to Italy for work. All together, at the same time.

In Lorchenkov’s uproarious tale, an Orthodox priest is deserted by his wife for an art-dealing atheist; a mechanic redesigns his tractor for travel by air and sea; thousands of villagers take to the road on a modern-day religious crusade to make it to the promised land of Italy; meanwhile, politicians remain politicians.

A country where 25 percent of its population works abroad, where alcohol consumption per capita is the highest in the world – this is a country that surely has its problems. But, as Lorchenkov vividly shows, it’s a country whose residents don’t easily give up. RBTH presents an excerpt from the funny and tragic The Good Life Elsewhere. Translated from Russian by Ross Ufberg, the book is out February 18 in New Vessel Press.

In the fall of 2003, the Moldovan priest of the village of Larga, Father Paisii, announced the First Holy Crusade of Eastern Orthodox Christians to the unclean land of Italy.

The reasons rousing the priest to this desperate act were many. But most important among them, as usual, was a lack of money. Father Paisii understood that he’d never see Italy if he had to raise the funds himself to get there. A village priest in a godforsaken parish doesn’t have a shot at collecting four thousand euros. And since he couldn’t pay his way to Italy, Father Paisii decided he’d have to make his way there at the head of Christ’s Army. He’d read about the Crusades in seminary, where he’d been a solid C student. This decision worthy of Solomon’s name came to Father Paisii not after a long discussion—he had no great love for long discussions—but in the middle of a sermon. The decision was lucid, immediate, and brief. Like a blaze, or a holy prophecy.

Father Paisii was delivering a sermon about Italy.

“And what is this impious country? Can it be the source of all our troubles and misfortune? There are some who will say, ‘We live on the money sent to us by our loved ones from over there.’ But how is this money earned? Our virtuous girls sell their bodies while our husbands, like the Israelites when they were slaves in Egypt, hang their heads and hold their tongue against their hosts, for money that means nothing to the bosses. Who gave these people the right to humiliate poor Moldovans?”

The parishioners listened to Father Paisii, who had fallen into an open-mouthed rage. The priest’s sermon was becoming more and more apocalyptic.

“And does it not say in the Gospels, it is easier for a camel to pass through the eye of a needle?” asked Father Paisii, the Bible shaking in his hand. “And if it so sayeth, then why does the abominable Italy live with a full belly and contentment, while we here are impoverished, starving, and beggars all. And who, my children, who are the true Christians? The Italians, who sold themselves to that false Latin faith? No! We’re the true children in Christ, and it stands to reason, everything is ours to possess. And so, let us seize everything from the impious and give it to the pious!”

The sermon was becoming more lucid and forthright. The parishioners, mouths still hanging open in amazement, began to understand what the priest was driving at. Many of them were starting to view Father Paisii with approval.

“Seize everything from the impious and give it to the pious!” The phrase rang out through the church.

Timid applause broke out from somewhere.

Father Paisii wrinkled his brow, cleared his throat and took a sip of dark wine from the gilded plastic chalice. His throat felt stuffed with cotton. The wine was dark, not because it was pressed from dark grapes. It was all because of the dust and the parishioners who couldn’t pay for the services of a cleaning lady in the church. “That’s why the place is a pigsty,” the priest thought to himself angrily.

“We, children of God, live as in a pigsty, praying to Him just as the apostles commanded. And Italy, this Italy, which lives off the sweat of the brow of our sons and daughters—Who can say why?—this Italy grows fat and prospers. Is this fair, my children? For it says in the Bible … ”

The parishioners once again grew bored. Paisii realized with relief that they didn’t want him to quote more holy books, they wanted a call to action. He changed the format of his speech.

He jumped onto the ambo and in front of the holy doors. “Now hear me! Take heed, for it is not every day that the priest stands here on this holy spot. My children! We must take back that which was taken from us! Do you desire it? Answer yes, and I will lead you there, naked and proud, as Adam led Eve through the Garden of Eden until their expulsion. Do you desire it?”

“Yes!” roared the church, for who among the villagers did not want to go to Italy? And who among them had money? “We desire it!”

“I will lead you there,” shouted Father Paisii and removed from beneath his cassock a sword, where he’d been keeping it for just such an occasion. He’d found the sword in an old funerary mound outside of Larga. “To slay the impure and give their wealth to the pure! Hark to my words and pass them on to your brothers and sisters, your beloved ones and your enemies. And listen, therefore …”

White from worry, his nostrils trembling, Father Paisii waited until the ovation was finished and raised his hand again. From a corner of the church the video camera for the local television station started recording.

“This is alright,” thought Paisii and waited for the red light to come on before talking.

“I am calling you to defend the true faith of God. Orthodox Christians of Moldova! The time has come for us to go to impure Italy and free our two hundred thousand countrymen, as Moses freed the Israelites from slavery in Egypt. But while Moses was unarmed, we will use force to grant our brothers freedom!”

“Hurrah!” they called out in the church. “Down with Italy!”

“I am calling for a crusade to Italy,” bellowed Paisii. “Let it be so. I give you my word as a pastor, my children, that all who venture forth there, if they shall meet demise, henceforth their sins will be absolved.”

“Verily!” they answered in the church, the golden flames of their candles growing fuzzy before Paisii’s eyes.

“Those who would fight against their fellow believers, those who fell and those who killed their brothers in war in Transnistria—let them take up arms against the unbelievers in a battle which will bring us an abundance of spoils. We were forced to kill one another for a long time, but isn’t it better to unite and attack the nonbelievers? Let the veterans take up arms.”

“That land flows with milk and honey,” said Paisii, brandishing his sword. “He who once was a thief, shall be a warrior today. Whoever has done battle with his fellow believer: Come with me!”

“Whoever here is wretched, shall be wealthy there! And so, my children, tomorrow we take up arms.”

The far-off shouts of the crowd mixed into one regular rumble. Later, Father Paisii fearfully admitted in his heart that amongst the howls and the noise he clearly heard somebody’s subdued shout, “Goal!” He even heard somebody emit a cheer for the Chisinau soccer team. The one thing Paisii, grandson of a Jew, did not hear was a cry of “Kill the Jews!” He let out a sigh of relief.

That evening they carried the priest home on their shoulders. It was a true triumph for Paisii. His terrified kiddies watched as their father was carried into the courtyard. Afterwards, the people dispersed to prepare for the crusade, while the priest barely made it to the front door on his wobbly legs. After he had calmed down, Paisii sharpened his already-sharp knife—“Too bad the blade’s a bit short,” he thought—and grabbed a massive cross. He threw together a bag of provisions. He gave a slap on the withers to the young mare he was planning on traveling with and caught a few winks. In his dreams he saw miraculous vineyards in Italy which he, Paisii, would pass on to his children in a chain of eternal possession, after the crusade had ended in complete and definitive victory for the holy warriors of Moldova. In his dreams he saw the full, milky white arms of his runaway wife, like those shameless Madonnas in the Italian frescoes …

At six in the morning, Paisii had somewhat recovered from the dark wine in the plastic chalice and was tormented by thoughts of the future shame this day would bring him. At seven, waking up for good, Paisii rubbed his eyes a minute, went out into the yard and smiled awkwardly and confusedly. The priest was in shock.

Surrounding his house was a well-armed crowd, heaving, holding their religious banners. There were seventy-five thousand people from across Moldova. Upon catching sight of Father Paisii, the crowd applauded. Old Man Tudor brought Paisii his little horsie and hefted him up onto the saddle. As if watching a sporting event at a stadium, the crowd gave him a real welcome: they did the wave. The priest sensed another, warm type of wave, one which swelled up through his breast to his heart and which he couldn’t hold back. His tears were warm as a mother’s hands.

Tudor put on a Romanian infantry helmet from World War Two. “Verily, it’s unbecoming for us, old men-at-arms, to cry. Wipe away the tears and lead us to Italy, Lord!”