Russian fantasies for rebels and escapists 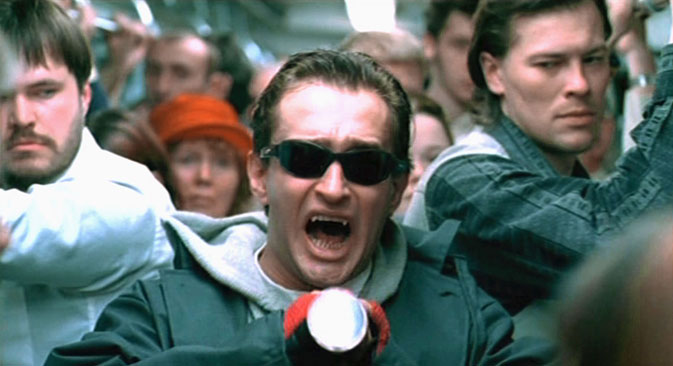 Anton Gorodetsky, hero of the “Night Watch” series, belongs to the Night Watch and patrols the activities of Dark Others. Source: RIA Novosti

New novels from some of Russia’s most inventive writers are published in English this year.

If you thought Russian literature was all about princes waltzing through Petersburg, or impoverished students murdering old ladies, these books will surprise you. Often neither realistic nor depressing, contemporary Russian fiction and fantasy envisages strange new worlds or ferociously satirical futures

In recent years, many Russian fiction and fantasy books have been translated into English. Among them is the fifth volume of Sergei Lukyanenko’s supernatural “Night Watch” series, and “Metro 2034,” a follow-up to Dmitry Glukhovsky’s thriller set in the tunnels of a post-apocalyptic Moscow metro.

Part four of Max Frei’s “Labyrinths of Echo” and new translations of novels by the pioneering Strugatsky brothers, who influenced all these writers, are due out this year.

Russian authors have been creating fantastical worlds for centuries. The aristocratic polymath Vladimir Odoevsky was one of the earlier proto-science-fiction writers; in 1825 his short story “Two Days in the Life of the Terrestrial Globe” briefly envisaged a cosmic catastrophe with global implications.

A century later Evgeny Zamyatin laid the foundations of the dystopian tradition in his novel “We,” providing the model for George Orwell’s “1984.”

Slang of the future

The oprichniki were originally Ivan the Terrible's army of bodyguards. Here they inhabit a brutal world that is simultaneously medieval and futuristic. Sorokin uses a mixture of archaic Russian terms, invented slang, songs and rhymes. His unorthodox use of “future” language, beautifully conveyed in translation, makes the fictional reality come surprisingly alive.

Another modern writer, Viktor Pelevin, uses fantasy for satirical purposes. His most recent book in English is “The Hall of the Singing Caryatids.” In it, young Lena is injected with a classified serum and employed to stand naked for hours and sing, becoming a decorative pillar in an elite underground nightclub.

Pelevin’s psychedelic postmodernism has been puzzling and delighting readers for decades. The hero of his first novel, “Omon Ra” (1992), becomes a cosmonaut, only to find himself part of a farcical mock-heroic moon landing in a derelict underground tunnel. Both Omon and Lena are victims of the systems they live under, kept – literally and metaphorically – in the dark.

Pelevin has had no trouble shifting his satirical focus from the absurdities of the communist regime to the iniquitous consumerism of the post-Soviet epoch. His “Generation P” (titled “Homo Zapiens” in the U.S.) already a cult novel in contemporary Russia, describes chaotic 1990s Moscow through the eyes of a poet-turned-advertising copywriter.

Sergei Lukyanenko also uses Moscow as a backdrop. The first novel in his “Night Watch” series was published in 1998, becoming a bestseller and a magnet for magic fans. Anton Gorodetsky, hero of the series, belongs to the Night Watch and patrols the activities of Dark Others. The novel was also made into an international blockbuster directed by Timur Bekmambetov.

In his books, Lukyanenko weaves supernatural imagery into a recognizable landscape. The fifth book, “The New Watch” opens in a Moscow airport with an overweight child screaming prophetically about a plane crash.

The ensuing adventures send Anton traveling through the parks and playgrounds of London and the skyscrapers and pagodas of Taipei.

In Lukyanenko’s gripping narrative, Jedi-style mind games, soul-freezing creatures or charming vampires are cheerfully reminiscent of everything from Star Wars to Stephenie Meyers, with allusions stretching from Dostoevsky to Peter Pan.

Another popular, but very different series of escapist fantasies is Max Frei’s “Labyrinths of Echo.” The hero and narrator is an overweight joker, who becomes an investigator in a through-the-looking-glass world. Max Frei is actually a pseudonym for Svetlana Martynchik, a Russian artist who lives in Lithuania.

The latter turns out to confer invisibility, putting us for a moment in Potterian territory, but these light-hearted adventures have a distinctive flavor of their own, drawing on darkly comic Russian traditions.

The fourth book, “The Stranger’s Shadow,” includes lines like: “to violate your job description for the sole purpose of having fun is one of the pillars upon which our organization stands.”

Glukhovsky’s dystopian novel “Metro 2033,” with its shoot-outs and faceless mutant enemies, has become a hugely successful computer game. But the written version recognizes that real life can’t just “start all over again” and mixes action sequences with philosophy.

“Metro 2034” is even more reflective. Old Homer, once a metro worker called Nikolai, wants to write a history of this post-apocalyptic, underground world.

The novel includes flashbacks to the time before life was “scorched by the withering breath of Armageddon” and the story draws on urban legends of the huge secret network of passages constructed underneath the public system.

Homer travels through the tunnels with the teenage orphan, Sasha, in a tale of survival, a claustrophobic journey through the “last refuge of the human race.”

Whether extra-terrestrial or subterranean, satirically real or purely imaginary, the worlds these authors create are vivid and compelling. They take readers to the end of days and the edge of possibility.