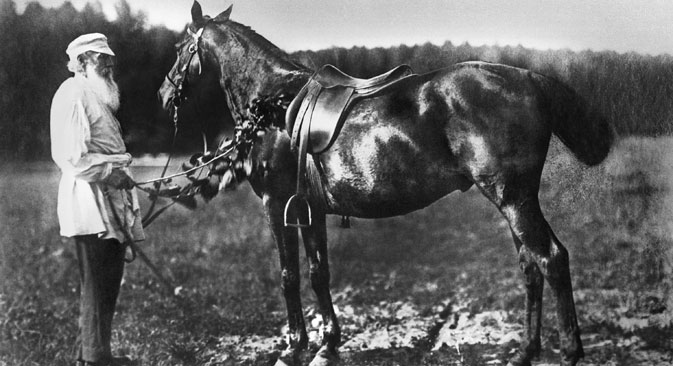 Leo Tolstoy and horse in the fields at his family estate of Yasnaya Polyana. Source: ITAR-TASS

Count Leo Tolstoy was more than just a novelist – he was a soldier, a philosopher, the founder of a new religion, and an eccentric humanist. A cultural and moral authority, in his later years he suffered an existential crisis that ultimately led him to a lonely death.

Tolstoy is one of the few Russian writers to enjoy phenomenal popularity with Western audiences. But then, he is more than a writer. He is also a philosopher, a founder of a new religion, and a proverbial bearded old mystic who walked barefoot summer and winter. He is the mainstay of numerous jokes. A preacher. A guru. Lenin called him “the mirror of the Russian Revolution.” Tolstoy's entire life is a work of art. It could have constituted a plot at least as intricate as that of his War and Peace.

In his younger years he drilled himself in way a future superman would. No indulgence was permitted. He used to hold heavy dictionaries in his outstretched arms, and flogged himself on his bare back. He trained his willpower to become a man comme il faut, a true nobleman. He spoke perfect French, was gallant with the ladies, and enjoyed a game of cards or two – often running up gambling debts in the process. Once, walking along the street with his brother, he spotted a man coming in the opposite direction. Glancing at him, Tolstoy observed dismissively, “This gentleman is surely a rotten fellow.” “How so?” asked his brother. “He's got no gloves,” replied Tolstoy. Just so. A man wearing no gloves was not good enough.

How would Leo Tolstoy use the internet?

Fired by an enthusiasm for new impressions, he went off to battle. He got impressions galore there. In the Caucasus, a grenade once burst out at his feet. Some time later, he was nearly captured by Chechens in the mountains, only escaping by the skin of his teeth after a breathless gallop away on horseback. Scarcely had he returned from the Caucasus than he hurried to the Danube to fight the Turks, taking a detour home by way of Sevastopol. At that time Russia was in and out of war, and so was Tolstoy. No wonder warfare is such a recurring theme in his books.

Back in Petersburg, his works were accepted for publication. Recognition was not long in coming - and at the very highest level. Nicholas I's widow was known to weep over his Sevastopol Sketches and Alexander II had the work translated into French. But Tolstoy then turned his back on everybody and abandoned the high life for his ancestral village. The writer seemed to be more invested in agricultural issues than in his burgeoning literary career.

His serfs were rather fond of him, though they thought their squire a crackpot: “You would come to the squire for your orders and what would you see but the squire himself dangling head-down from a bar by his knees, swinging to and fro; his hair tumbling and the face bloodshot; you never know whether to marvel at him or listen to his words.” This was the manner in which Tolstoy used to carry out his exercises.

In the countryside he was a Jack of all trades: He made hay, he ploughed, and he taught peasant children. Tolstoy even set up his own unorthodox school, featuring neither textbooks, nor copybooks, nor homework. He used to take his pupils for walks in the nearby woods, where, settling them down, he would speak to them of life, telling stories and answering their questions.

When the time came to get married, he chose 18-year-old Sophia Behrs for his wife, and they wed in 1862. Sophia subsequently bore him a succession of children, but besides being a mother, Sophia was a remarkable woman. As if bearing his quirky temper was not enough, she acted as his long-suffering secretary. Four or even seven times, as the story goes, she rewrote War and Peace by hand, heard him out and even gave advice – the true wife of a writer.

Tolstoy was always brimming with energy. He turned to learning Greek and Hebrew, studied Chinese wisdom, and tried to master riding a bicycle. As a recluse, he never lived for himself, but tirelessly petitioned on behalf of the serfs, the soldiers, the homeless. At the outbreak of famine in Central Russia in 1891 he raised money for relief.

Tolstoy’s estate in Yasnaya Polyana attracted flocks of the poor and needy, who would put their trust in the benevolent landowner. He gradually evolved into something of a moral paragon and a symbol of honesty and grace, his acclaim equaling that of Gandhi and, later, Martin Luther King.

Going on sixty, Tolstoy experienced a shattering crisis of faith that afflicted both his moral and intellectual beliefs. Tolstoy was plagued by a severe disappointment in literature, civilization and humankind, and could no longer bear the burden. Moreover, his mind was turning to suicide. The harmony was absent from that world of sorrow, the powerful oppressed the weak, and people wasted their lives on empty pursuits. It was with a heavy heart that he looked at the world surrounding him. But he would not avert his eyes.

It was this  internal conflict that was to give rise to the so-called Tolstoyan movement. Tolstoy turned to preaching asceticism and non-violent resistance to evil - the cornerstones of his new religion. This new agenda was simple: One should give away one’s riches, reach out, suffer privations, and live a life of austerity. Despite his beliefs, however, Tolstoy himself had not given away his riches, neither had he abandoned his estate. He acutely felt the contradiction inherent in his position and suffered greatly from the knowledge.

After the revolution of 1905 the country was engulfed by terror. Thousands of people who upheld their beliefs were marched off to jails, exile, and hard labor, but Tolstoy remained immune to repressions.

He wrote to the Tsar's ministers, claiming to be the root of evil and thus assuming the responsibility pinned on those influenced by his own banned writings. Tolstoy wanted to experience the suffering. His personal security preyed on his mind. “Nothing would satisfy and rejoice me more,” he wrote, “than being thrown into jail, a good true jail, filthy, cold and starving. That would have filled my old age with true joy and satisfaction.” But he stood too high and out of reach.

A desire to break free

He considered his family insane, and they responded in kind, with Sophia wanting him to take him away to a spa for a period of convalescence after his nervous breakdown. Though she loved him dearly, she could not understand his stance. Why would a man seek to reject the money, the land, his literary property rights? When he sought to break away, she responded by threatening suicide, and later nearly threw herself under a train in the manner of Anna Karenina, though fortunately she was talked out of it. Then she declared that she would have her husband taken into legal custody if he began to give away their property. He was to be packed off to an asylum and the property would remain in the family.

Yet in the end he did break free, slipping away from his family one winter’s night. He left a letter to his wife, explaining that he could no longer endure the life of luxury and wished nothing more than to spend the last days of his life in solitude and quiet.

He boarded a train, but during the journey he came down with pneumonia . At the small station of Astapovo, his condition suddenly worsened and he was obliged to descend from the train and seek help from the station master. Tolstoy spent his last hours grappling with a moral problem. “And what about peasants, how do they meet death?” he asked himself, “What if I also die unabsolved …” Moments before death, looking straight ahead, he said: “I cannot see my way!” And his final words were: “There are millions of people in the world. Why are you so anxious about Leo?”

Visiting a Russian event at LBF? Share your images with hashtag #LBFRussia!