Future legends of Russian literature at the London Book Fair 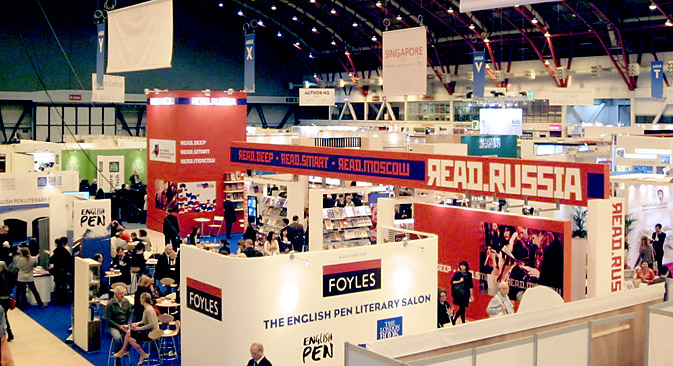 Several of the Russian authors visiting London this year spoke about the inspiration of their cultural heritage. Source: Phoebe Taplin

From rebels in ripped jeans to genteel experts on Tolstoy, this year’s crop of Russian writers in London appeals to a broad and diverse audience. Visitors of the London Book Fair talked to RBTH about their love for Russian literature.

The huge arch of Earls Court Exhibition Centre curves over the myriad stands of London’s epic-sized 2014 Book Fair. Every April, more than 25,000 book-related professionals throng here from around the world. This year, a parallel programme of events marks the Russia-UK Year of Culture.

The UK audience for Russian writers, invited here to participate in Read Russia program, are a diverse bunch. Fergus Egan, soon to start a philosophy degree at Cambridge University, admits to being “trapped in Tolstoy and Gogol.” He recently read Tolstoy’s “Confession” in different translations, including the version, published late last year, which former Penguin editor-in-chief Peter Carson completed shortly before his death. “What he says about faith is really interesting.” Egan explained enthusiastically about “his belief in the common man’s ability to have an insight into theology.”

Visitor Robert Corfe searches for Russian films “of stories by Tolstoy, Pushkin and Dostoevsky.” His personal favorite among the Russian classics is Ivan Goncharov’s “Oblomov” (due out this month in a new, award-winning translation from Alma Classics): “I think it’s very funny. His description of the major characters is just wonderful.” As for contemporary fiction, he feels “people are much more open to reading Russian literature today in the post-Soviet era.”

Children’s books, which recall her St. Petersburg childhood, are still favorites for Jane Bugaeva, who is visiting London from North Carolina. She easily quotes from Grigory Oster’s comic poetry for children. The poems use reverse psychology, suggesting that kids should cycle along the corridors, “crash into your dad” or run away into the freezing woods and be eaten by a bear.

Silvana Gonçalves from Brazil has no preconceptions about the writers she has come to hear at Waterstones bookshop. “I came just out of curiosity because I’d never read any Russian authors before,” she said. “Except Dr. Zhivago,” she added, “but everyone’s read that.”

Inspired by the classics

Translator Melanie Moore recommends Lyudmila Ulitskaya’s “The Big Green Tent,” set in Soviet-era Moscow and due out in English in December. “It’s a novel in the great Russian tradition,” said Moore. “It has a lot of characters; you really get to know them and then you’re gutted when things happen to them.” Moore recently translated “The Little Man” by young author Liza Alexandrova-Zorina, published in English earlier this year. She describes it as: “Very Russian with riffs on themes from ‘Crime and Punishment’.”

Has author Helen Dunmore, who spoke during the program, been influenced by Russian literature? “The simple answer is yes,” she told RBTH, “very much, especially by the Silver Age poets like Osip Mandelstam and Anna Akhmatova, but also Turgenev and Tolstoy and a whole range of writers have been a very strong influence on me.” Dunmore’s award-winning 2001 novel, “The Siege,” imagined a winter in Leningrad during the three-year siege.

Several of the Russian authors visiting London this year spoke about the inspiration of their cultural heritage. Cult novelist and Big Book Prize winner Eugene Vodolazkin has spent so long researching medieval folklore that “I felt as though ancient Russia became part of my life.”

Russian Ambassador to the UK holding a speech at READ RUSSIA stand at the London Book Fair. Source: Courtesy of Yelstin Centre

Alexander Terekhov’s complex, historical mystery “The Stone Bridge,” finally out in English, is crammed with allusions all kinds, including references to Chekhov. Irina Muravyova explains how her novel “Day of the Angel,” published in translation last year, was influenced by Tolstoy: “Who, if not he, realized the tragedy of life … but who gave us more joy, more laughter or more sense of life?”

Often seen as Tolstoy’s heir, rabble-rouser Zakhar Prilepin has attracted a crowd. He summarized his life for the London audience: “I am 38. I have written ten books. I also work in political journalism and as a political activist.” He has been a security guard, military captain in Chechnya, and leader of a banned radical political party.

Prilepin shared the bookshop stage with Vodolazkin. Elizabeth Kaplunov, who has lived in London for twelve years, remarked: “The writers are interesting because of the worlds, the sides of Russia that they represent. Vodolazkin is about the more traditional and academic old values, whereas Prilepin is more controversial, more vibrant, a rebel. Both of those sides are interestingly combined in today’s Russia.”

Her favorite author is Victor Pelevin: “another writer who represents the modern Russia novel, for me … he is a philosopher and a caricaturist of modern life.”

His latest book in English, out soon, is “Sankya”, a tale of young revolutionaries, originally written in 2006, with clear autobiographical elements. What proportion of “Sankya” is fiction? “62 percent autobiography, 38 percent fiction,” he said jokingly. “Literature is more than truth. It is an absolute concentration of life.”

“Prilepin is a very unusual writer,” said Arina Krapivina, venue manager at Pushkin House. “He’s someone who has an opinion about everything.”

Personally, Krapivina said she is a bigger fan of Vodolazkin’s novels, particularly his latest, “Laurus” (due out in English in December) which she rates as “the best book of 2013: It is fiction, but it has such an interesting historical background … You exist in the world he creates and go on a fascinating journey with the main character. It takes place in a fantasy version of Russia, but it represents anywhere in the world. It is about our daily life.”

“When we talk about history, we are actually talking about the current age,” Vodolazkin told the audience in Waterstones. “A true literary work does not relate directly to such concepts as space and time, but takes the viewpoint of eternity.”

Did you visit a Russian event at LBF? Share your images with hashtag #LBFRussia!