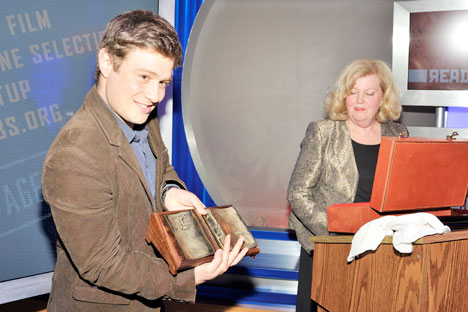 Last weekend saw the conclusion of this year’s Book Expo America. This year, the Russian stand presented a host of new book titles and authors, and hosted the award ceremony of the Read Russia English Translation Prize. RBTH asked publishers and translators to share their impressions of Russia’s participation at BEA.

The standing of Russian literature abroad has received more quality support by this year’s Book Expo America international book fair in New York, which drew to a close last weekend. Almost 1,000 exhibitors took part in the event, which is the largest annual book trade fair in the United States, including over 50 Russian publishers. Russian literature was represented at Book Expo America by the Read Russia project, Boris Yeltsin Presidential Center and Moscow Institute for Literary Translation, with the country’s stand also organizing a a translation roundtables.

“Russia is featured in American newspapers almost everyday, which arouses more interest in the country and its literature as well,” he said.

Among the events organized during the fair, the most notable was the presentation of the Read Russia English Translation Prize, awarded for the best translation of Russian literature in English published in the past year.

Translation as a new trend

“We had to review about twenty books for the prize,” said Ronald Meyer, translator and member of the Read Russia Prize jury. “It was a very strong pool of excellent translations and it was hard for us to make a decision regarding the winner. Translation of books is currently seeing a boom worldwide. There are not only Russian [authors]; we see much more books from Poland, Czech Republic than 10-15 years ago, and the Translation Market pavilion at the Book Expo America is an indicator of that trend.”

Peter Kaufman also acknowledged that the prize helps to draw attention to Russian literature in general: “It is wonderful that a spotlight is being shown on the many other faces of Russian literature - unsung writers like Sigizmund Krzhizhanovsky, Alexander Sharov and Varlam Shalamov; classic authors who may be rediscovered like Saltykov-Shchedrin and Leskov; works that will benefit from the attention of new translators - Bunin, Babel, Platonov… it's a bottomless mine of glittering emeralds and aquamarines!”

Kaufman also told RBTH that it was “a joy to see a growing number of translators and publishers taking new risks and challenges to bring this literature to the attention of more world readers. We hope we can support them all somehow!”

During also noted that Americans who are interested in Russian literature have different backgrounds: “All kinds of people ask us about new Russian books: most urban people, educated, and not necessarily Russophiles. But the majority of Americans are much better familiar with Russian classic literature than with works by contemporary Russian writers,” he said.

This statement was echoed by the people who encounter American book-lovers firsthand. “Americans know Dostoevsky, Tolstoy, but they do not know contemporary Russian writers,” said Claire Santoro, a librarian of Bergen County Cooperative Library System, New Jersey. “That is why it is important for Russia to be represented at such events as Book Expo America.”

Valentina Libina of New York Public Library added that “almost all Russian literature in our library is in Russian, a decision biased towards Russian-speaking readers, and there are very few fresh books translated from Russian. That is why Americans have little knowledge of contemporary Russian writers, and that is why translations become so important these days.”

Paving the path for foreign readers

This year at Book Expo America, the Moscow Institute of Translation, which supports publishing of Russian literature abroad, has held presentations at the Translation Market pavilion.

Maria Skachkova, coordinator of grant programs at the Institute, said that Russian literature constantly draws attention: “The question we got asked the most by American readers who come to the Book Expo America this year is ‘where to buy new books by contemporary Russian writers?’” said Skachkova.

“Also, the publishers are always interested in our grant program and seek direct contacts to Russian publishing houses,” she continued. “Many publishers do their own research, looking through the shortlists of Russian literary prizes, and sometimes they find astonishing authors and books forgotten in Russia, but interesting for a foreign audience,” Skachkova added.

“In the last two years, we have sponsored translation of approximately 25 Russian books into English and over 50 books into other languages,” says Vitaly Yefimov, project manager at the Institute of Translation. “Mostly, those are translations of contemporary writers.”

This year will see more events promoting Russian literature abroad. Russia is to take part in major book fairs in Hong Kong, Shanghai and Frankfurt. Also, this September in Moscow, the Institute of Translation hosts the 3rd International Congress of Literary Translation, at which the Read Russia Translation Prize (for translations of Russian literature into all languages, including English) will be awarded.