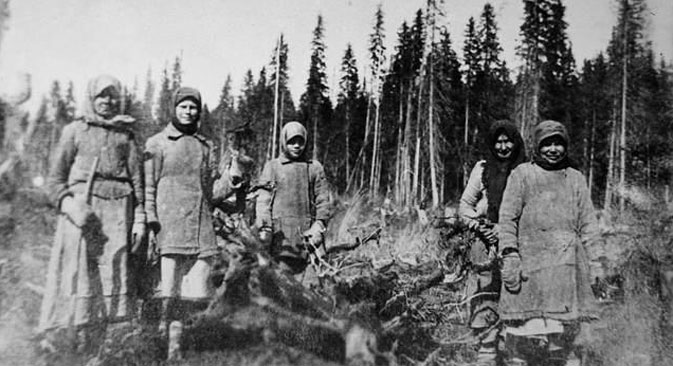 Hunger, physical punishment and sexual harrasment - and that's only the beginning of the suffering for women in the GULAG. Source: Getty Images / Fotobank

Alexander Solzhenitsyn’s “Gulag Archipelago” and Varlam Shalamov’s “Kolyma Tales” are among the most famous narratives of the GULAG survivors. Memoirs by women prisoners are generally less well known, but they give readers a new and unforgettable glimpse into a terrifying historical era.

Accounts of life in the labor camps across the Soviet Union encompass rape and prostitution, dead babies and brutal interrogations. But besides the many horrors, there are also surprising and inspiring tales of love and friendship, resilience and resourcefulness. These extremes are shown in vivid and unforgettable detail in books written by women who survived the labor camps.

“The bloodiest page of our history”

GULAG was originally an acronym meaning Main Camp Administration, but it has come to signify the whole system of imprisonment and forced labor that Stalin expanded in 1929 and which grew until his death in 1953. Anne Applebaum, in her comprehensive book “GULAG: A History”, estimates that between these dates “some 18 million people passed through this massive system,” with millions more compelled to migrate. Conditions were terrible; the death rate was high. But “in the end,” writes Applebaum, “statistics can never fully describe what happened.” We can only begin to comprehend the suffering behind the numbers by reading the eyewitness accounts of survivors.

Russian woman Tamara Petkevich spent seven years in labor camps. In her autobiographical “Memoir of a Gulag Actress” she mentions a former NKVD (security services) official who ended up in prison. “The bloodiest page of our history had firmly projected itself onto the aggravated consciousness of this functionary,” writes Petkevich. He wanders about muttering deranged decrees for shootings, exile or the arrest of “all the women of Moscow” and finally runs amok with an ax, hacking off limbs as “streams of blood gushed everywhere.” A female doctor eventually stops him by asking in a commanding voice: “Where’s the verdict? When did the court confer?” This crazy episode functions as a microcosmic metaphor for a senseless era.

Eugenia Ginzburg, a professor in Kazan, was to spend 18 years in the Soviet prison camp system. Her memoir, “Into the Whirlwind,” describes the mundane details that underline the horror, like washing her bra over the slop bucket, or darning it with fishbone needles “extracted from the evening stew.”

In parentheses, as though it were nothing remarkable, she writes about the moment when a peaceful, easy­going woman called Nadya collapses on the frozen ground, one “purple evening in Kolyma” in arctic Siberia. The guard prods her body with his rifle and shouts at her to get up until one of the other prisoners points out that she is dead. 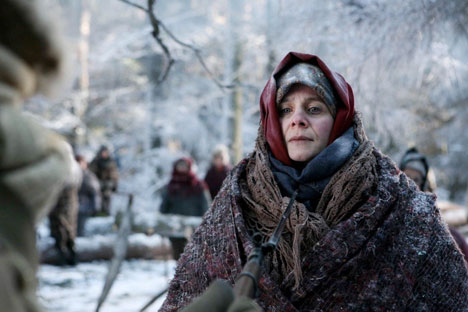 A screenshot from German filming of 'Into the Whirlwind.' Source: kinopoisk.ru

Crushed by the dreary life in labor camps, some women found ways to exchange sexual favors with the camp officials for better food and living conditions. Not everyone, though, succumbed to this temptation, which led to disdain and hostility from fellow prisoners.

“His blue, frost­bitten hands with their crooked fingers stretched out towards me,” writes Ginzburg. When she is offered money for sex, she comments wryly that she has previously encountered the question of prostitution only as a social problem or a theatrical device.

The memoirists have mostly been arrested for political reasons under the infamous Article 58 of the penal code. Labeled as a “daughter of an enemy of the people,” Petkevich was arrested in her early 20s in 1943. A beautiful young woman, she was the target of frequent sexual assaults. When she fights off the head of the cultural­educational department, he growls: “You’ll rot. You’ll be groveling at my feet for help.”

Petkevich later describes how mothers were separated from their children and recalls one prisoner stripping herself naked and “cursing and swearing that she was pregnant again and that they had to let her stay.” The guards take her to the punishment block, “from where her screams reached us for a long time afterward.”

Against all the odds, some of the stories that emerge from the Gulag transcend savagery. Orlando Figes, in his moving epistolary history “Just Send Me Word,” documented the relationship between Lev and Sveta after Lev is imprisoned. She risked everything to visit him and to send him life saving necessities. Their 1,500 letters to each other are a tribute to the human spirit.

The most famous Gulag friendship is that between Ariadna Efron, daughter of the poet Marina Tsvetaeva, and Ada Federolf, whose memoirs are published together in one volume called “Unforced Labors.” Efron wrote in a letter that her relationship with Federolf had “weathered the test of ten years of living in conditions, the difficulty of which you, thankfully, can barely imagine.” Federolf describes her delight at meeting “Alya” again after a separation: “There it is, prisoners’ happiness, the happiness of simply meeting a person.”

Several memoirs describe the use of coded tapping to communicate between cells. When Ginzburg finally decodes her neighbor’s patiently repeated “g­r­e­e­t­i­n­g­s,” she can “sense his joy” through the stone slabs of the wall. For Ginzburg “there are no more fervent friendships than those made in prison.” Literature also became a lifeline. Ginzburg recites Russian poetry, composes and memorizes her own poems, asking: “What to trust / When all is lies?”

Petkevich, who became an actress, first with a theater ensemble collective, which toured the camps, and eventually in the outside world, often comments on the power of art. The story she recites becomes “more powerful than my own suffering.” At a prison camp concert, “the entire hall was sobbing ... we had forgotten what music sounded like.”

A piece of the puzzle

Earlier this year the cult UK independent publisher Persephone Books brought out a stylish new edition of Ginzburg’s “Into the Whirlwind.” For Nicola Beauman, founder of Persephone, Ginzburg’s memoir “should have a place next to other classics such as Akhmatova’s ‘Requiem’ and Nadezhda Mandelstam’s “Hope against Hope.’”

Applebaum writes about the crucial importance of understanding “the darker side of our own human nature.” Each story and memoir, she insists, “is a piece of the puzzle.” Without them, “we will wake up one day and realize that we do not know who we are.”

Read more Reviews and Round-ups in our Literature section