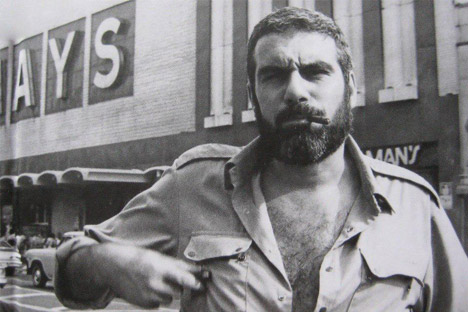 Sergei Dovlatov lived in New York from 1979-1990. In his apartment on 63rd Drive he wrote his most famous books. Source: Persoval archive

On July 9, Mayor Bill de Blasio signed legislation into law to co-name 63 streets and public places in New York. One of them will be named after the Russian-American writer Sergei Dovlatov, who lived on 63rd Drive in the Forest Hills neighborhood of Queens for 11 years, after he emigrated from the Soviet Union. It will be the first street in New York City to be named after a Russian writer.

The initiative was started by New York resident and Dovlatov fan Alex Rubin. He launched an online petition proposing to rename the street in November 2013. In less than one year, it received the 18,000 signatures required to submit the initiative to the New York City Council.

Another of his works, Zapovednik, was published in English for the first time in March 2014 as Pushkin Hills. The book was translated by the writer’s daughter Katherine Dovlatov, who spoke to RBTH about the mayor’s decision:

“My mom and I are both very excited, happy, grateful, and a little sad. We both feel that this is a great honor, especially in a country that became Sergei Dovlatov's second and last home. I also think it is fitting that it happened in New York, because it was here, in America, where my father became what he always dreamed of being - a published, working writer.

Mom and I are also very grateful to all the people who signed the petition in support of this initiative, all the news sources and individuals who had helped, and mostly Alex Rubin and Greta Rozensweig who did all the legwork, who started the petition and the website, and who liaised with city powers.”

While living in New York, Sergei Dovlatov was able to publish his works in Russian (although in limited circulation and only in U.S. and French publishing houses). Practically unknown in his homeland before perestroika, he began to become popular in Russia in the 1990s, with readers particularly responding to his sense of humor, his vivid characters, and his skill at displaying all of the curiosities of Soviet life.

In New York, he also edited “The New American," a liberal, Russian-language émigré newspaper, and was later a regular contributor to the New Yorker.

Kurt Vonnegut, an American writer, author of such iconic works as the Breakfast of Champions and Slaughterhouse Five, once wrote to Dovlatov: “Dear Sergei Dovlatov! I love you too, but you have broken my heart. I was born in this country and fearlessly served it during the war, but I still haven't managed to sell a single story of mine to The New Yorker. And now you come, and—bang!—your story is published at once…. I expect much from you and your work. You've got talent, which you are ready to give away to this mad country. We are happy you are here.” This letter is kept by Dovlatov’s widow in the apartment on the 63rd Drive.

According to Katherine Dovlatov, the street-naming ceremony itself will take place in the fall. Moving forward, Rubin and other Dovlatov fans plan to place a memorial plaque on the building where Dovlatov lived, a practice that is common in Russian cities but not in the U.S. Rubin thinks that such a plaque would be a fitting memorial to a Russian writer who was thoroughly at home in New York.