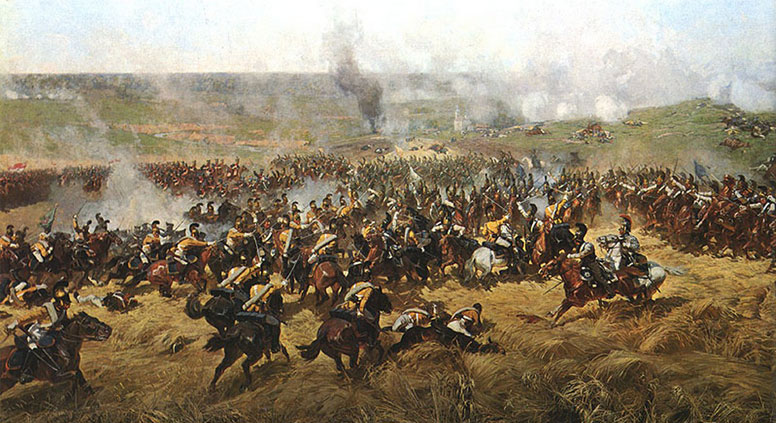 A fragment of "Battle of Borodino", panoramic painting by Franz Roubaud. This battle was famously described by Leo Tolstoy in "War and Peace". Source: Open sources

The current conflict in Ukraine is raising sensitive ethical questions, forcing us to consider the justifications and meaning of using military force, and whether it should be allowed at all. RBTH looks at what five great Russian authors had to say about war. Every quote comes from a different period in the country's history and relates to different events, but none has lost its relevance. The same range of opinion is being voiced in today’s traditional and social media in connection with the Ukrainian crisis.

"When I am told that all blame in a war lies only on one side, I can never agree with such a view. While it may be true that one of the sides acts in a worse way than the other, attempts to find out which of them is the worst will come nowhere near explaining why such a horrible, cruel and inhumane phenomenon as a war is taking place. For anyone who does not close their eyes to the truth, these reasons are obvious. There are three of them: first, unequal distribution of wealth, that is some people robbing others; second: the existence of the military class, that is people who are trained and intended for killing; and third, a false, deliberately deceptive religious teaching that young generations are forcibly brought up in." (From a letter to G.M. Volkonsky, Dec. 4, 1899)

Tolstoy, one of the main pacifists in Russian history, did not always adhere to such peace-loving views. In fact, it was military experience that changed him. Tolstoy took part in the defense of Sevastopol during the Crimean War (1853-1856) and in the military campaign in the Caucasus. Following this he came to absolutely reject any killing and, hence, to reject many existing social institutions, including the church and the state.

"In some cases, if not all (perhaps with the exception of internecine wars), a war is a process whereby with the least bloodshed, the least grief and the least effort international peace is reached and more or less normal relations between nations are developed. … Rather, it is peace – lasting peace – that turns people into animals and makes them cruel, not war. … A war for the sake of a generous-spirited goal, for the sake of liberating the oppressed, for an unselfish and sacred idea, a war like that clears the air polluted by miasmas, heals the soul, banishes shameful cowardice and laziness, imparts and clarifies the idea that this or that nation is destined to implement. A war like that strengthens each individual soul by the idea of self-sacrifice, and the soul of the whole nation by the idea of the mutual solidarity and unity of all the people comprising the nation." ("A Writer's Diary," 1876. "Does shed blood save us?")

In 1877, Russia declared war on Turkey. In addition to political causes, that war was driven by a lofty idea: in Russia, it was viewed as brotherly assistance to the peoples of Bulgaria and Serbia, who had been oppressed by the Turks. Before the war and in its first year, Dostoyevsky published "A Writer's Diary," in which he discussed at length his thoughts about the war and about European politics in general. That social and political commentary of 150 years ago is strikingly similar to modern online political analysis, with the same fervor, strength of opinion, passion for predictions and forecasts. Before Russia officially joined the war, Dostoyevsky discussed the possibility of an “undeclared war” – a war waged by volunteers. The parallel to current events in southeastern Ukraine is clear.

"I am not afraid of shrapnel. But the smell of war and all that it is associated with it is offensive. Its boorishness has haunted me since my school years, taking many shapes and forms, and is now choking me. One should not put up with the smell of a soldier's overcoat." (Diary, June 28, 1916)

At the start of the First World War, many Russians enthusiastically welcomed it. Refined literary figures went to the front or wrote sincere patriotic poems. Blok, the most prominent poet of the Russian Silver Age, stood apart in his revulsion at the war, realizing that it would inevitably lead to a social upheaval. After the 1917 revolution, he made strenuous attempts to reconcile himself to the new "boorish" reality, to see it as a healthy and cleansing new beginning. However, all those attempts only plunged him deeper into a despair that brought an early death.

"We had to elevate our modern times and fill them with spirituality so that every single day would become more precious, so that it would be a shame to lose it and be deprived of it, so that life became attractive, spiritual and filled with inspired beauty, so that there was no debilitating desire for murder or suicide. I do not know and cannot imagine any other way of resisting a war." (Letters, vol. 10)

In Soviet times, the official "Struggle for Peace" became a powerful propaganda campaign. Famous writers frequently participated in different events organized under that banner. The only way for a writer to express their thoughts about war without ostentatious grandiloquence or the required ideological arabesques was in a diary or private correspondence.

There is an echo of Tolstoy's sentiments in Pasternak’s heartfelt statements, and indeed the author’s Nobel Prize winning novel "Doctor Zhivago" has quite a lot in common with "War and Peace." He directly contrasts himself in another letter, writing, “The war had an enormous liberating effect on the whole of my wellbeing, health, ability to work, and sense of destiny." However, Pasternak himself did not fight in either the First or the Second World War. His attitude to war was guided not by experience but by emotions and his poetic temperament.

"No war is ever a way out. War is death. A war is terrible not because of advancing troops, houses on fire and bombings. A war is terrible in that it subordinates all that is thinking to the legitimate power of stupidity. … Although, to be fair, this is the way things are here even without a war." (Novel "The First Circle," 1958)

Solzhenitsyn, a serving officer who was sent to prison and then the camps straight from the frontline, unequivocally condemns a war waged by a totalitarian state, even if the war is waged against an obvious aggressor: "Any military situation only serves as a justification for tyranny inside the country, only makes it stronger."

To complete the picture, it is worth bringing to mind one more quote, albeit not belonging to a man of letters. The late tycoon Boris Berezovsky, a popular public figure at one time, once said, "It takes a lot of effort to make complete strangers go and die for your business."

The author is a writer and Russian Booker Prize winner.