A long-distance romance: Russia-born writers in the U.S. 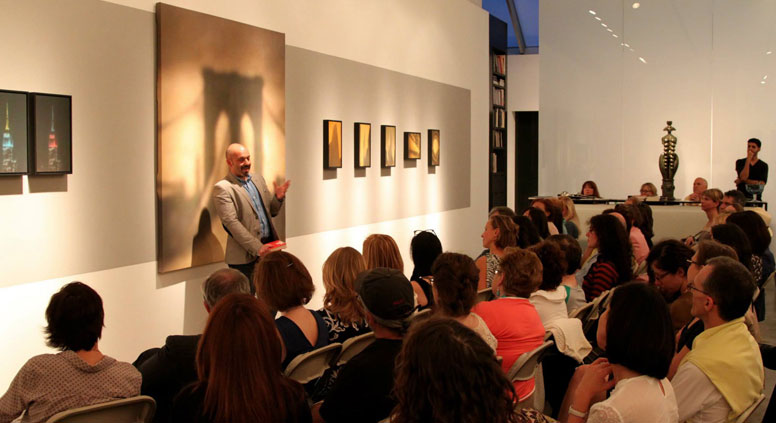 Third wave immigrant writers are now creating a veritable canon of Russian-American literature. Among them are Boris Fishman, Gary Shteyngart, Kseniya Melnik and Lara Vapnyar, who have all published critically acclaimed books this year. RBTH spoke with them about the impact being an immigrant has on their writing and identity, and how they feel about the country they (sort of) left behind.

Caught in the middle

Immigration often has a complex effect on identity, as the child – or adult – searches to understand where they truly belong, psychologically and culturally. Thanks to decades of competing ideologies, the contrasts are even starker for third wave Russian-American immigrant writers, who often describe the two countries as mirror images of each other.

As immigrants experience both cultures, they often feel a sense of not quite belonging in either country, caught as psychologically stateless ambassadors to two diametrically opposed worlds.

“I’m always a kind of an outsider – in U.S. as well as in Russia,” says Lara Vapnyar, “but then, of course, that’s good for writing, because it makes you more aware of your surroundings.”

Gary Shteyngart agrees: “Tension is good for writing, and immigrant life provides a great deal of tension. If had to choose between being a miserable genius like Dostoevsky or a happy average Joe, I’d rather be happy, but, you know, you have to work with what you’ve been given.”

Is there a pan-immigrant experience?

Fishman moved from Minsk to New York City at the age of nine and, because he picked up English with a child’s ease, he immediately became “the American,” and, therefore, in charge of handling adult responsibilities.

“I was arguing with a telephone company over 10 cents at nine years old,” he says, laughing as he reminisces about the absurd frugality of immigrant life.

Yet it was precisely one of those tasks – writing restitution documents for his Holocaust survivor grandmother – that inspired his debut novel, “A Replacement Life” (June 2014). The book centers on a young writer trying to break free of his meager Russian immigrant existence, who is pulled back into it when he’s forced to forge restitution documents for other Russian Jews. The novel explores the ethical ambiguities of these survival tactics, along with sharp cultural observations and philosophical musings.

Fishman’s attitude to Russia itself is also laced with a distinctly Russian-American ambivalence. “It’s strange because I feel very connected to Russia culturally, but simultaneously it represents everything I want to get away from. Yet there are certain sensual details, like the smell of the metro, which is just incredible,” he says, rubbing his fingers together as people often do when they remember an indescribable scent.

Gary Shteyngart confesses his olfactory nostalgia as well. “Everybody always talks about the metro! But it’s true – that smell of burning rubber and electricity, it’s like nothing else.”

Shteyngart, who published his first novel, “The Russian Debutante's Handbook,” to enormous accolades in 2002, opened the door for other Russian-American writers to produce mainstream literature. This year has seen the publication of his work “Little Failure,” which is a memoir of growing up as a Russian immigrant in 1980s Brooklyn.

The book’s poignant humor and heartbreaking accuracy have struck a chord with many readers. Shteyngart is surprised at the intensity with which immigrants have related to the novel. “It makes me think there’s some sort of pan-immigrant experience,” he says.

“People especially identified with the pressure from their parents to succeed, and the sense you could never really live up to their expectations. One woman even wanted me to sign her copy of the book, ‘From one Little Failure to another.’”

Unlike Shteyngart and Fishman, Kseniya Melnik moved to the U.S. as a teenager, which she believes spared her from the identity crisis or social stigma experienced by many who emigrated there as children.

“I moved from Magadan [a remote region in Eastern Siberia], where I was born, to Alaska at the age of 15, so by the time I got to college in upstate New York, people almost lumped the two places together and thought it was cool to have such an exotic heritage.”

Instead of navigating issues of identity, Melnik’s debut short story collection, “Snow in May”(May 2014), captures the extraordinary poetry of everyday life in the country she left behind. Unsurprisingly, many of her pieces are set in the Soviet era – a society where there were so few material goods that objects we take for granted, like a crate of bananas or an imported silk dress, become infused with poetic significance.

Melnik is also a testament to the way that fiction is often born from a longing for something that is at once familiar and no longer tangible, from a gap between memory and so-called reality that imagination must fill.

Like Melnik, Lara Vapnyar’s Russia is often a fusion of autobiographical fact and lyric fantasy. Her recent novel, “The Smell of Pine”(May 2014), is about a woman in the grip of a mid-life crisis, remembering her sexual awakening as a young camp counselor one Soviet summer.

Vapnyar was inspired to write the book when her 16-year-old daughter gave her a quiz from her sexual education class, and she realized that the total lack of sexual schooling in the Soviet Union had left her ill-equipped to answer even basic adolescent questions.

“We just didn’t know anything back then,” says Vapnyar, who emigrated from Russia to New York as a married woman at the age of 23, “and this book was particularly difficult to write because even though I invented the characters and plot, I wanted to be really accurate in portraying how we approached sex back in those days.”

With her distinctly droll humor and sharp psychological insight, Vapnyar explores the depths of the human psyche while also recapturing the sensual vitality of life’s first thrills.

“I’m naturally drawn to writing about the Soviet Union because I spent my formative years there. All of those initial sensations of youth somehow shine the brightest and have the most emotional weight.”

Like Fishman and Shteyngart, Melnik and Vapnyar distance themselves from Russia politically, but feel a rush of tenderness for certain poetic details. For Melnik, one of those joys is looking at “multi-colored khrushchoyvka [Krushchev-era] apartments on a wintry night.” For Vapnyar, it is the “smell of zemlyanika [wild strawberries] in the forest, when the grass is soft, and they’ve warmed from the sun, and before you even bend over you can already sense their fresh aroma.”

So it would seem that today’s new generation of Russian-American writers will continue in the great tradition begun by Nabokov: using literature as a haven for their own unique, personal Russias, which politics can never tarnish or take away.

Vica Miller Literary Salons, held bimonthly at galleries around New York City, retain a certain Old World elegance. Miller, a native of St. Petersburg, moved to New York as an adult and wanted to create an atmosphere recapturing her hometown’s “Golden Age of poetry.” Each salon consists of four authors and a theme – the upcoming ones are Love and Fiction. In May 2014, Lara Vapnyar and Boris Fishman attended the Russia-themed salon to read from their new novels. The salon also featured Vica Miller herself reading from her recently published book “Inga’s Zigzags.”

Each short reading is usually followed by a Q&A session. This is very important to Vica because it enables the audience to “break down the barriers of cynicism and ask genuine, personal questions.”
Vica began the salons in 2009, inspired by the idea of creating a space where lovers of both literature and art could happily mingle. In addition to cultivating friendships, the salons have already produced some success stories, with unpublished authors finding agents and signing book deals.