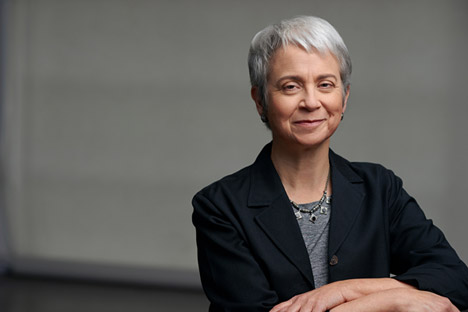 Award-winning translator Marian Schwartz talks to Russia Beyond the Headlines about her mission to bring Russian literature to more readers.

Marian Schwartz, who has been translating Russian literature since 1978, won the 2014 Read Russia award for Contemporary Literature on September 6. Her English translation of Leonid Yuzefovich's “Harlequin's Costume” recreates the different voices in this postmodern whodunit to great effect.

The novel is the first in a trilogy, based on the real-life adventures of Ivan Putilin, a legend in his own lifetime. In the late 19th century Putilin was a chief inspector of police, chasing St. Petersburg’s most notorious criminals. Later contemporaries dubbed him a Russian Sherlock Holmes, but in Yuzefovich’s hands, Putilin’s stories become something richer and more multi-layered than traditional murder mysteries. “Harlequin's Costume” originally appeared in Russian in 2001, and its sequel, “Prince of the Wind,” won the National Bestseller literary prize.

Schwartz herself has won many previous prizes, including the 2011 Heldt Prize for her translation of Olga Slavnikova’s extraordinary novel “2017.” But this latest award is particularly welcome because “Harlequin’s Costume” was a novel she decided to translate on her own.

Tales of the 'Russian Sherlock Holmes': More than a detective story

“Having translated about 70 books over the last 35-plus years, fewer than five of them, probably, have been at my initiative,” she told the Moscow audience for the Read Russia Award Presentations. “I found, appreciated, and translated 'Harlequin's Costume' on spec, convinced that it would find a publisher eventually.”

In the end, the book was finished only with help from a grant, and it was several years before Glagoslav published it in 2013. “My hope is that this prize will help in finding a publisher for all of Yuzefovich's books,” says Schwartz, describing him as “one of the most overlooked authors in English translation.”  She is also translating and seeking a publisher for Yuzefovich’s more recent, more serious novel “Cranes and Pygmies,” which won the Big Book award in 2009.

The Putilin mysteries appealed partly because they were “so unlike most Russian books people had in America.” “After the break-up of the Soviet Union, I spent a long time looking for the strong Russian voices we hadn't heard in the West,” Schwartz told RBTH. “It was time, in my opinion, to broaden the West's view of Russian literature.”

“I became a translator,” she says, “largely because I felt that was the one role - bringing Russian literature to the English-speaking audience - I could play best. It was something a native speaker of Russian could not do.” Schwartz first studied Russian at Harvard and at Leningrad State University, and later at the University of Texas. “I was already fluent in French,” she said, “and had ambitions to learn many languages, so Russian was just the next one on my list. I'd read a lot of Chekhov in high school, especially the plays, but once I got to college, the literature got its hooks into me and never really let go.”

Schwartz worked as a translator for Nina Berberova, the émigré novelist and short story writer, who was born in St. Petersburg in 1901. The partnership lasted from 1981 until Berberova’s death in 1993. “I've always felt that that collaboration was definitive for me,” says Schwartz.

There have been plenty of challenges during Schwartz’s celebrated career so far, but she says: “The most difficult by far was 'Vekhi' (Landmarks), which was in fact the first book I ever translated and published, in 1978.” “Landmarks” was an early 20th century collection of philosophical essays and, since then, she has translated books about history, art and food, as well as fiction. Other more recent daunting prospects included Mikhail Shishkin's dense and intricate novel “Maidenhair” and Tolstoy's “Anna Karenina”, which is due out in November from Yale University Press.

“'Maidenhair' was fundamentally complex,” says Schwartz, “but I felt a great affinity for Shishkin's style, so the end result was extremely satisfying.” The challenge of retranslating a classic like “Anna Karenina” is inherently daunting “for obvious reasons”, but Schwartz felt strongly when she took the project up that “there were aspects of the book related to style that had not been correctly addressed in previous English translations.”

The main problem in translating “Harlequin's Costume” was to show how it meshed with “the Anglo-French tradition of detective novels while maintaining the intense Russian flavor,” especially “given that I was contemplating a more general reader.”

The intended readership is central to Schwartz’s perception of her role. She told RBTH last year that she would “dearly love to see more … translated books that would appeal to a broader audience.” Apart from Yuzefovich, the authors she wants to translate more of in future include Andrei Gelasimov, whose comic, poignant, accessible novels she has almost single-handedly brought to the attention of Anglophone readers. She also has her eye on Olga Slavnikova's novel “The Man Who Couldn't Die (Bessmertny)” and Dina Rubina's novel “The Petrushka Syndrome.”

“What all these books have in common, apart from their literary brilliance,” says Schwartz, “is what I see as their potential appeal to the Western reader. These are books I'd like to share with the American audience.”