Gastronomic Goodwill: Beyond borsch and vodka 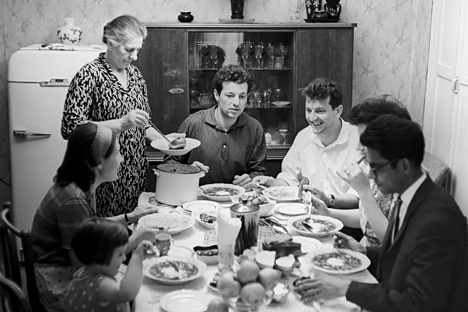 A family having dinner in Moscow, 1966. Source: Selimkhanov / RIA Novosti

For many foreign guests to Russia, the national cuisine reveals treasures and curiosities that extend far beyond its best-known delicacies. From dumplings and currant juice to raisin bread with mackerel and tea 10 times a day, a survey of writings from travelers from different eras reveal how a gastronomic journey across Russia can inspire anybody.

“Classic Russian cuisine is virtually unknown in the United States, apart from vodka and caviar, those enduring ambassadors of goodwill,” Anne Volokh states in the beginning of her famous cookbook, The Art of Russian Cuisine, first published in 1989. Volokh’s solution to this culinary dilemma is to make her recipes as approachable as possible, while also introducing readers to classic dishes that may scare off first-time Russian cooks, such as Herring Under a Fur Coat—a layered salad with herring, beets, potatoes, and carrots.

Russians are often shocked by how little Americans know about Russian national cuisine. Americans tend to envision Russian tables covered in borsch, caviar and vodka. And it’s true: when it comes to offering food to visiting foreigners, Russians often return to their roots and reach for some beets to make soup, for the vodka to make a toast. But foreigners who are willing to dive into Russian cupboards, inevitably find a complex set of ingredients for soups, salads, grilled meats and marinated vegetables.

The taste of Russian hospitality

From George Kennan, who in 1868 wrote from snow-bound camps in the Far East where he survived on reindeer, tea, and the hospitality of his native hosts, to John Steinbeck, who traveled to Russia in 1947 with photographer Robert Capa, foreign visitors to Russia were especially curious about “daily bread.” “It occurred to us that there were some things that nobody wrote about Russia, and they were the things that interested us most of all,” Steinbeck wrote. “What do they serve at dinner? ...What food is there?”

More recently American Ian Frazier and British writer Colin Thubron have written books with similar titles (Travels in Siberia (2010) and In Siberia (1999), respectively) that explore post-Soviet Russia from train cars and cross-country road trips, adding to the canon of Russian travel memoirs. Although centuries and decades and shifting government regimes separate these authors’ experiences, their encounters with Russian hospitality and the food offered to them changes little.

In these travelogues, readers will find several irrefutable, recurring facts: Russians are some of the most hospitable hosts, and in their enthusiasm, will often accidentally encourage guests to eat more than is comfortable. In describing three meals in less than a twenty-four-hour period where the dishes on the table often numbered in the tens or twenties, Steinbeck writes, “We ate far too much. We ate the little cherry cakes and honey until our eyes popped.”

Thubron’s travels take him into the company of a family of Old Believers. “All day they lavished meals on me: dumplings, beef stew, currant juice and fresh raspberry jam.” Frazier, whose book outlines five separate trips to Russia over a 12-year span, could not speak Russian well, but quickly fell head-over-heels for the culture and people. In an effort to mirror the generosity shown to him as a visitor, Frazier writes, “I ate delicious fried fish and drank icy-cold vodka, trying to project mute goodwill and gratitude.”

Another agreed upon conclusion by western authors is that Russian food is an eclectic mix of ingredients, which Volokh contributes to a “unique result of climate, geography, and native genius.” The knack Russians have for combining ingredients is often odd but pleasing to visitors. Kennan, who traveled to Russia on an expedition for a telegraph company, responded positively to the new dishes he faced: “A curious native dish of sour milk, baked curds, and sweet cream, covered with powdered sugar and cinnamon, is worthy of being placed upon a civilized table. It will thus be seen that life in a Kamtchatkan [sic] settlement, gastronomically considered, is not altogether so disagreeable as we have been led to believe.”

Frazier, however, had a harder time coming to terms with the “native genius” cooking style. On his cross-country trip, Frazier’s guide made him a lunch of “freshly baked black raisin bread on top of which he put chunks of canned mackerel dripping with oil and garnished with peeled cloves of garlic cut in half...my stomach hesitated. I ate it all, however, and then washed it down with tinny-tasting canned orange juice from Georgia—in retrospect, another mistake.” Frazier, it should be noted, was the only author that included five entries in his index for food poisoning.

Cuisine for a big country

Native genius is also necessary for preparing food on a train. Many travelogues treat Russian railroad cuisine as a sub-category unto itself. Thubron writes, “I knew these trains by heart…I too now softened dried noodles with scalding water from the carriage boiler, brewed up cheap coffee and picked at salted omul [a type of fish] as the train and the hours crawled on.” On a 61-hour trip to Yakutsk, Frazier comments on the repetitive eating of non-perishable goods, like dried meat, cookies and tea. “But after a while our supplies began to run low,” he writes, “and the packages they came in, brought out for the fourth or fifth reprise, looked less appetizing.”

A region’s cuisine becomes distinct as the population comes to terms with the available resources. When European settlers came to America, they had to learn to cook with maize, a grain that would come to be a cornerstone in their culinary repertoire, especially their liquor. For Russians, ingredients that are now essential to their national cuisine slowly made their way, by force and by trade, into the Russian diet. Smoked fish from the north, tea from the east, buckwheat from the south, potatoes from the west – Russian cuisine is a mirror of the country’s vast geography. Volokh also comments on the extraordinarily large number of fish and mushroom dishes, due to the church’s prohibition of meat for about 250 fasting days per year. These are the outside forces that shape Russian recipes.

Other diet-altering events include the Great Patriotic War, as Russians call World War II. In this instance especially, Russians were required to survive off ingenuity and desperation. Steinbeck, who traveled around western Russia only several years after the war ended, writes, “Breakfast consisted of tomato salad, pickles, watermelon, and cream soda. But it was not an insanity; it was just a normal Stalingrad breakfast. We did manage to get the cream soda changed to tea.”

Another irrefutable fact is this: traveling to Russia will increase your tea consumption by at least 400 percent. Kennan, who spent most of his trip in Kamchatka and was often snowbound, writes: “I managed to pass away the day by drinking tea eight or 10 times simply as an amusement.” Volokh calls this steeped brew Russia’s “national non-alcoholic drink.” In their respective books, Kennan mentions tea-drinking 55 times, Frazier 40 times, Steinbeck 18, and Thubron 14 times.

As hard as visitors may find it to turn away a tumbler of vodka, a glass of tea is impossible to refuse. Tea is served for warmth, conviviality, and medicine. Several glasses must be drunk at every sitting. When driving around Lake Baikal, Frazier writes, “We stopped for lunch and ate our kielbasa [sausages], bread, and hot, sugared tea off the... bumper. In the wind the food tasted delicious, seasoned with cold and engine exhaust.” At another stop, the author notes that, “The tea was served in steel cups which the Russians held bare-handed without comment and which we Americans could pick up only by wrapping our hands inside our jacket sleeves.”

Frazier, along with Kennan, Steinbeck, and Thubron, is open in his regard for Russians and their culinary customs. Despite gastronomic differences, these authors are in awe of the hospitality and kitchen creativity of their Russian hosts and travel companions. John Reed, author of Ten Days that Shook the World, an American journalist and socialist who witnessed the 1917 October Revolution, wrote about his first trip to Russia: “Russian ideas are the most exhilarating…Russian food and drink are to me the best, and Russians themselves are, perhaps, the most interesting human beings that exist.”