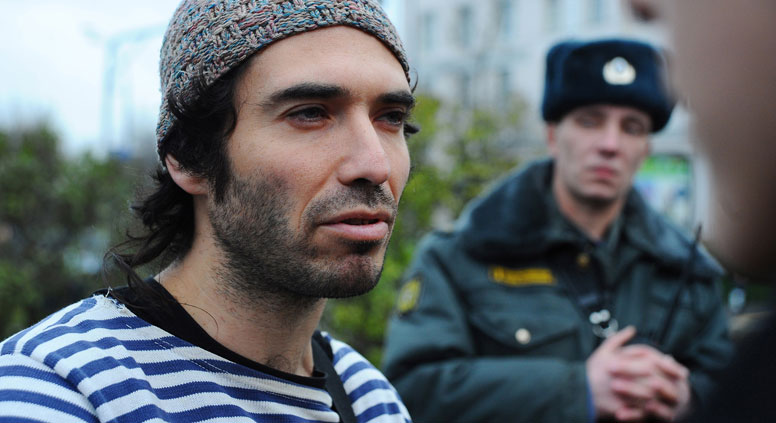 Poet Kirill Medvedev at a rally for the support of politically persecuted anti-fascist activists in St. Petersburg, 2012. Source: PhotoXpress

Since the collapse of the USSR, Russia has seen the publication of various kinds of political poetry: from cutting satires to unsophisticated rants against the status quo. Some poets have turned their focus outwards, writing about world events, while others have steadfastly criticized – or praised – the Russian government itself.

There was an explosion in Russian social poetry following the fall of the Soviet Union. The turbulent political climate and the almost total disappearance of censorship led to poems appearing on the television as well as the internet. In a development that would have been unheard-of just a few years earlier, both professional and amateur poets began making strong political statements.

During Boris Yelstin’s presidency and the early Putin years, ordinary citizens were far removed from the political process, which was decided behind closed doors by an elite circle.

Many poets who had become successful during Soviet times turned to nostalgic, even passionate, poems about the Russia they believed had died during Perestroika and Yeltsin’s subsequent transition to democracy. Their protests ranged from the broad accusation that Russia had been sold to the United States to more specific conspiracy theories involving secretive global organizations. These ideas were supported by several publications, including the Moskva and Our Contemporary magazines.

Amateur poets began attacking the new government too, and the 1993 constitutional crisis was marked by the distribution of self-published books criticizing the direction the country was taking. Although such poetry gained plenty of readers from marginalized social groups, it went largely unnoticed in the mainstream and had no impact on existing power structures. The 1993 crisis itself was resolved by the army’s shelling of the White House in Moscow rather than any popular movement.

Similar poetry can be found today on special sites dedicated to free publication. One such resource is stihi.ru, which aims to bring poets and readers together and stimulate lively debate. Although the majority of the poems on such sites are stylistically unsophisticated, reading them is interesting for anyone who seeks an insight into the mentality of ordinary Russians. The country’s perceived enemies may change over time, but the overarching motifs remain the same: a rejection of the surrounding world order, and a perpetual, restless sense of social frustration. These amateur writers are very much concerned with the “eternal Russian questions” that have existed for centuries, such as “Who’s to blame?” and “How long can this go on?”

That the machines are working great

And the army’s in kick-ass shape.

But my country’s fixated on Dima Bilan.

My country breathes the scars

Extract from user writing under the name ArsPegas, who goes on to berate his readers for handing power to the government “on a plate.”

Vladimir Putin’s decision to run for a third term caused politics to spill out onto the streets for the first time in a generation, which consequently brought about an upswing in political poetry. Although Moscow’s street protests died away, polarizing events such as the Pussy Riot scandal and the ongoing Ukraine crisis have kept poetry highly politicized. The introduction of many legislative bans and the restrictions on certain freedoms since Putin returned to office have also given Russian social poetry an additional intensity.

Russia’s leading cultural journal, Novoye Literaturnoye Obozrenie (The New Literary Review), has introduced a column called “New social poetry,” where poets inspired by political and social themes are published. Such a forum brings together liberals such as Yelena Fanailova and Stanislav Lvovsky with Marxists Kirill Medvedev and Roman Osminkin. Their views may be wildly different, but they are all opposed to the government – although only Kirill Medvedev is a political activist.

Literary critic Kirill Korchagin believes that these four poets in particular are a good example of burgeoning Russian political poetry; their poems often include someone else’s speech, which guarantees equality among the various voices in the text – a technique that correlates to the European, democratic concept of the political. Their poems often look outwards to world events such as the Arab-Israeli conflict, 9/11, the Breivik massacre, and so on.

These poems often use complex poetic techniques such as postmodern montage, niche cultural references, undifferentiated quotes, and elements of prose and documentary styles. This diminishes their potential to agitate others, as it reduces their readership to a small audience who understand current poetic trends and can be flexible in their interpretation of the works.

Extract from a poem by Kirill Medvedev:

we obtained the right to have an anti-fascist protest but not a march.

I went with the human rights activist Ponomarev to sort it out at the mayor’s office. Ponomarev was very angry. I restrained him a bit.

I’ll show them what it means to let fascists have rallies, he said.

I felt that it wasn't going to end well.

turned out to be a fat, rosy-cheeked kewpie.

It is important to note that not all famous or amateur poets are necessarily anti-government. Yunna Morits, whose poems have been adapted into popular children’s songs, has been outspoken in her defense of the Russian government’s actions in Crimea, as well as her criticism of liberalism and the Bolotnaya protest movement. Her poems have a traditional form but use slightly incorrect, colloquial speech that is suffused with official rhetoric. For example, in a reference to a famous Ukrainian nationalist, she writes: “Sevastopol is not dumb enough … to allow the Bandera scum free passage into Crimea … There will be no room in Crimea/ For the victory of the fascist cross.”

Russia has a rich tradition of popular, ironic social poetry dating back to the 1980s. These poems use simple language to dissect current events in a manner that will be recognizable to fans of satirical American programs such as “The Daily Show.”

The grandfather of this genre is undoubtedly Igor Irteniev, who was a regular contributor to the satirical TV show “Itogo” that ran from 1997-2002. The show parodied the mainstream Russian news, and Irteniev would read an ironic poem about the week’s main news story in every episode. These days, Irteniev still publishes several poems a week in newspapers and on his blog. His satirical style is as cutting as ever, and the elements of protest in his works are even more obvious.

The irony of fate

Is frightening in times of change:

Russia has risen from its knees

But has reared up.

And God is watching,

As the world lies at Russia’s feet

With its face in the mud.

Dmitri Bykov, one of Russia's most famous contemporary writers, as well as a vocal journalist, has chosen a distinctive form for his poetical commentaries on current events. Although his poems are rhymed and rhythmic, they are printed in a prose layout, as if they are regular newspaper articles. Bykov’s poetry is published in Russia’s principal liberal newspaper, Novaya Gazeta.

The science fiction writer Leonid Kaganov, another satirical author, arranges his texts in the same way. Kaganov explains: “Satirical couplets – I prefer to use this term – are usually addressed to a wider audience, which is why their length and genre is generally traditional, without any complex poetic experiments and sophisticated metaphors.” This means that ironic poets are often seen as less skilled than “genuine” poets. This is a misconception, as many of these works exhibit subtle, poetic mastery.