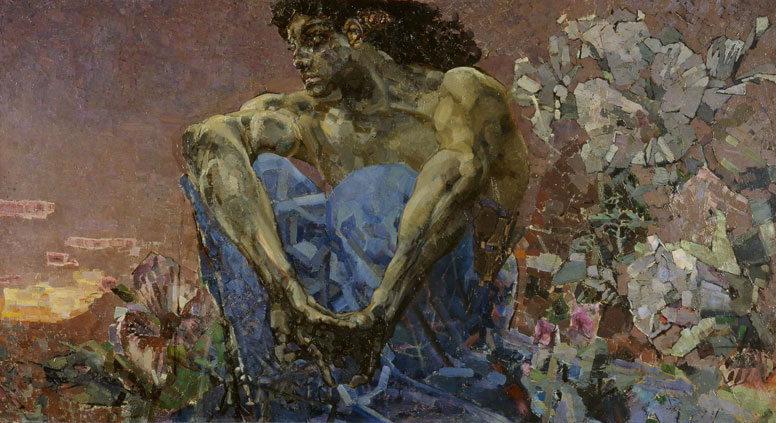 Mikhail Lermontov’s poem “Demon” was never published during his lifetime due to its excessive “diabolism.” This year, however, “Demon” was published in Moscow in 13 European languages.

“Demon” is based on the biblical myth of the fallen angel who rebelled against God – a story that has been incorporated into the work of many European poets, including John Milton, George Byron and Johann Wolfgang von Goethe. Lermontov put a new spin on this age-old tale, describing the Demon’s love for the earthly beauty Tamara. It is a love that proves deadly for her.

From Spain to Georgia

Lermontov started writing the poem when he was just 14 years old. The first version described a demon and an angel who were in love with the same nun, but the poet later modified the concept to make the demon fall in love with the nun and kill her out of hatred for her guardian angel. The work was originally set in Spain; the unwritten poetic code demanded that a romantic poem should take place in a faraway land, and the young poet was taken with Spanish motifs because he imagined he was descended from the ancient Spanish Duke of Lerma. It was only years later that he learned of his true roots in the Scottish Learmonth clan.

Lermontov had finished working on his earlier versions of “Demon” by 1834, but he did not consider the work ready for publication. He achieved a breakthrough after his first exile to the Caucasus (1837-1838) for the poem “Death of the Poet,” in which he blamed the court aristocracy for Alexander Pushkin’s death.

Just a few months of regimental service in the Caucasus had a strong influence on Lermontov. After returning to St. Petersburg, he set about rewriting the poem again, replacing his weak Spanish motifs with images of the Caucasus, adding powerful descriptions of its wild nature and Georgian feudal life. In the first “Caucasus” version, completed in 1838, the poem was widely distributed and became famous among the high society in Moscow and St. Peterbsurg.

However, Lermontov rewrote the ending to avoid censorship; in the new version, Tamara was saved by the angel instead of dying. Even the empress read the poem in this form, and it was approved by the censors in March 1839 – yet it was never published. The “diabolical” subject matter was partially to blame: in an era when the Orthodoxy was the state ideology, such a text raised too many questions. Lermontov’s character also played a part – he was a duelist and a freethinker who was out of favor with the authorities.

“Demon” went to print for the first time in 1856, but not in Russia – it was published in Karlsruhe, Germany, with a circulation of 28 copies intended primarily for members of the influential Russian Stolypin family, who were Lermontov’s relatives on his mother’s side. Perhaps due to their intercession, the poem was finally released in Russia in 1860. This was the classic version of “Demon” – the so-called sixth version, written at the end of 1838 and preserving the original ending rather than the censored one written for the empress.

Today “Demon” is recognized as a classic. In honor of the poet’s 200th birthday, the Moscow-based Rudomino Book Center under the All-Russia State Library for Foreign Literature has produced a unique publication. In addition to the original text, it also contains rhymed translations of the poem in 13 languages: English, Bulgarian, Hungarian, Greek, Spanish, Italian, Latvian, Macedonian, German, Polish, Slovenian, French, and Swedish. The publication is illustrated with the works of Mikhail Vrubel from the “Demon” series and prints of a handwritten copy of the poem.

“Lermontov’s creative work is quite well-known in Europe today,” the publisher’s executive editor Yury Fridstein said. He went on to explain: “In Britain they know him as a Russian poet with Scottish roots. In Poland and Germany they pay great attention to our literature – one should not forget that Lermontov ‘transferred’ the works of Heine and Goethe into Russian. His creative work has a certain German element. Plus, ‘Demon’ was first published in Germany.”

Lermontov is also famous in France because an enormous quantity of his poetry has been translated into French. In 2012, on the eve of the poet’s 200th birthday, the Rudomino Book Center released a three-volume collection of his writings translated into three European languages: French, English, and German. The book has a separate section dedicated to French translations of Lermontov by the great poet Marina Tsvetaeva.

“There is a special attitude towards Lermontov in Macedonia, where he is very loved and valued, and the best of the existing translations of ‘Demon’ into Macedonian was used for our book,” Fridstein said.

The story of how Lermontov’s work was translated into Spanish is interesting: it was done in the first half of the 20th century by Konstantin Brusilov, who fled Russia during the Civil War. He settled in Madrid in 1933, where he graduated from university and then taught Russian.

This is not the Rudomino Book Center’s only publication honoring the poet’s birthday. In 2014, a new publication of Lermontov’s play “Masquerade” was released, as reworked by contemporary Russian realist artist Mikhail Fedorov. “Future plans include a bilingual publication of Lermontov in Russian and Italian, which will be published with a foreword by Stefano Garzonio,” Fridstein said.