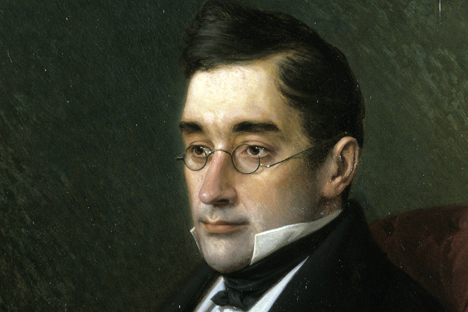 Today marks 220 years since the birth of Alexander Griboyedov, author of the great comedy “Woe from Wit.” Groundbreaking at the time for its bold use of everyday language, its influence lives on through the vast number of aphorisms it has given contemporary Russian. RBTH remembers Griboyedov's fascinating life and art.

Alexander Griboyedov was a diplomat, composer and very talented pianist, but these days he is mainly remembered as a playwright and poet. Like many poets of his day, Griboyedov died young. In 1829 he was murdered by religious fanatics in Tehran who were angry at the previous year’s peace treaty with Russia. He was just 34.

Alongside several comedies and decent poetry, Griboyedov was also an accomplished travel writer who kept memoirs of his journeys in Persia and the Caucasus. He includes some of his recollections of the Caucasus and the War of 1812 in his plays. He never actually saw combat, although he did join the Moscow Hussar Volunteer Regiment.

Griboyedov began working as a diplomat in Tehran in 1818, but Persian life was not to his liking and he moved to the capital of Georgia, Tiflis (now Tbilisi). In 1826 he was arrested on suspicion of involvement with secret revolutionary societies and the Decembrist uprising, but he was released due to lack of evidence.

In 1828, a few weeks before his death, Griboyedov married Georgian countess Nino Chavchavadze, who remained faithful to his memory for the rest of her life. She had the following words engraved onto the monument marking his grave in Tiflis: "Your mind and works are immortal in Russian memory, but why has my love outlived you?"

The famous 20th century Russian poet Vladislav Khodasevich noted that Griboyedov had been a "homo unius libri" – a writer of one book. This is true in essence, as Griboyedov’s entire global and domestic reputation rests on a single work, “Woe from Wit,” which is included in all Russian school and university curriculums.

The play is about Alexander Chatsky, a young man with progressive views who comes to Moscow after years of traveling. He heads to the home of his beloved Sophia, only to learn that she has preferred another suitor. Besides his misfortune in love, Chatsky also comes into conflict with Sophia’s father, and her father’s friends. It is a conflict between progressive views and rigid, conservative “last century” views, whose proponents are concentrated in Moscow. Starting with Griboyedov’s portrayal, the eternal contradiction between the old and the new became almost the main conflict in the whole of Russian literature.

Through several bombastic monologues, Chatsky presents himself as a kind of truth seeker, someone who unmasks people for what they really are. His ironic, biting comments cause outrage in his audience, and rumors even begin to circulate that he has lost his mind. Incidentally, Pushkin, who respected Chatsky's intellect, suggested that an intelligent person should not "cast pearls" before those who are not capable of heeding and understanding their opinion. Hence, for him, Chatsky is not rational. In the end Chatsky cannot tolerate the narrow-mindedness and even stupidity of society and leaves Moscow, vowing that he will "never go there again."

Alexander Griboyedov was one of the writers who began using living, spoken Russian, a phenomenon that only began in the 19th century. In this regard he shares a philosophy with Alexander Pushkin, who also made an enormous contribution to the creation of a modern Russian literary language. In the previous century, poets who wrote tragedies and odes for the tsars had adhered to a lofty style that did not use spoken language.

An enduring legacy of “Woe from Wit” is the huge amount of aphorisms it has given contemporary Russian. Examples include words of wisdom such as “Happy people don’t notice the time” and “The houses may be new, but the attitudes are old,” and exclamations that equate to the English “Who are they to judge?” and “I’ll never set foot in here again!” Russians may not all know the origins of these phrases, but they will certainly have heard them.

The Griboyedov Canal that runs through center of St. Petersburg past the famous Church of the Savior on Spilled Blood was named in honor of the writer. He lived in a house by the canal, which was named after Empress Catherine in his day.

The writer's surname later became a household name thanks to Mikhail Bulgakov's novel “Master and Margarita.” The building where MASSOLIT, the writers’ association, meets is called Griboyedov House in the novel.

Also common is the term griboyedovshchina, which means a society that is fixed in its views and incapable of understanding new ideas and developing spiritually.

Despite not being a prolific author in comparison with Pushkin or Tolstoy, Griboyedov is considered a treasure of Russian literature. 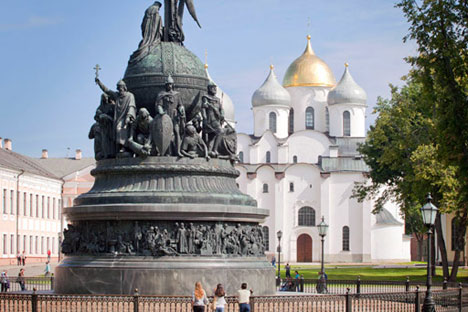 His importance as a writer was recognized back in the 19th century, and his statue was included alongside those of Lermontov, Pushkin and Gogol in the Millennium of Russia Monument that was erected in Veliky Novgorod in 1862.