Traveling through Russia: Centuries of excitement and mystery 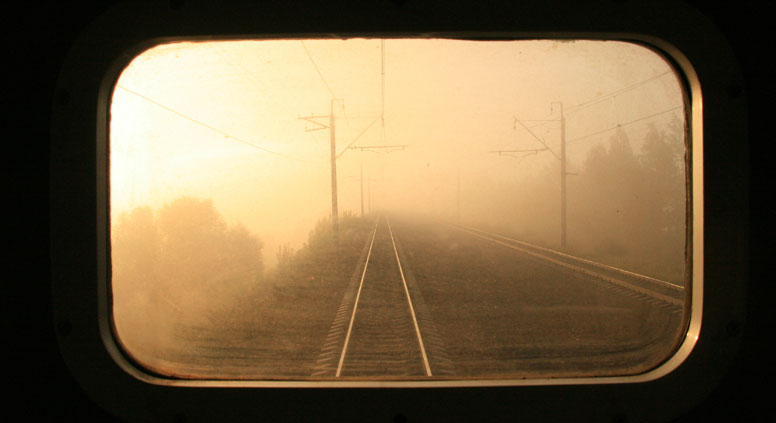 Railway rear view through the window of a train / Getty Images, Legion Media

Many foreigners have written accounts of their travels through the world’s largest country, where they have found friendship, mystery and tales of ravenous predators.

“A wild and eye-opening ride across the vast country on a train,” is how David Greene describes his Russian railway adventures in “Midnight in Siberia” (Alma, 2015). This entertaining, new contribution to the bulging library of travelogues about Russia has many of the generic features readers love: an exotic means of transport, a varied series of meals and meetings, and a steady supply of vodka.

The Romance of the Railroad: along the Trans-Siberian Railway

Greene was Moscow bureau chief for National Public Radio and now co-hosts their Morning Edition. His book revolves around the people he meets as he tries to learn more about Russia. Each chapter is named after a different character, from his wife, Rose, through Boris, Nina, Alexei, Olga and a whole series of Sergeis. “So many Russians welcomed me into their lives,” writes Greene, asserting that: “Part of understanding history and events is understanding people.”

There was a similar premise underpinning Susan Richards’ “Lost and Found in Russia” (IB Tauris, 2009), but, where Greene’s encounters are often fleeting and translated, Richards’ poignant book is based on friendships forged over a decade in Russia’s “deep heartland.” Lines like “We sat on the verandah drinking fermented camel’s milk” segue into surreal stories of monsters and UFOs, superstition and belief.

There is a similar depth and complexity in Jens Mühling’s well-written, elegantly translated “Journey into Russia” (The Armchair Traveller, 2014). The German journalist’s rich, eclectic travelogue has elemental chapter titles: Blood (Moscow), Wind (St Petersburg), Water (Siberia)… He is looking for a hermit in a remote forest. On the way he meets an eccentric mathematician, who thinks most of history is an invention, and finds a village full of vodka-hating, totem-worshipping ‘Old Believers.’

Mühling’s visit to the village of Popovka encapsulates a paradox for travel writers in Russia. As they search behind the clichés for an authentic Russian soul, these authors find another, more deeply entrenched layer of archetypal imagery that is harder to dismantle. Greene recalls laughing at his snow-fearing wife as they landed in Moscow in September 2009: “Sure … All Russians do is drink vodka, wear fur hats, and train for the Olympics?” only to find: “It was snowing.”

Platzkart stories from our readers

When Mühling meets the bearded men of Popovka, they inveigh against foreign imports: “The balalaika? An Uzbek lute. The matryoshka doll? A toy from Japan.” Their own rituals involve dressing up in wolf skins, singing Slavic songs, and visiting the birch-scented banya.

Russian steam baths feature in many of these travelogues. Bryon MacWilliams structures his whole journey around a series of banyas. In his book “With Light Steam” (Northern Illinois UP, 2014), he even takes on a culturally enlightening job as a bathhouse assistant.

This type of thematic unity provides a useful thread for some authors to knit together their experiences. From Richard Davies’ beautiful, photographic odyssey around the wooden churches of the Russian North to Oliver Bullough’s demographic investigation, retracing the erratic footsteps of Father Dmitry, in “The Last Man in Russia” (Allen Lane, 2013).

By contrast, Greene is proud of the fact that he has set out on his adventures with “a deep curiosity, and no agenda.” This is both strength and weakness. His open-minded dialogues with a variety of people across Russia reflect a diversity of views and lifestyles, but his account occasionally feels like a child’s scrapbook: collecting train tickets, noodle-wrappers and anecdotes with indiscriminate delight.

Adventures on trans-Siberian railways have provided generations of travel writers with great material. Christian Wolmar, a transport expert who is busily campaigning to be elected Mayor of London, recently wrote a comprehensive history of the railway, “To the Edge of the World” (Atlantic, 2013).

Wolmar told RBTH: “The Trans-Siberian is not only the longest railway in the world and one of the most stunning engineering feats, but it is also one of the most significant in world history … And for the traveler, it is a rail journey like no other.”

Travelling round Russia by boat, bike or bus provides other writers with new angles. Wallace Clark pieced together an account of his son’s epic circumnavigation by yacht in “Sailing Round Russia” (1999). He quotes from one of the earliest foreign visitors: Richard Chancellor, who entered Russia via the White Sea in the 16th century and visited Ivan the Terrible.

Many foreign writers set out to solve the mystery of Russia; few, if any, succeed. Greene reflects at the end of the book that Sergei Sotnikov, NPR’s Moscow producer, is “one of my closest friends in the world”, but “in some ways, he is still an enigma to me, surely as I am to him.” Mühling’s book opens with the image of a world-map jigsaw he had as a kid, where the huge, monochrome Soviet Union was the hardest part to complete. It ends with a sky, “riddled with tiny clouds … like the pieces of an unsolvable puzzle.”

Other travel books about Russia:

Thom Wheeler, “One Steppe Beyond” (Summersdale, 2011): charts a journey across Russia in a VW camper van in the late 1990s.

John Cochrane, “Pedestrian Journey through Russia” (Cambridge University Press, 2014): an account by a 19th-century Scottish explorer who walked around the world, meeting his wife in Kamchatka in the Russian Far East.