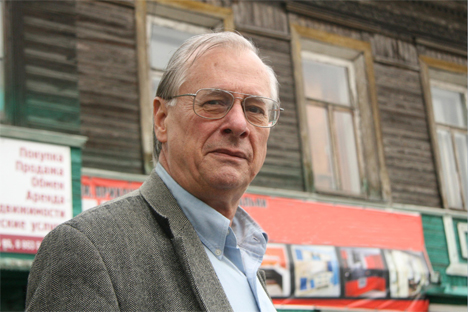 The Arctic Circle, the White Sea lonely villages spared by time – William Brumfield, professor of Slavic Studies at Tulane University in New Orleans, has spent years traveling through these most isolated regions of the Russian North photographing the beauty of traditional Russian architecture.

Brumfield's latest book, Architecture at the End of the Earth: Photographing the Russian North, contains some 200 glorious color photographs of legendary centuries-old structures and documents various aspects of Russian architecture, from log houses to grand cathedrals.

“Architecture at the End of the Earth is at once an art book, a travel guide, and a personal document about the discovery of this bleak but beautiful region of Russia that most readers will see here for the first time.”

In his photographs of onion-domed wooden churches in Varzuga, the massive walled Transfiguration Monastery on Great Solovetsky Island and the Cathedral of St. Sophia in Vologda, Brumfield outlines the region's significance to Russian history and culture. For decades Brumfield has collected material on the art of building in the Russian North, from ancient times to the end of the Soviet era.

“It is especially important to preserve the region's vulnerable achievements of master Russian carpenters,” says Brumfield, “all the more so because a number of the wooden churches also contain remarkable paintings – either icons or wall art. It is also important to remember that the architecture of the Russian North is more than just wooden buildings. Working under the most difficult conditions, skilled masons built large cathedrals and monasteries with massive stone and brick walls. The style is always boldly distinctive.”

Scholar Blair Ruble, former director of the Kennan Institute for Russian studies in Washinton, DC, writes in a review of the book, "The Russian north lies beyond the American imagination; and is imagined by Russians more than it is known. William Craft Brumfield has done more to uncover this vast and culturally rich area than nearly anyone of his generation either American or, for that matter, Russian. Brumfield reveals a region of vast cultural wealth and natural beauty that has suffered more than its share of history's vicissitudes. His homage to the region’s architecture proclaims to the world that no one can understand Russia without beginning in the north."

The Architecture at the End of the Earth will be released on June 12. The book is already available for pre-order on Amazon.

William Brumfield, professor of Slavic Studies at Tulane University, is a historian specializing in Russian architecture, a photographer, a tireless defender of monuments, and the author of 35 books and dozens of articles on the problems of preserving the architecture of Russia, primarily in the Russian North. He is also a regular contributor to Russia Beyond the Headlines.

For the past five years,  Brumfield’s special section on RBTH, Discovering Russia, has shown our readers the most beautiful and remote corners of old Russia: the wooden churches of the north, the abandoned villages of central Russia, and historic sites near Moscow and St. Petersburg.