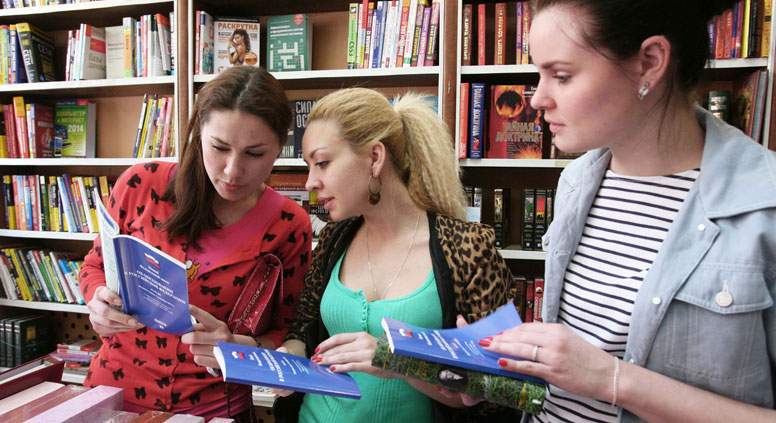 Besides Internet forums, libraries are the main places where readers can meet up. Source: RIA Novosti / Taras Litvinenko

Printed books are still the most popular format in Russia, but the use of electronic books is rising steadily. The statistics seem to suggest that less people are going to libraries, which in turn are diversifying their services to gain new subscribers and maintain a healthy volume of readers in the country.

According to survey carried out by Public Opinion Foundation this year, despite a rise the popularity of their electronic counterparts, most Russian readers still prefer printed books: 49 percent, as opposed to only 9 percent. However, this is only based on individuals who read at least once a month, and perhaps a more telling statistic is that 37 percent of those surveyed said that they do not read books at all.

29-year-old Anna Yudina loves to read and always buys books, even though she lacks the space to store them in her apartment. “I really love going to bookstores or just rummaging through bookstands on the streets,” she says. “I guess it’s the best way to relax. I then have to take them to my grandmother’s because my rented apartment is too small to keep them.” She explains that despite her passion for printed books, she is being forced to download more and more electronic books in order to take them on her business trips.

Vadim Mescheryakov, the director of the Mescheryakov Publishing House, explains that the percentage of people who read books has not changed for several generations. “Some of these people buy electronic books, but this does not prevent them from reading printed ones,” says Mescheryakov. According to the publisher, readers today are characterised by their solidarity.

“People who read books exchange opinions and buy after a careful selection process. They have become better connoisseurs of literature. Literary tastes are formed in childhood and are unrelated to trends. If parents have good taste, they'll pass it down to their children. Hence, a new generation of readers is formed and the percentage holds steady. It is also interesting that it is usually individuals on average and below average salaries who buy and read books, rather than wealthier members of society.”

According to Mescheryakov, the number of readers is not affected by new trends appearing in Russian cities, such as BookCrossing or Books in the Parks, where mini-libraries are set up outside. “If a book is well promoted and someone buys it, that doesn’t mean they will go on to read regularly. If someone reads a trash novel, they won’t move on to Dostoevsky.”

Mescheryakov believes that people are buying less books now than in the 1990s. “The prices are far higher these days,” he notes. “Russia has never had a particularly large reading public in relation to other countries. You will that find bookstores in Germany or France are far busier than in Russia, for example.”

Mescheryakov feels that bookstores should be supported through subsidies in order to change the situation for the better. The development of book networks will help readers get together in person rather than purely on the Internet.

Besides Internet forums, libraries are the main places where readers can meet up. According to the Public Opinion Foundation’s survey, the number of people visiting libraries has dropped slightly over the last few years, but Lilia Bagrova, the head of the Nekrasov Library, believes that there is actually growing interest in them.

“People are coming to us for information,” she says. “Because of the fragmentation of the information space into specializations, everyone is interested in knowledge integration, and librarians have become guides in the world of knowledge.” According to Bagrova, the Nekrasov Library now serves 9,400 readers annually, up from five to six thousand.

Many Moscow libraries are organizing events to attract readers. “Our library has the advantage of being in an exceptional building, so many people come to see that and then browse the books afterwards,” says Bagrova. “We have a club for book-lovers that meets at the library and one for movie fans. We organize joint events with schools, such as photography and other kinds of exhibitions. There are also approaches that are completely new to us, such as co-working and library tourism, where we take people around the library’s collections and explain its history.” 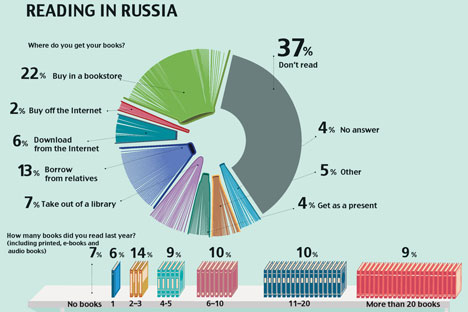