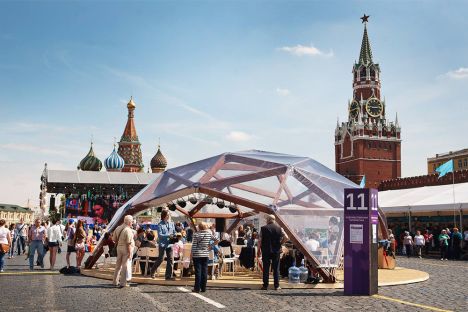 For the very first time in its history, Red Square hosts a literary festival 'The Books of Russia'. Source: Ruslan Sukhushin

The Books of Russia festival, a key event in the nationwide Year of Literature, took place in the heart of Moscow on June 25-28.

Visitors, publishers and book lovers alike were astonished by the scale of the festival: the whole of Red Square and part of the legendary GUM department store were covered with books. People were queuing up to enter the square from early morning on the opening day, not even being deterred by the bad weather. “The rain is a special guest that was not listed on the program,” joked Mikhail Seslavinsky, head of the Federal Agency for Press and Mass Communications (Rospechat), which organized the event.

Portraits and a pianist

The rain did not spoil the official opening ceremony either, especially as it featured a performance by famous pianist Denis Matsuyev. State Duma speaker Sergei Naryshkin invited readers to a reading feast and urged them to read and love books. “Today represents everything that is best and most significant about reading in Russia. Judging by the number of visitors attending this festival, we can safely assert that Russia continues to be the most well-read country in the world.”

Incidentally, the festival did not just cater to its visitors’ literary taste: a real feast was laid on at a makeshift book café. The menu was literature inspired, including such delicacies as scallop burgers called “The Tale of the Fisherman and the Fish” after a fairy tale by Alexander Pushkin. The dessert menu featured biscuits with portraits of famous Russian writers.

A special stamp with the Year of Literature logo and easily recognizable portraits of Pushkin, Gogol and Akhmatova has been issued to commemorate the festival.

The festival put particular emphasis on children’s literature. A lecture theater offering quizzes and master classes worked non-stop, dozens of publishing houses from all over Russia presented their new releases, and writers held seminars. “We continue to hope that a Russian J. K. Rowling will eventually emerge,” joked Vladimir Grigoryev, Rospechat’s deputy head and the festival director. “Although we see that 80 percent of best-selling children’s books are by authors who our grandparents read to us as kids.”

Russian President Vladimir Putin, who visited the festival on its first day, promised to allocate 50 million rubles from his personal fund for the support and distribution of children’s literature in the regions.

Adult literature from the regions was also represented at the festival. This zone featured publishing houses from 50 Russian regions, including Chechnya and Dagestan.

There was also a zone dedicated to e-books and online reading. The Bookbyte section discussed interactive textbooks, book digitalization, and problems in transitioning from paper to digital. During one discussion, Deputy Head of the State Children’s Library Olga Mezentseva said that the problem of e-reading was a false one: “It does not matter how children read: on screen or on paper.” 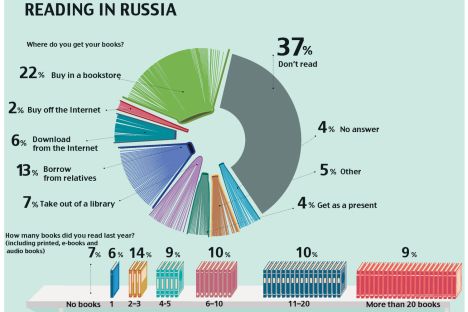 Mini ark on the square

There was a real “library” too – a pavilion with books and computers that fully measured up to its traditional counterparts. As its opening, the speakers recalled the mysterious story of the disappearance of the library of Tsar Ivan the Terrible, which housed some 800 unique books, including tomes from Byzantium. Up until the 20th century many subsequent rulers tried to find it, but none succeeded.

Russia’s first public library was opened in the very same Red Square. In 1705, with Peter the Great’s permission, a building was erected near St. Basil’s Cathedral where visitors could drink tea and coffee and buy a book. Incidentally, Peter the Great authorized vodka and snacks to be served in winter in the country’s other oldest library, at the Academy of Sciences in St. Petersburg.

“A modern library should be sexy. It should attract and surprise, offer something that readers do not expect,” said Yekaterina Geniyeva, head of the State Library for Foreign Literature. “The philologist Dmitri Likhachev used to say that if at least one library survives the world’s destruction, the world will come back to life again. It is a Noah’s Ark of sorts.”

Pictures from the festival can be found under hashtag #redbooks

The website www.godliteratury.ru features material from the Year of Literature 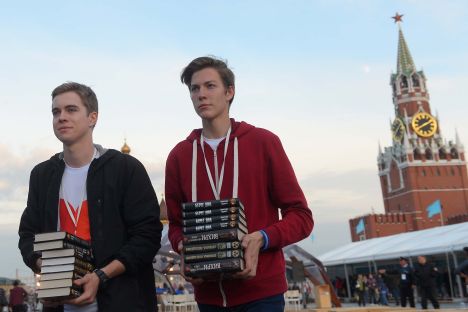 Multi-volume library of Russian literature to be published in the U.S.