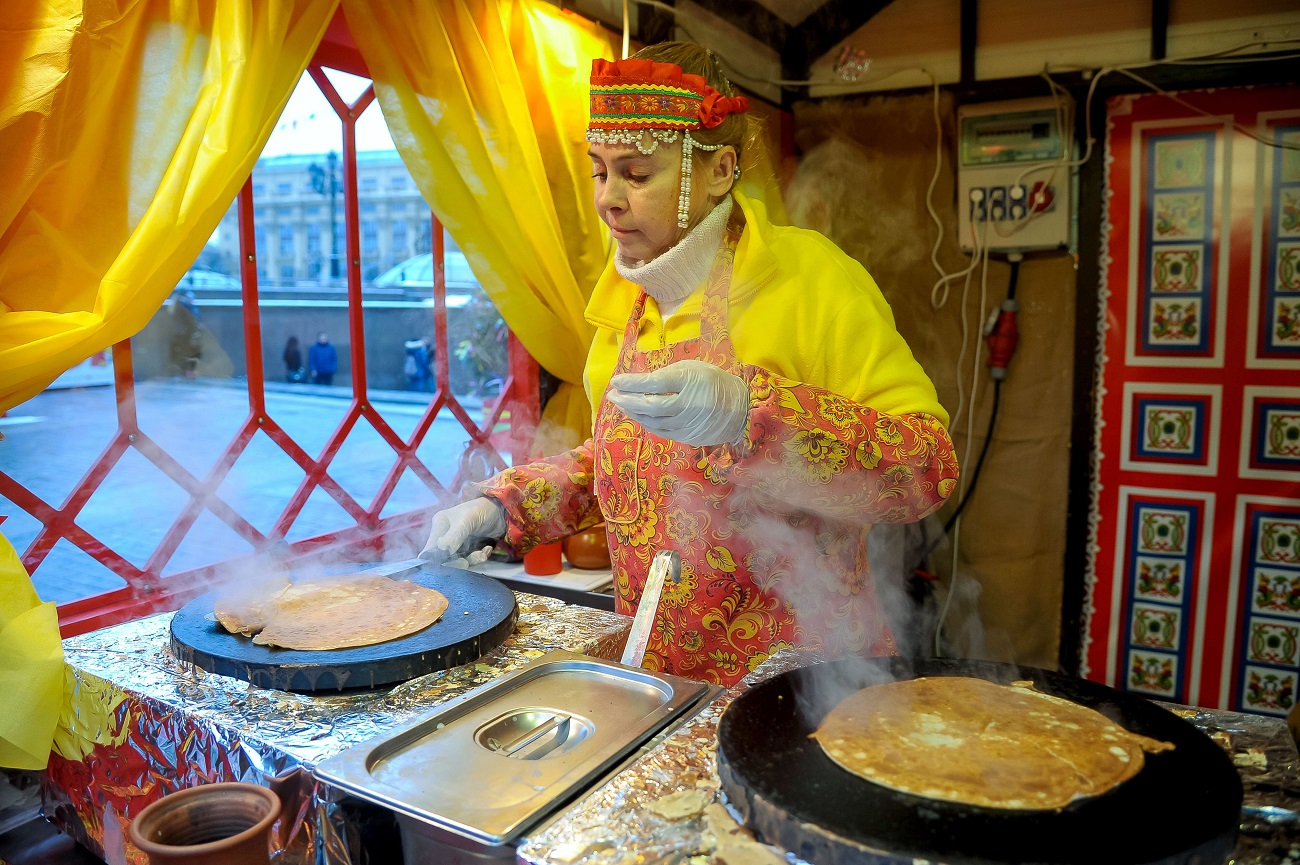 Maslenitsa festival in the center of Moscow.

Moskva Agency / Avilov Alexander
Feb. 20-26 is Maslenitsa week in Russia. A mix of Orthodox and pagan Slavic traditions, this week marks the farewell to winter and the beginning of Great Lenten fast, which lasts for 40 days. It is a time for having lots of fun and, most importantly, eating plenty of bliny, Russian pancakes. RBTH has published many recipes for these pancakes and explained how pancake week is celebrated in many countries, so now we would like to share an extract from Igor Klekh’s book Adventures in the Slavic Kitchen, published by Glagoslav in 2016.

[The word blin is the Russian equivalent for the soft English expletive “sugar”.]

What is left for us from the Shrovetide festivities is just bliny and Forgiveness Sunday, which maybe is not that bad. No longer do we need to ride the Russian hills (“to ride the hills, to wallow in bliny”), or hold dashing fistfights, or the necessary fraternizing with mothers-in-law, or the rather horrifying rite of the Kostroma burning [Kostroma is an East Slavic fertility goddess, who is usually portrayed as a straw effegy and ceremonially burned during the Shrovetide festival.] But the blin, being a solar sign and hand-made imprint of celestial bodies and resembling the lunar landscape with its blistered surface, is archaic in the extreme. By the way, has it ever crossed your mind that our tea drinking from a samovar, cups, and saucers very closely resembles our solar system? Food is food, but kitchen is a theater of ideological spectacles. Maslenichnaya (the adjectival form of Shrovetide, from the word “maslo” [that which is being spread]) or Cheesefare Week (when in anticipation of the 54 Maslenitsa, which originally came from pagan holidays marking the vernal equinox, now is celebrated as the week of carnival before the Lenten fast begins). Bliny play a significant role in the celebrations, both as a symbol of excess before the fast as well as a symbol of perfection in terms of their round shape. The Great Lenten fast, where one already abstains from meat, should have been called “Bliny” Week by the name of its main ritual dish (“blin” is a distorted “mlin” or “mlinets,” that is, a dish made out of ground grain). The “blin” is a commemorative dish, but at the same time a life-asserting one. It resembles a burial shroud, but it also feeds you and imparts you with a life force. And when red caviar is folded into the blin, it promises life beyond the threshold of death. The bliny can be dipped into Slavic sour cream or a mushroom sauce, into sunny honey or melted butter; you can fold them into an envelope-like shape and fill them with various kinds of stuffing, but by themselves they have to be simple and primal with almost zero taste (like water in the desert and bread without additives, like raw oysters and avocado flesh, like brut champagne and clear vodka).

Our Maslenitsa is a sister of European Carnival, a similar pagan, pre-Christian festival of the banishment of winter (not the season of the year but the embodiment of the death of nature). Orthodox Christianity transformed Maslenitsa into one part of the swing’s amplitude – which through the revelry of Maslenitsa festivities and the ensuing Forgiveness Sunday is capable of throwing the congregation straight into Bright Monday, the beginning of Great Lent, and to remind the rest of the people how important it is for every family at least a few times a year to bake pirozhki pies and make bliny so that our children would not grow up to be freaks of nature.

The pan for making the bliny (if you do not have one especially designated for this purpose) must be thoroughly rubbed with large grain salt mixed with butter, heated, and oiled with vegetable oil (you can use a halved onion or a tight wick for this purpose, but to everything else I prefer a cube of salo on a fork; it is non-canonical but effective). The sponge dough (with sugar, salt, milk, water, whipped eggs, and various oils), after it is “brought down” a couple of times, should have a liquid quality like a thin sour cream. The bliny are fried no more than 1 minute on each side, then they are stacked, buttered, and served hot or at least warm (never serve cold bliny, there is nothing worse in culinary art than wasted work). Those who are apprehensive about yeast or the word “sponge dough” or anything like that, may simply add the flour to kefir, and even these bliny, simplified but prepared with feeling and understanding come out tender and tasty.

Mushroom sauce for the bliny is prepared as follows: in a deep frying pan or sautй pan fry finely cut champignon mushrooms and lightly sautйed onions for 10 mins. Add chopped garlic, greens, salt and pepper, pour sour cream over the mixture and sautй covered, on low heat, for about 15 min. Put the cooked sauce into a bowl and either spread it over or spoon it onto a blin; roll the blin and eat it. Or you can dip the blin into your own personal bowl. At home no one will criticize you for doing it, but the process is more convenient and tastier with the use of a knife and fork.