How to read and comprehend
a Russian icon

An intricate guide to this enigmatic art form

The icon is an integral part of not only Russian culture, but also of Europe during the Middle Ages, which had a different chronological timeline than in Russia.

Unlike Western European countries, Russian art skipped the Renaissance. The Middle Ages in Russia lasted from the end of the 10th century, when early Russia adopted Christianity, until the turn of the 17th and 18th centuries, when Peter I ascended the throne and channeled the country's culture in a different direction. However, the development of the icon never stopped and later icons and holy pictures were painted for new churches, where you could find traces of Baroque and Rococo art, classicism and Art Nouveau.

Nevertheless, the basic principles evolved during those seven earlier centuries, when ecclesiastical art prevailed over its secular counterpart.
A reverse perspective
The main feature of the visual language of Russian icons and the principal difference from the Western European tradition is its use of reverse perspective. A reverse perspective is a drawing with vanishing points that are placed outside the painting that creates the illusion that these points are "in front of" the painting. Thus, the saints or a scene from the Scripture depicted in an icon are brought forward into the space between the viewer and the icon plane.

Deposition in the Tomb (c. 1497), Rostov icon, Museum of Old Russian art
The image becomes a window into the sacred world, undetectable to the human eye and beyond logic. Due to the reverse perspective the world opens up in front of the audience, striking in its cosmic scale.

Interestingly, even when the old Russian icon painters became acquainted with the linear perspective, they didn't use this technique in icon painting because it didn't correspond to the purpose and the meaning of the icon.

Composition
In all ancient icons the wooden panel features a noticeable deepening called the "ark" (cut-back center portion of the icon panel), where the image is placed. This allows for the separation of the earthly world where the spectator lives from the heavens that is depicted on the icon.
Above : Saint Theodore's miracle
Below: Saint Basil the Holy Fool (L), late 16th - early 17th century;
Saint Nicholas (R), mid 16th century
The icon's composition freely unites events that occurred at different times. For example, the icon of the Dormition of the Theotokos includes the death of Mary, the ascension of her soul by Christ and angels into Heaven, the grieving of the apostles at her deathbed and apostles flying through the clouds from the four corners of the Earth to say farewell.

The key event is not just placed in the center, but is also highlighted by focusing in on it. Thus the viewer immediately grabs the essence, and then, looking into the icon, comprehends the details of the narrative.

The Russian icon as a phenomenon was discovered only in the early 20th century when restorers learned to remove centuries-old grime and candle soot from the surface.

Before that the icon had been considered ancient gloomy art, but this all changed when the bright and shining paintings managed to break free from the dark layers of old dirt, grime and varnish.

The golden background of icons is a symbol of the spiritual world and divine radiance. It conveys the magnificence of the Heavenly Kingdom where there is no night.

That is why the folds and parts of the garments of Christ, the Virgin Mary and the saints were painted with gold. Sometimes the gold color was replaced with yellow paint, but the meaning remained the same.

Color
In the icon each color has its own meaning. 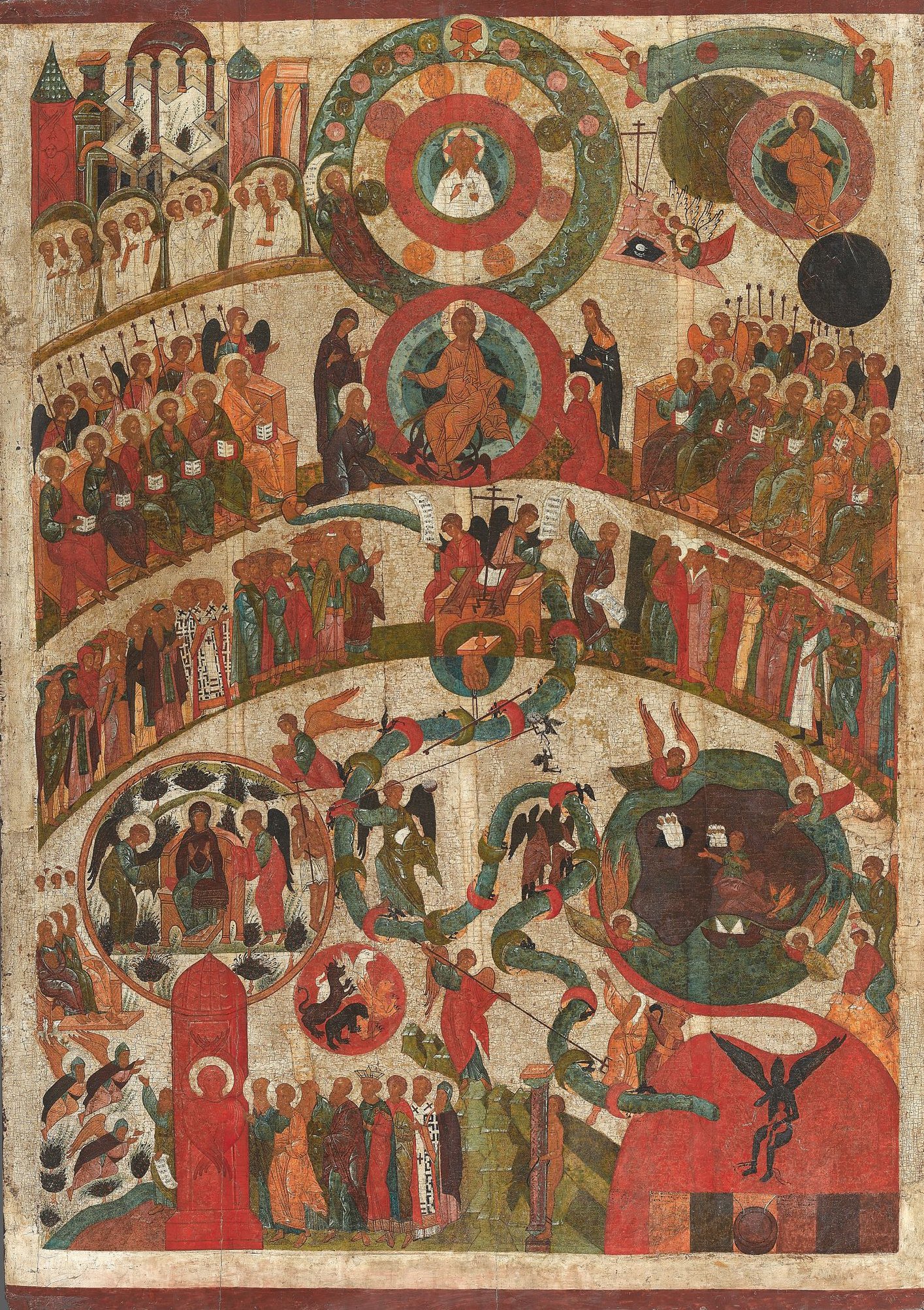 Last Judgment, 16th century. Source: Tretyakov Gallery
Gray is the only color never used in an icon. A mixture of white and black or good and evil it was perceived as the color of uncertainty and emptiness. It has traditionally been considered inappropriate in icon art.

Ivory black
Ivory black, also known as bone char, was originally produced by burning ivory and mixing the resulting charcoal powder with oil. The color is still made today, but ordinary animal bones are substituted for ivory.

Cobalt
The word cobalt is derived from the German kobalt, from kobold meaning "goblin," a superstitious term used for the ore of cobalt by miners.

Carmine
Carmine may be prepared from cochineal, by boiling dried insects in water to extract the carminic acid and then treating the clear solution with alum.

The ideal form
A circle as the most harmonious and perfect form is another way to designate the heavens, in contrast to a square that symbolizes the Earth. In an icon you can see the drawn circular aureoles of the saints.

Icon painters often place the figure of Christ and the Virgin Mary in round or oval mandorlas in their moments of glory.
Above: Image of Edessa, 12th century.
Below, L-R: Sophia the Holy Wisdom, 1618;
The Transfiguration of Jesus, 16th century. Source: Museum of Russian Icon;
Our Lady of the Don, back side. Source: Tretyakov Gallery
In Andrei Rublev's major icon "The Trinity," silhouettes of angels form a circle.
The Trinity by Andrei Rublev. Source: Tretyakov Gallery
Canon
Iconographic images are subject to the Canon, which was borrowed from Byzantium and supplemented and partly revised by Russian masters.
Left: The Conception of John the Baptist and its drawing by Anastasia Troshchenkova
Right: Fragment of the Resurrection of Lazarus, 15th century,
and its drawing by Anastasia Troshchenkova
In practice, this means that icon painters used a tracing tool such as a contour stencil and the so-called Icon-Painter's Guide – books with detailed descriptions of each saint.

Whether the subject had a rounded or a sharp beard, or if he is a young or old man and what color his clothes were – all these details help the viewer understand the icon.

Three stars
If you see three stars on the shoulders and forehead then this is God's mother.

A casket and a spoon
A small casket with medicines and a spoon are the attributes of St. Panteleimon The Healer

White kerchief, closed eyelids
One of the most revered saints – the Matrona of Moscow, who lived in the first half of the 20th century – is portrayed with her eyelids closed over empty eye sockets.

Model of a temple
A miniature model of a temple or a monastery on the palm refers to one of the Russian Orthodox Church's most revered saints – this is how Sergius of Radonezh is depicted.
Some of the images are not so easy to understand. For example, you can see small circles with the same wings as the angels had in the 14th century Novgorod icon, "Paternitas with Selected Saints" (which is featured in the collection of the Tretyakov Gallery). Thus, since Byzantine times these images have been described in the Bible, yet they have not been personified with heavenly virtues.

The lives of the saints
Hagiographic icons became widespread in Russia. They focus on the life of the saint from their birth to canonization and glorification.

Around the central field, which shows the saint, there are border scenes – a succession of small episodes depicting the most important moments of his life.

It is necessary to study the icon from left to right and from top to bottom, i.e. starting with the top left corner, top row first and then the left and right scenes around the central image.
Icon of Boris and Gleb, 2nd half of the 14th century, and its fragments
The iconography and stories of some Russian icons are unique and don't have Byzantine prototypes, as they are related to holy days that are celebrated only by the Russian Orthodox Church.

The historical plot is taken from the life of Andrew the Fool-for-Christ from Constantinople. He had a vision that the Virgin Mary appeared during the siege of Constantinople, spreading her handkerchief over the city to protect it from enemy attacks. The ambitious prince made a similar claim of protection over Russian lands.

Source: The Museum of Russian Icon

According to the legend, the icon was taken from Vladimir to the new capital, Moscow, in 1395 during Tamerlane's invasion. At the exact same time that the icon was transferred to Moscow, the enemy turned away from the city.

The tradition to protect the most revered icons with the "oklad," a setting made of gold or silver with precious gems, originated in Byzantine art. However, in Russia it has a special meaning.

Symbolically, the setting played the same role as the golden background – it showed the light and beauty of God's world. Kings and emperors ordered them from best jewelers and now they attest to the development of decorative and applied arts.
Tomb iconostasis of princess Sophia in the Novodevichy Convent of Moscow
Above: The Holy Trinity of the Old Testament
Below, L-R: Our Lady of Feodotyevo; Christ Pantocrator; The Intercession of the Theotokos
Where to get a glimpse of Russian icons?
In Moscow

The Tretyakov Gallery, www.tretyakovgallery.ru
The Moscow Kremlin museums, www.kreml.ru
The Andrei Rublev Museum of Early Russian Culture and Art, www.rublev-museum.ru (website in Russian only)
The Museum of Russian icon www.russikona.ru