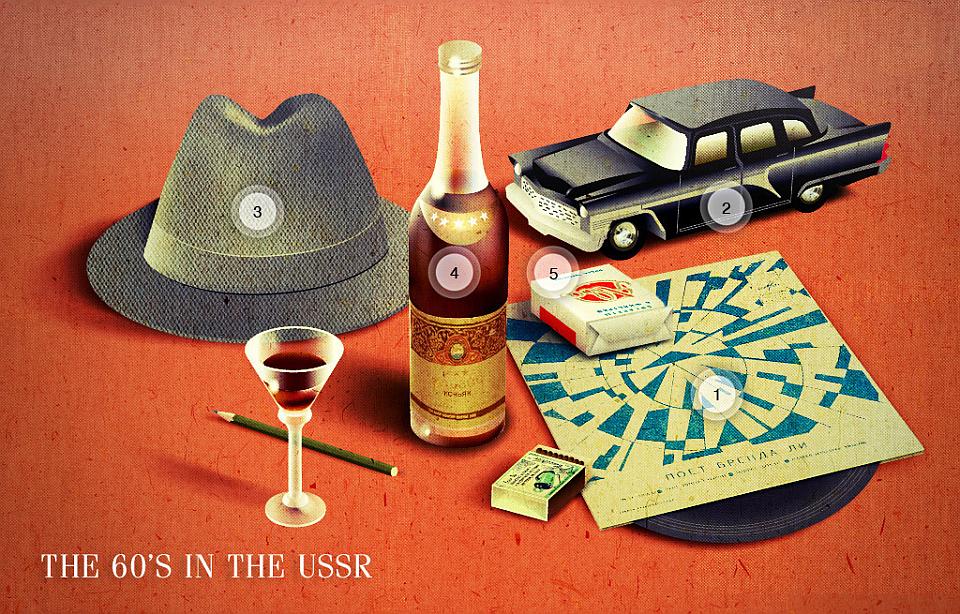 Of the top 10 best selling albums of the 1960s, the top six were by the Beatles and perhaps that fact speaks for itself. Although this era goes down in music history first and foremost as one of rock and roll, the inhabitants of Madison Avenue nonetheless preferred other records.

For a modern Russian citizen, the Beatles are as much immortal classics as they are for residents of any other country. However, in the sixties, only the lucky ones could boast of having Beatles records in their collections. However, Soviet pop music produced many perennial hits, too.

The postwar years were a breakthrough era in the development of auto transport in both the United States and the Soviet Union. If the symbol of the 1950s was steel hardtop classics like the Chevrolet Impala, legends such as the Ford Mustang appeared in the 1960s.

A popular slogan in the Soviet Union was: “The automobile is not a luxury but a means of transport.” However, this statement was far from the truth – very few people back then could afford a car. But the main object of everyone’s dreams always was and remains the GAZ-13 Chaika (Seagull), the contemporary of the Chevrolet Impala.

"Hats, hats, hats — whether it's a fedora or a fascinator, you can't go wrong.” That’s how the creators of Mad Men characterize one of the main pillars of their characters’ dress code. However, 1960s fashion is by no means remembered for the style of Manhattan residents, but for the looser customs of young people of that time.

Like in the U.S., the Soviet sixties had two completely different types of fashion. On the one hand, there were the timeless suit jackets and hats for serious men. On the other, it was the era of the “mods,” who chose bright clothes as a form of social protest.

The 1960s were an era of soothing and “respectable” cocktails. The creators of Mad Men politely suggest what to pour into the glass to evoke the spirit of Madison Avenue: a Gimlet, Old Fashioned, Brandy Alexander and, of course, Manhattan.

For a number of reasons, mixed drinks were not popular in the Soviet Union, but that doesn’t mean that the Russian contemporaries of the characters on Mad Men didn’t care for the taste of spirits. The merits of Soviet brandy, for example, were highly appreciated by Winston Churchill, a famous connoisseur of refined beverages.

The sixties were for smokers. Perhaps this could say it all, were it not for one fact. It was during the era of Mad Men that filtered cigarettes, now well known to us, became massively popular. And the biggest contribution to this process was made by advertisers, who worked on the image of the Marlboro brand.

It was during the 1960s in the Soviet Union that Java came out with the first king-size filtered cigarettes. For many years, this brand was practically the standard of quality for people in the country. However, outside the major cities old-fashioned hand-rolled cigarettes were still smoked, along with bizarre “goat leg” shaped ones.