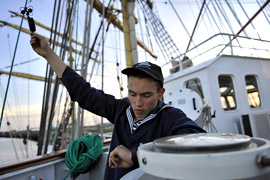 A cadet from the Baltic Fishing Fleet State Academy during a readiness exercise on the Kruzenshtern ship near the French city of Brest. The barque was expected to arrive in London for Olympic Games after a layover in Brest. The ship, however, later changed its route after the Federal Steam Navigation Agency warned the crew against approaching London, after it was implied that the ship might be arrested as retaliation over the Schneerson library dispute, which sees US-based Jewish organization Chabad Lubavitch demanding the return of the books from the Schneerson collection, nationalised in Soviet times and held in the State Library. Source: Kommersant