‘Noise ReConstruction’: back to the era of 1900s 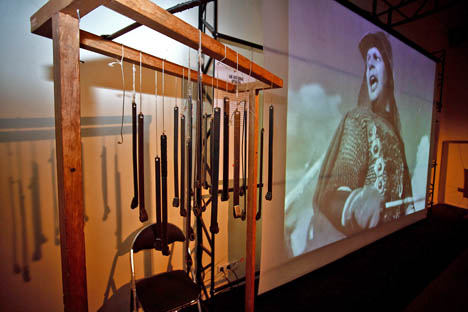 The noise level hovering at around 100 decibels all day long and not a single attendant in the museum hall – these are the results of a bold project to reconstruct the noise devices invented by Vladimir Popov between the 1920s and the 1950s and give visitors of Moscow’s Polytechnical Museum an opportunity to test them.

There is certainly a reason why this interactive exposition by musician Pyotr Aidu and his band, Music Laboratory, is entitled ‘Noise ReConstruction’. The project is actually about double reconstruction: first, it is about the manual restoration of the devices that Popov designed for the creation sound effects in the theatre; second, it is about reproducing everyday noises, which can be mimicked by those wooden and metal instruments. This way, the exhibition organisers intend to demonstrate one of the numerous sound experiments of the Russian avant-garde period.

In four of the museum’s halls, visitors can examine 70 of the 200 ‘noise machines’ that were created by Popov (1889-1968) for theatre productions and then passed on to filmmakers. The first hall accommodates tools imitating the sounds of various transport vehicles: you can reproduce the sound of a steam locomotive by rubbing wooden and metal rods against each other. In the second hall, the acoustic illusion of a rain can be created by turning the handle of a drum filled with chips. The third hall is given over to industrial sounds imitating factory noises, while the last hall is dedicated to battle sounds, where visitors can recreate the sound of swords crashing against shields with the help of a machine that pounds hammers on steel sheets.