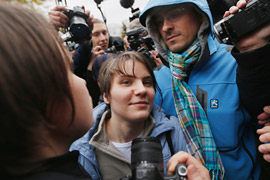 Freed feminist punk group Pussy Riot member Yekaterina Samutsevich, center, speaks outside a court in Moscow, Wednesday Oct. 10, 2012. A Moscow appeals court on Wednesday unexpectedly freed one of the jailed Pussy Riot members, but upheld the two-year prison sentence for the two others jailed for an irreverent protest against President Vladimir Putin. The Moscow City Court ruled that Yekaterina Samutsevich’s sentence should be suspended because she was thrown out of the cathedral by guards before she could remove her guitar from its case and take part in the performance. Source: AP.