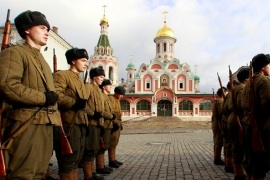 Russian servicemen, dressed in historical uniform, take part in a military parade rehearsal in Red Square in Moscow on Nov. 5. The parade will be held on Nov. 7 to mark the anniversary of a historical parade in 1941 when Soviet soldiers marched through Red Square towards the front lines at World War Two. Source: Reuters/Vostock-Photo