Russians express their condolences to victims of shooting at Connecticut school 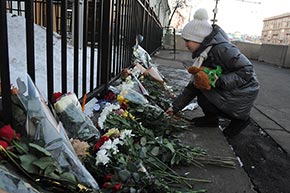 Russian putting flowers in front of the U.S. Embassy in Moscow to express their condolense to the victims of the the shooting at Sandy Hook Elementary School in Connecticut. Media reported earlier that Adam Lanza, 20, first shot his mother at home. Then, armed with several firearms, he drove to the nearby school and shot and killed 20 children and six adults before turning his gun on himself. The latest reports indicate that 27 people were killed in the shooting at the Connecticut school. Source: ITAR-TASS