Business
Ksenia Zubacheva
Since 2014, Russia has been working tirelessly on the monumental project, which will eclipse Portugal’s Vasco da Gama Bridge by two kilometers. 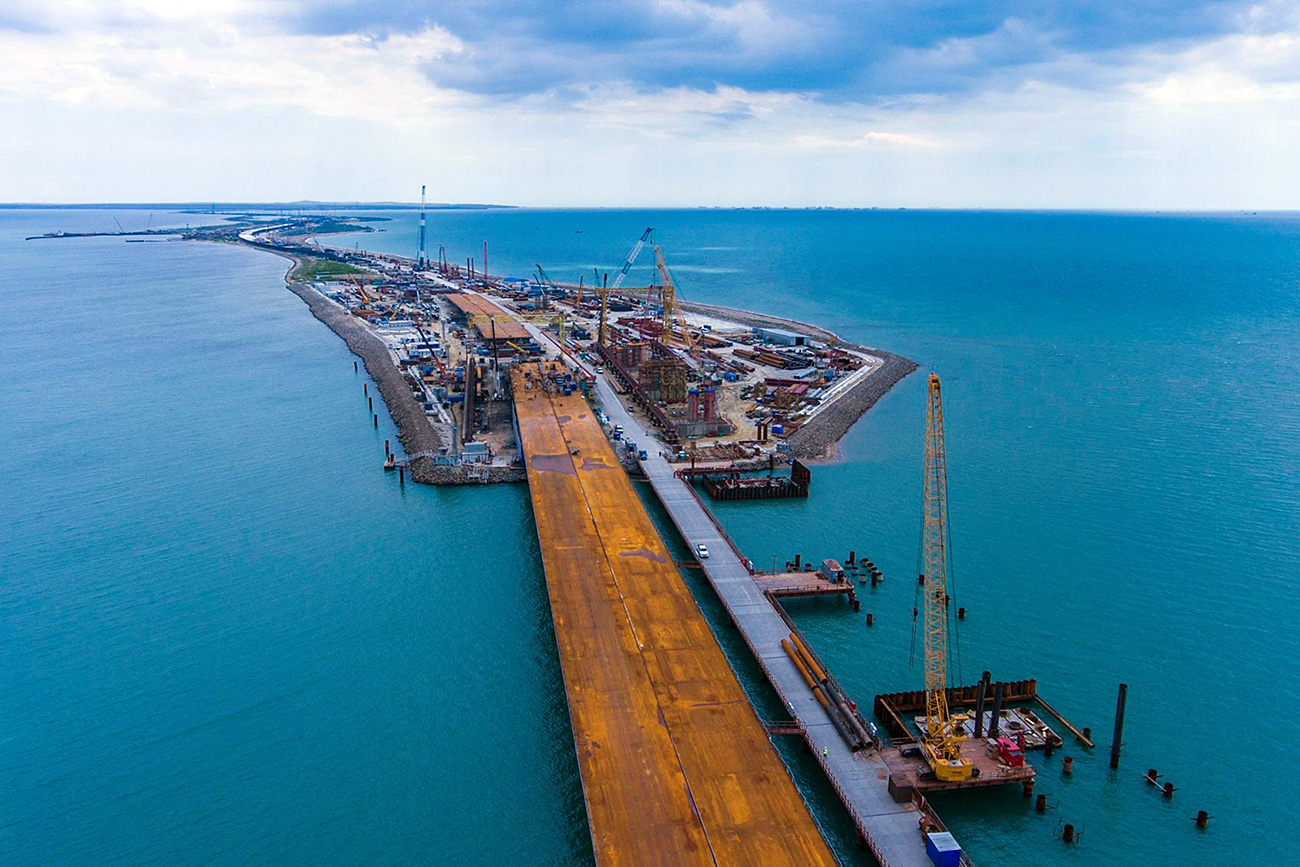 Probably one of the most ambitious engineering projects in Russia’s history: A 19 km (12 miles) road-and-rail bridge to Crimea. Simply known as the Crimean Bridge, or the Kerch Strait Bridge, so far it’s right on schedule and on July 17 the Russian Ministry of Transport announced the massive thoroughfare was 75 percent complete. It’s hoped it will open by December 2018, connecting Crimea’s Kerch Peninsula to the Taman Peninsula of the Krasnodar Region.

A personal initiative of President Vladimir Putin, the bridge is a demanding and technically complex project costing 228 billion rubles ($3.8 billion). Here’s what you need to know about the construction project of the century.

1. The possibility of a bridge was discussed even before Crimea became part of Russia. During the 2000s, Ukrainian and Russian experts examined the possibility of creating a transport corridor between the two nations and in 2008 they agreed to build the Kerch Strait Bridge by 2014, but work never started. 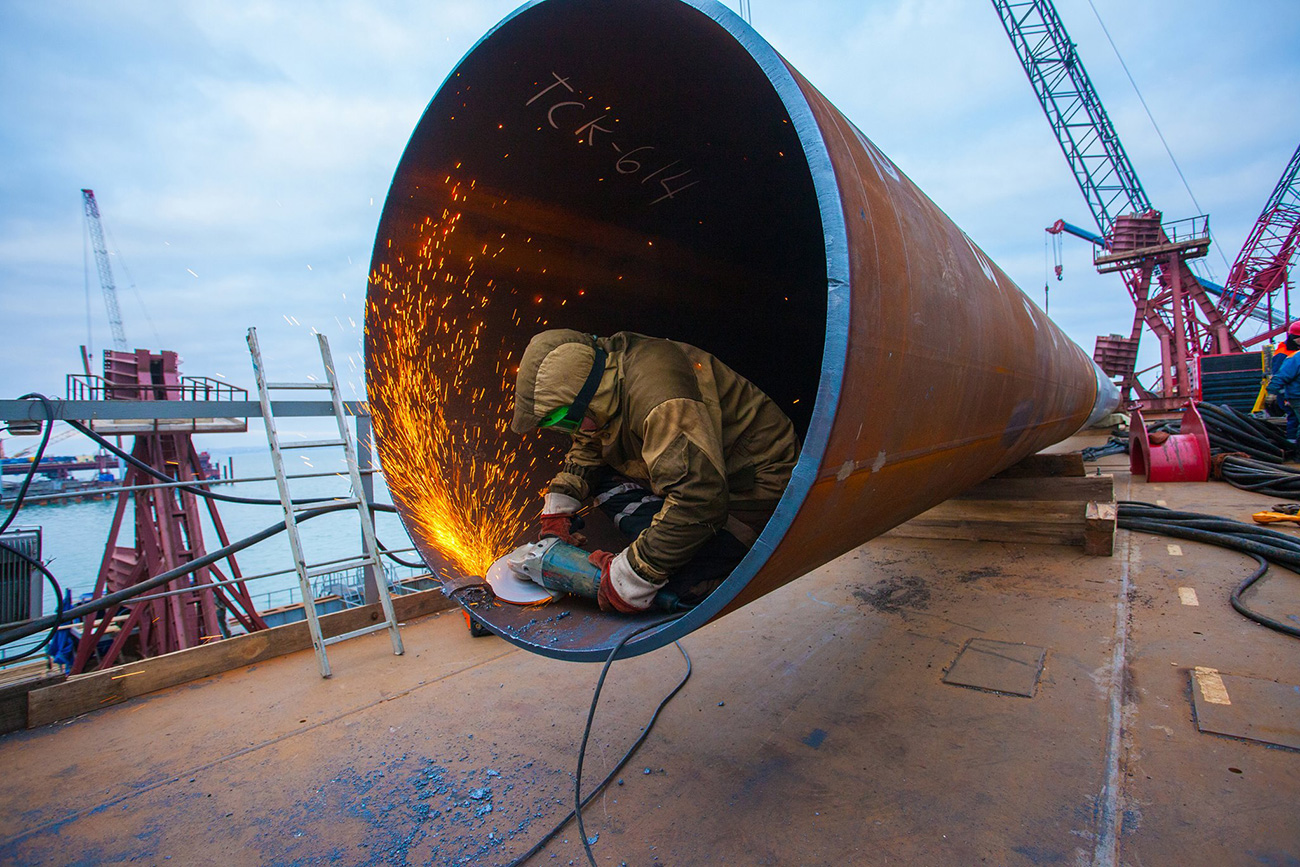 Work on the construction is going seven days a week. Source: www.most.life

2. Work on the superstructure is going on at both ends, so eventually it will meet in the middle. More than 20 ships and 5,000 people are laboring around the clock, seven days a week, in a bid to complete the project by the end of next year. Over 30 companies are involved in the construction.

3. The bridge’s highway will have four lanes and expects to accommodate up to 40,000 cars each day. The speed limit will be 120 km/h, toll free, and it will take about 10 minutes to drive from end to end by car. 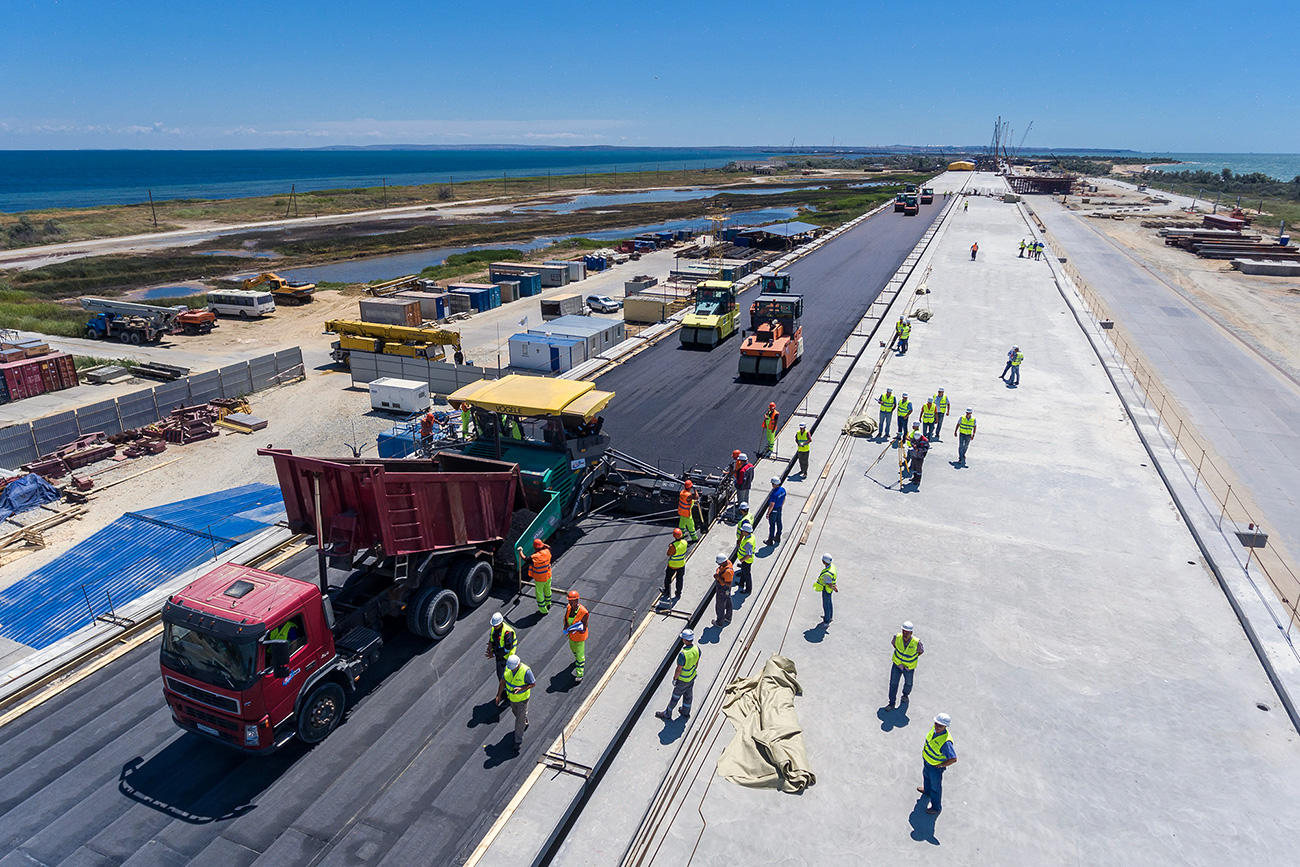 4. There will be two railway tracks, taking 47 trains per day, travelling maximum speeds of 120 km/h (passenger) and 80 km/h (cargo). Carriages are planned to chug across the stretch in 2019 - currently the rail infrastructure is only 55 percent complete.

5. The bridge will not hamper shipping in the Kerch Strait. It will have special 227 meter long, 35 meter high archways to allow boats to pass underneath. 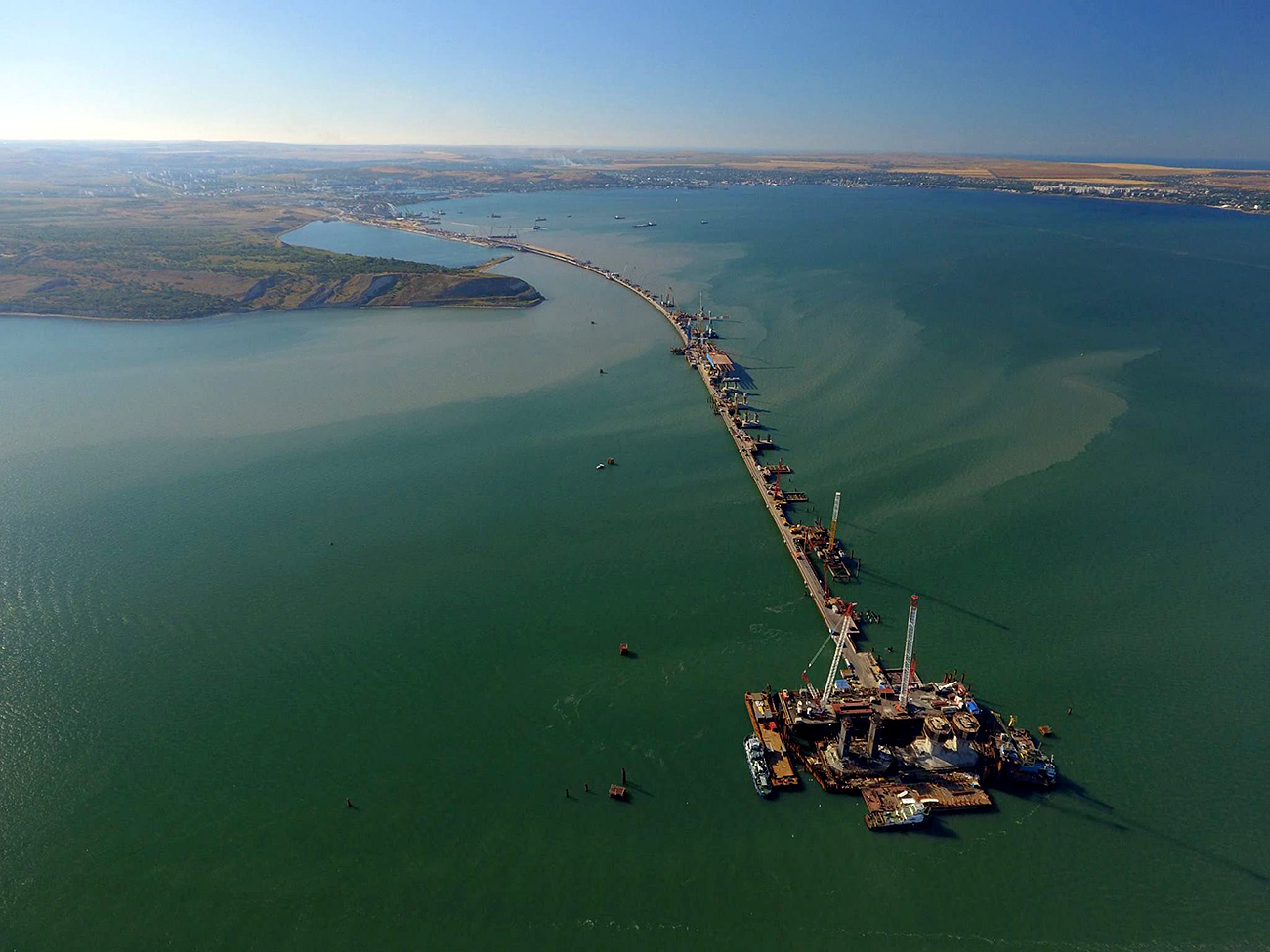 The bridge will be built to withstand earthquakes. Source: www.most.life

6. The bridge is being built in a tectonically and seismically active zone, so to minimize potential risks, the constructors are using three types of piles – bored, tubular, and prismatic – drilling them at depths of 45, 90, and 16 meters respectively. Overall there will be a total of 7,000 piles to support the Crimean Bridge’s 595 pillars.

7. It will be built to withstand earthquakes measuring more than nine on the Richter Scale. It will also be protected from ice drifts in the Strait during winter. Other natural factors (like storms, waves, flooding, erosion of the shores) and the potential ecological impact of the project have also been taken into account by developers. 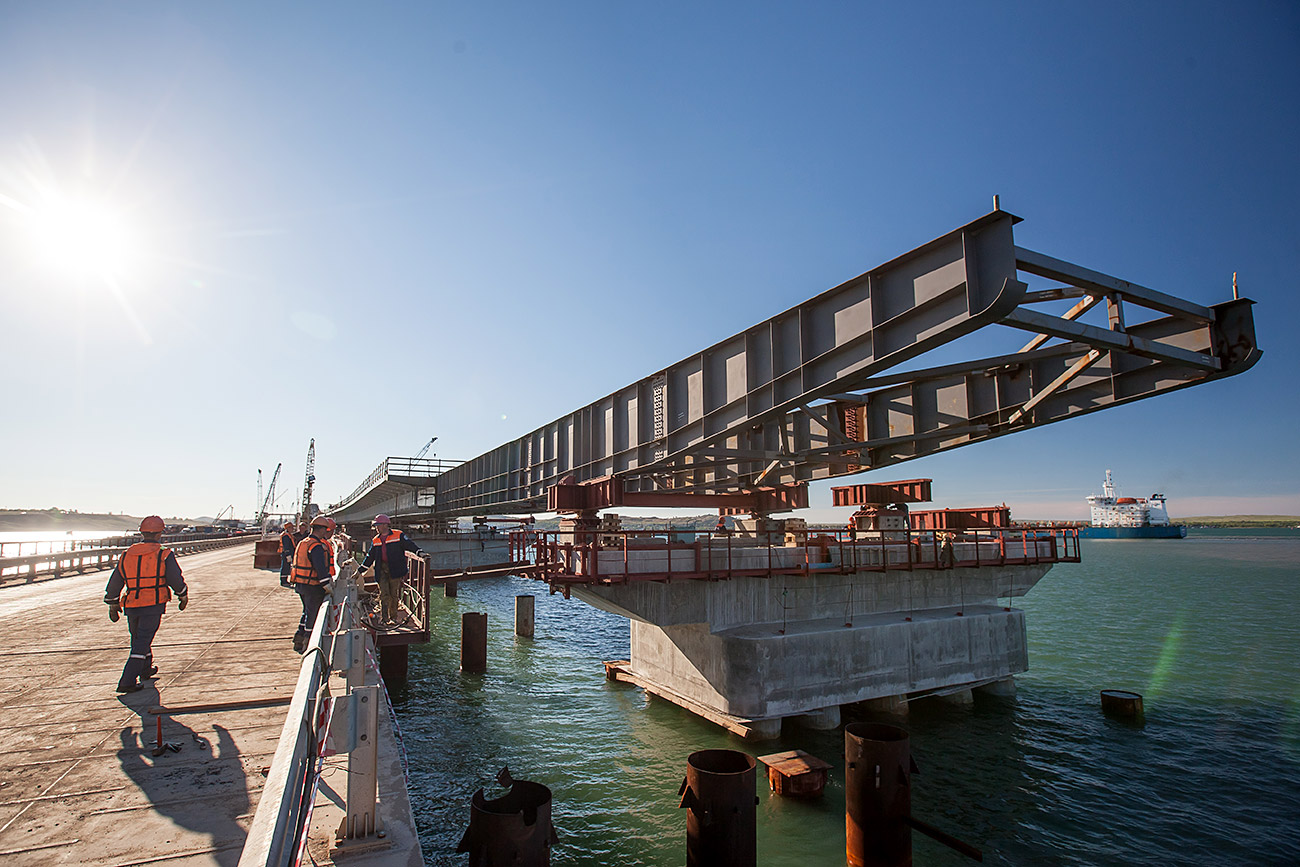 The lagging of sea spans of the road bridge, June 2017. Source: www.most.life

8.  Due to the history of the Kerch Strait - especially during the Great Patriotic War, when it witnessed many fierce clashes - archeologists and sappers examined the seabed before construction began. A selection of historical objects was discovered, not to mention 700 mines, which had to be diffused!

9. The Crimean Bridge will be the longest not only in Russia, but also in Europe. It will even bypass the Vasco da Gama Bridge in Portugal (17.2 km).

10. The structure will be illuminated in the colors of the Russian flag by special lights. The road arch will be blue, the railway arch red, while other parts white.

How the future bridge will look like. Source: www.most.life