Hovering over one of the most remarkable Russian churches (3D tour) 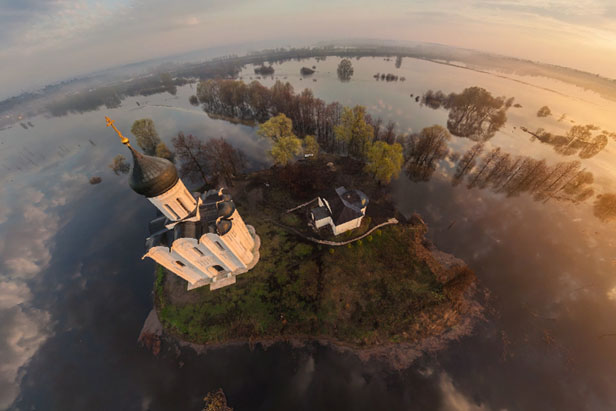 "The idea to photograph The Church of the Intercession on the Nerl River, the famous monument of medieval Russia, was rather spontaneous. I heard in the news that the territory near Ryazan city was under the state of emergency: nearly 500 houses were flooded by the high water," - recalls Stanislav Sedov, who was taking these wonderful pictures with Dmitriy Moiseenko.

The aerial panorama is provided by Airpano.com

The Church of the Intercession of the Holy Virgin on the Nerl River (1165 AC) near Bogolyubovo village is a greatest monument of Russian architecture. Being an important component of the White Monuments of Vladimir and Suzdal, the Church belongs to the World Heritage of UNESCO. This remarkable Russian heritage attraction was built on the man-made hill, at the confluence of Nerl and Klyazma Rivers. The 5-meter deep foundation of the Church was especially designed to protect it from flood. The amazing fact: it took only one year to build this Church. The Life of Andrey Bogolyubsky says «This church is to by erected within one year and create home for monastics". This chronicle shows that the Church is related to the victorious campaign of Vladimir's army to Bulgarians, and to the death of Knyaz Andrey's son Izyaslav.

It is a miracle that the Church of the Intercession has survived to our days. At the end of 18th century the abbot of the Bogolyubsky monastery, under whose supervision the Church of the Intercession of the Holy Virgin was kept, decided to disassemble the building - it didn't bring any profit - because the monastery needed bricks to build a belfry. Fortunately, the abbot didn't have enough funds to commence the demolition. Unfortunately, original interior frescos were lost during its reconstruction in 1877.