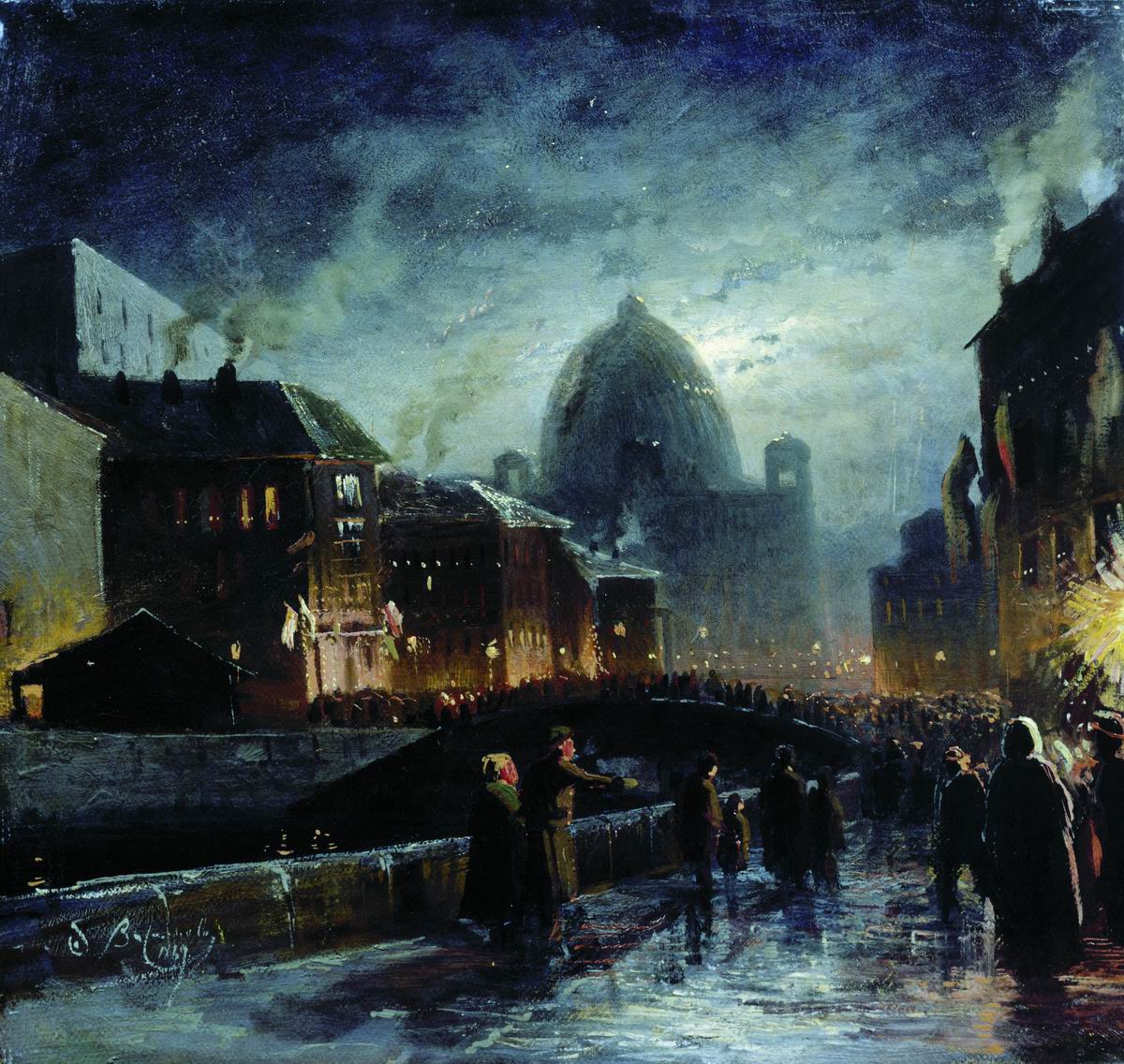 The first street lighting in Russia appeared in St. Petersburg. The event is tied to the date of November 23, 1706. From that moment on, any major celebration would see lanterns hung on the building facades of the four main streets of the city. / Illumination in St. Petersburg, Fyodor Vasilyev

Fyodor Vasiliev
St. Petersburg has been home to many great Russian poets, writers, artists, and scientists. In our selection, all the hues and tints of the “cultural capital” are captured on canvas. 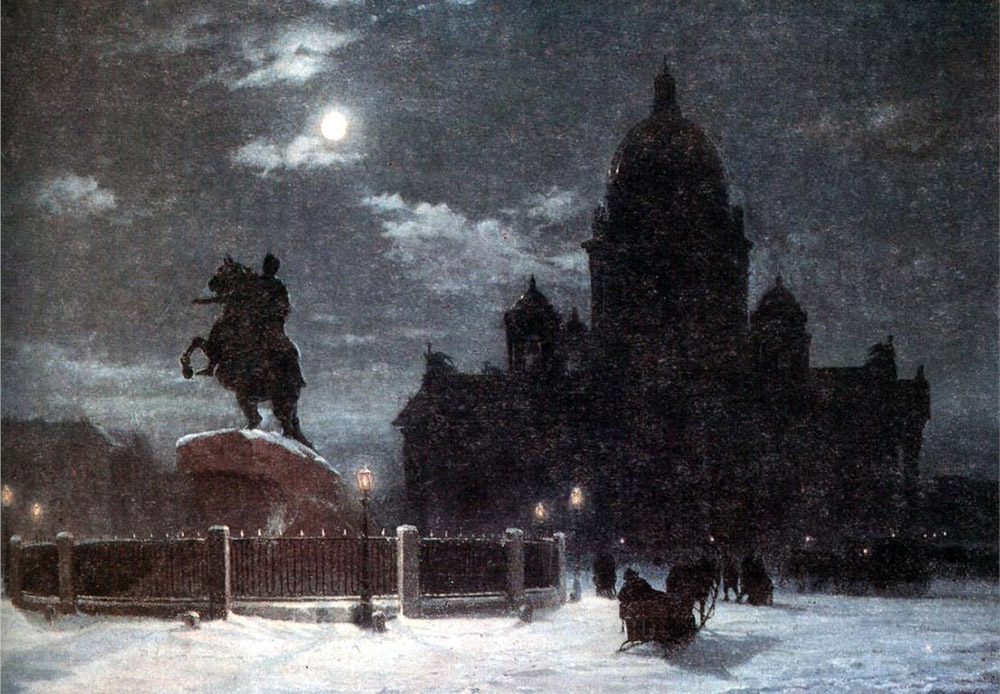 "St. Petersburg is the cultural capital of Russia", - it is often stated by natives of St. Petersburg. And although Muscovites do not always agree with them, the number of museums, monuments, and historical buildings per kilometer here is record-breaking. The city on the Neva (as St. Petersburg is also known) has been home to many great Russian poets, writers, artists, and scientists. In our selection, all the hues and tints of the "cultural capital" are captured on canvas. / View of the monument to Peter the Great on Senate Square in St. Petersburg, 1870, Vasily Surikov 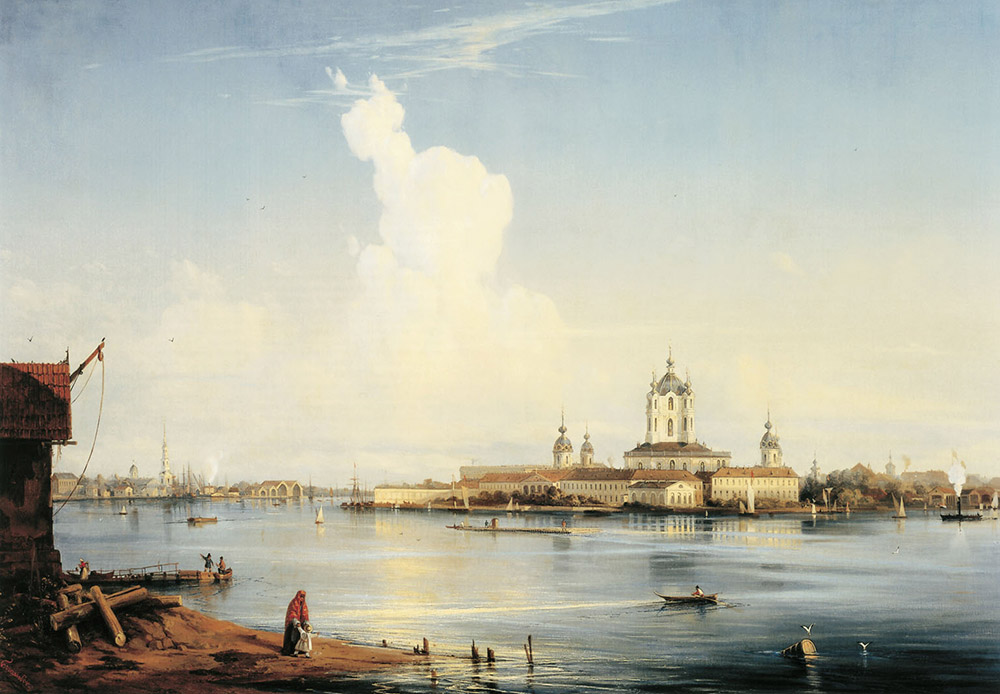 View of Smolny Cathedral. In 1740, Empress Elizabeth ordered the construction of a monastery on the site of Smolny House, the palace where she had spent her entire childhood. The project was entrusted to Bartolomeo Rastrelli, a Russian architect of Italian origin. / Smolny as seen from Bolshaya Okhta, 1852, Alexei Bogolyubov 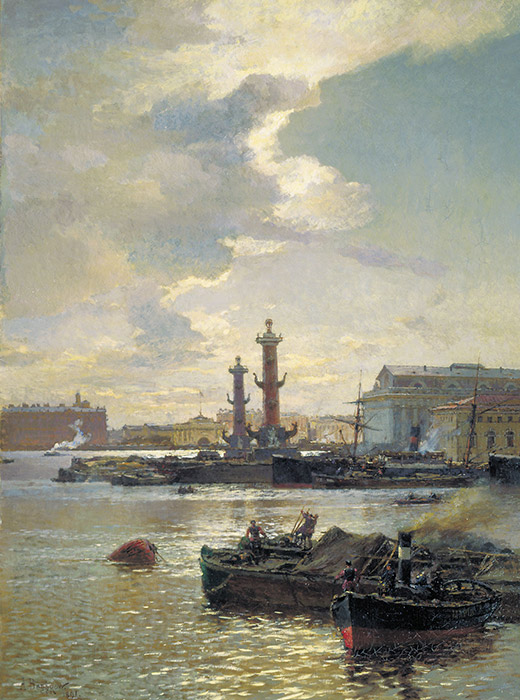 The city was built in a swampy area, on the Gulf of Finland, at the mouth of the Neva River. During its 300-year history, according to various sources, about 300 floods have been recorded in St. Petersburg. / St. Petersburg barge, 1891, Alexander Beggrov 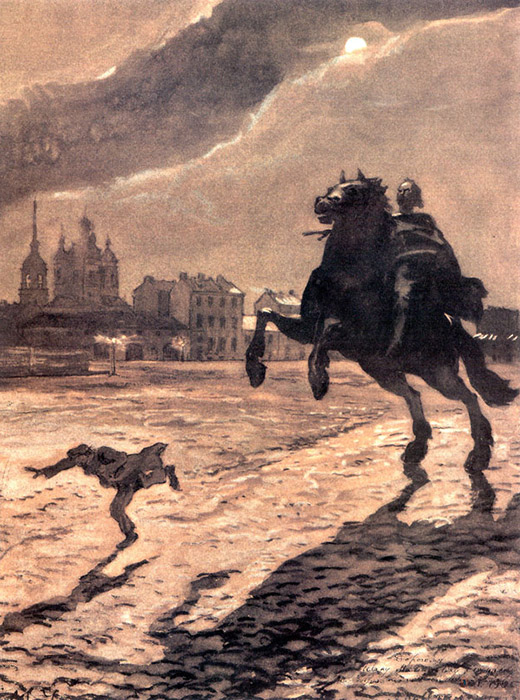 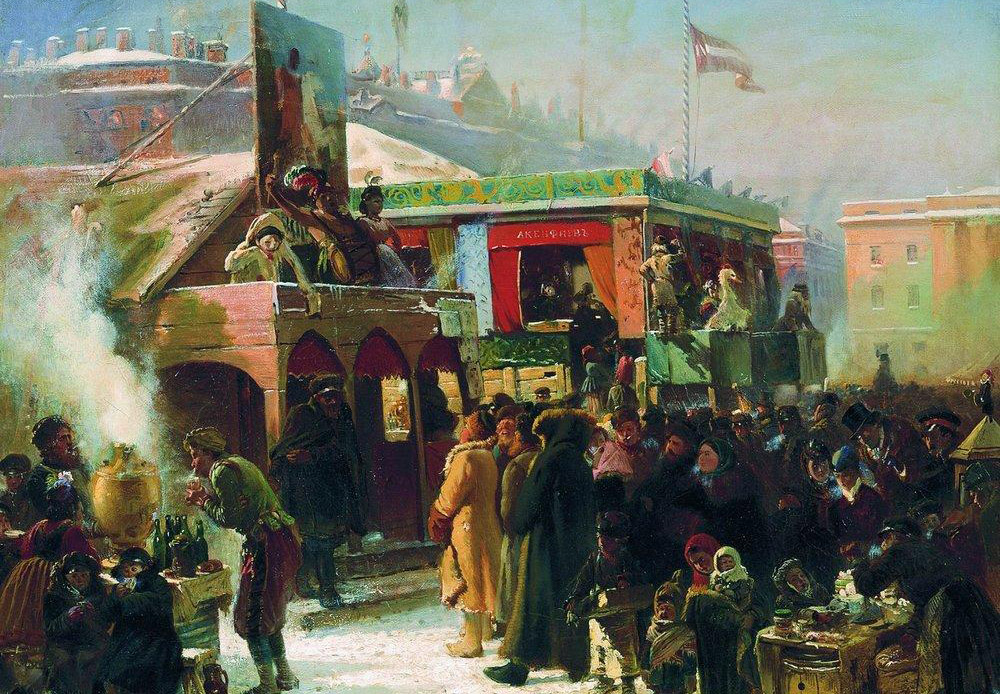 Folk festivities during Shrovetide on Admiralty Square. The square existed from 1822 to 1874, and hosted all municipal holidays. In honor of the 200th anniversary of Emperor Peter the Great, the founder of the city, the square was landscaped and turned into a garden. As a result, the square became Admiralty Prospect. / Fair booths on Admiralty Square in St. Petersburg, 1869, Konstantin Makovsky 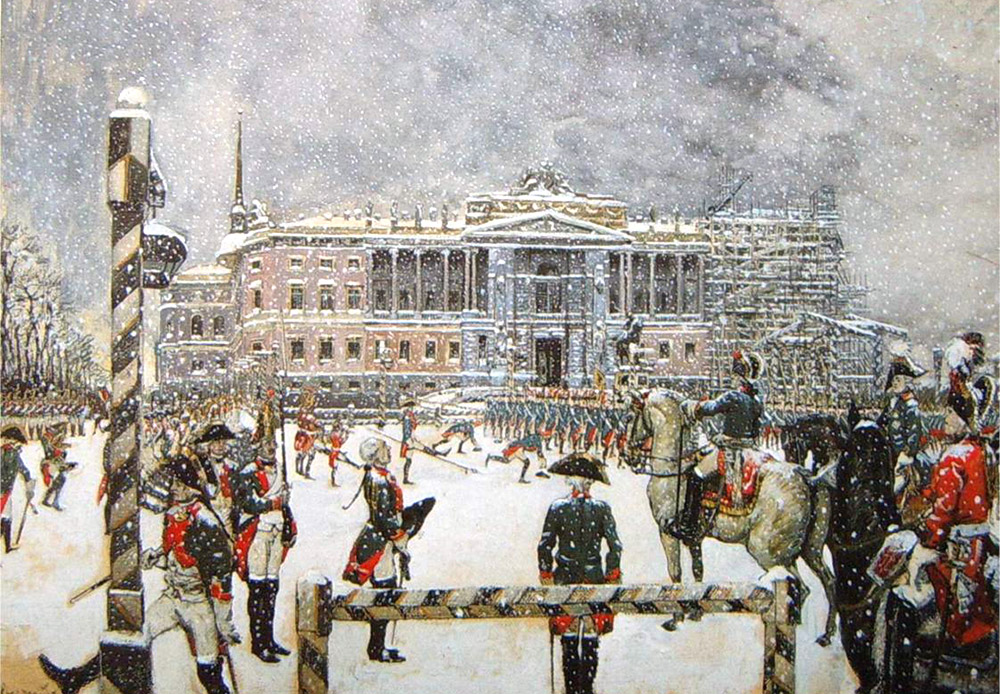 Military parade of Emperor Paul in front of Mikhailovsky Castle, 1907. Emperor Paul inherited the throne in 1796. According to contemporaries, Paul I was inclined to petty tyranny and had an unhealthy predilection for marching exercises and military barracks. He stated that anyone could ask the emperor about anything; however, many suppliants were subjected to corporal punishment and exiled to Siberia, Alexandre Benois 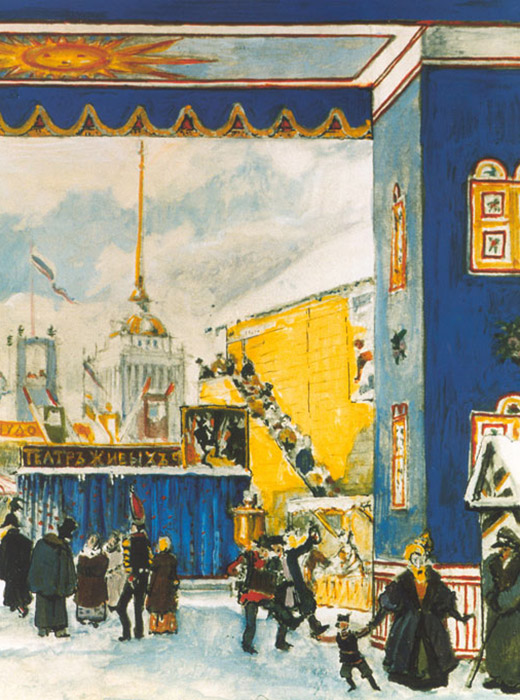 Shrovetide in St. Petersburg. The tradition of Maslenitsa (Shrovetide) dates back to pagan times, when Russian folk would bid farewell to winter and welcome spring. Author: artist and scenic designer Alexander Benois 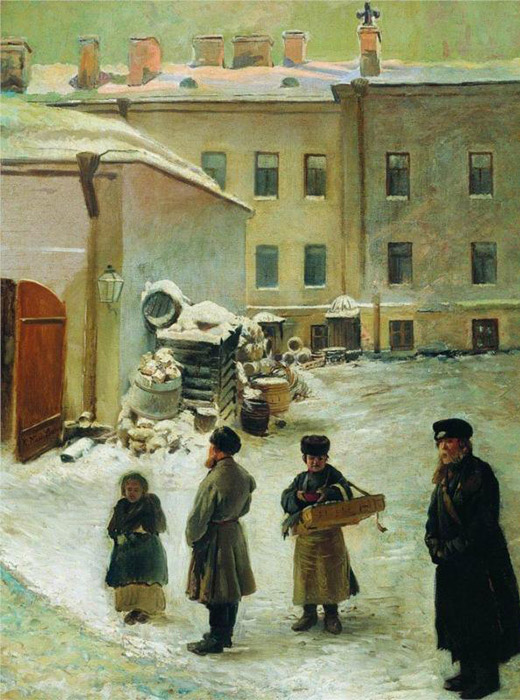 Yards in St. Petersburg differed from those in other cities 150 years ago, and still do. They were built according to the principle (which took hold in the second half of the 18th century) of mutual contiguity between neighboring buildings, with no gaps between them. St. Petersburg saw the construction of large residential blocks with solid facades. Inside these blocks, yards took shape - at times quite intricate and fantastical in appearance, connected by a system of arches and gateways, 1850, Konstantin Makovsky 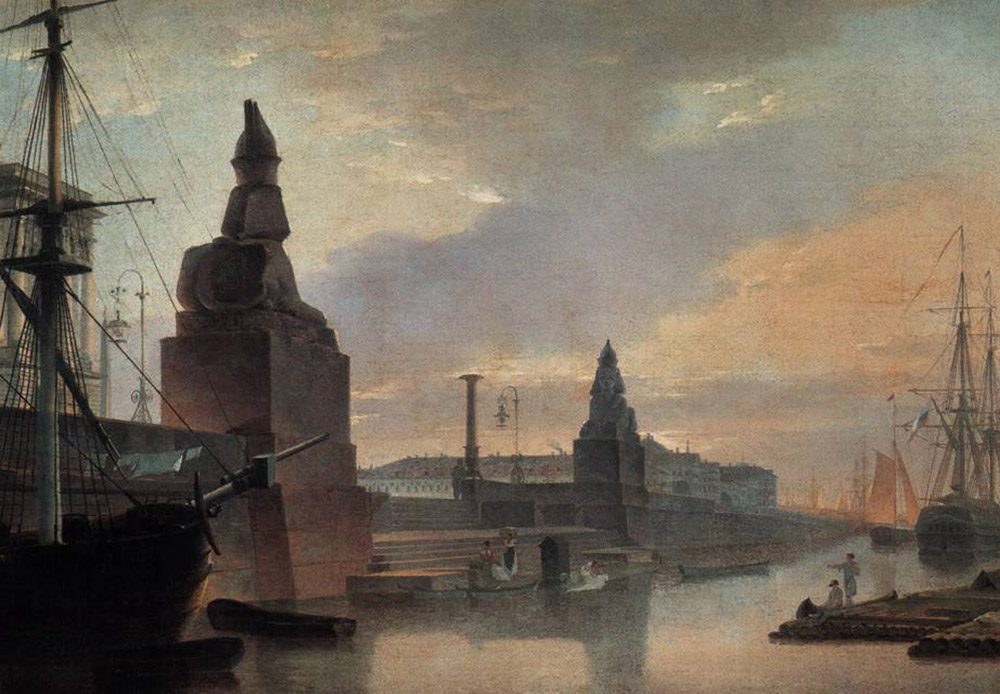 The Russian Academy of Arts was founded by Peter the Great in 1724, and today trains students in the art of reconstructing historically significant objects and sites, as well as being involved in projects for other cities: for example, the project to recreate the Cathedral of Christ the Savior in Moscow. / Sphinxes lining a quay in front of the St. Petersburg Academy of Arts, 1835, Maxim Vorobyev 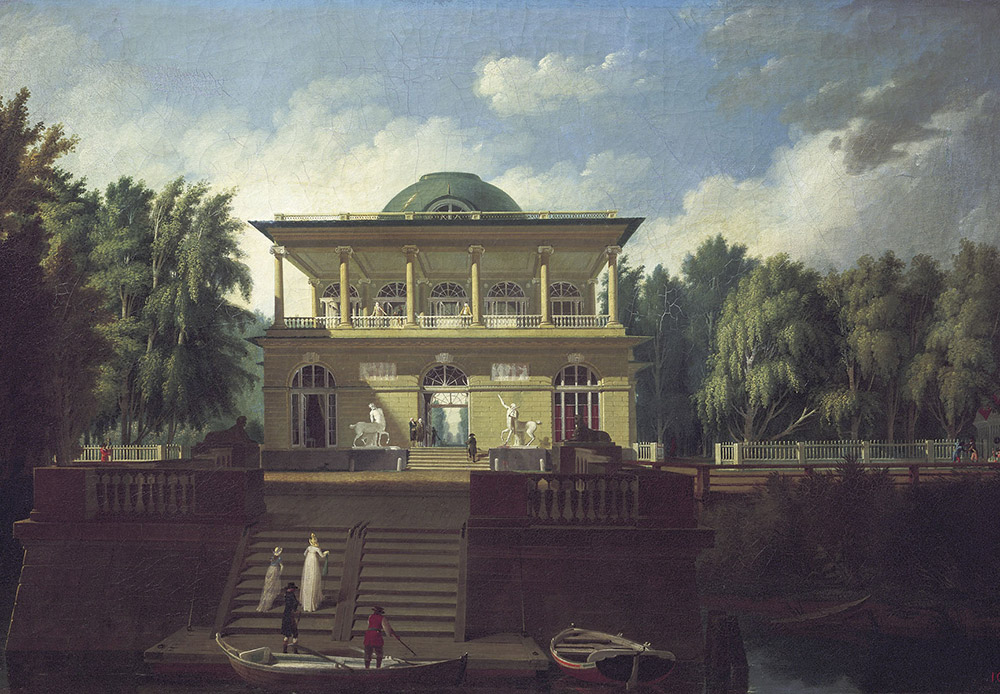 Stroganov Dacha was an estate in St. Petersburg owned by Count Baron Pavel Stroganov (whose lineage produced many wealthy merchants and landowners of St. Petersburg). The path from the estate to the Bolshaya Nevka River led down a granite staircase decorated with sculptures of lions and centaurs. The second floor was made of wood, and its central area contained a hall, aligned parallel to the embankment, for hosting balls and assemblies. / View of Stroganov Dacha in St. Petersburg, 1797, Andrei Vorokhin 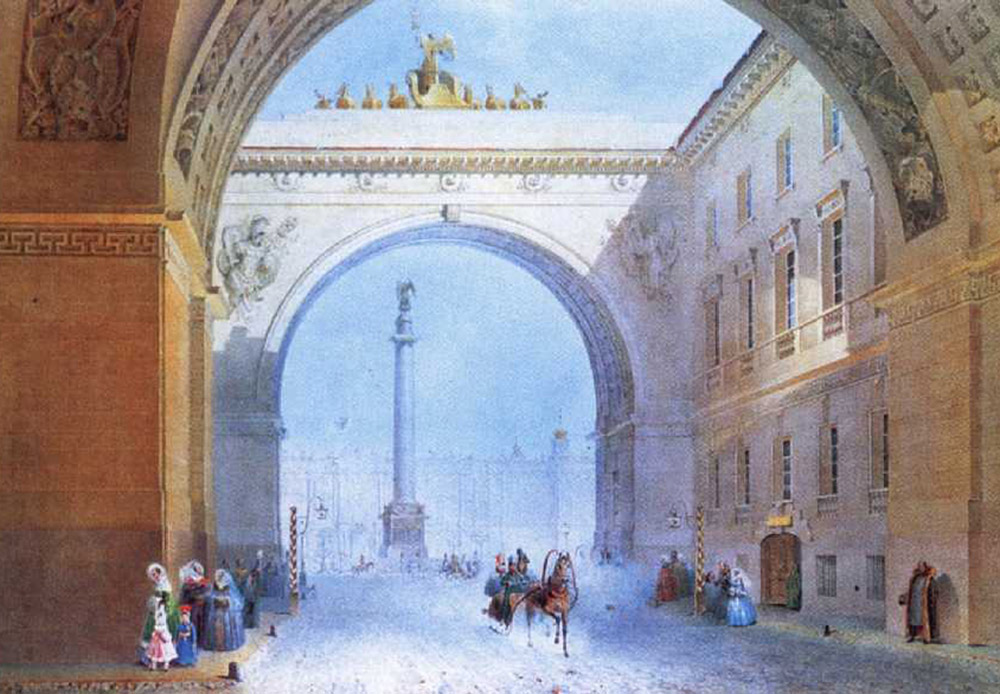 The General Staff of the Armed Forces of the Russian Empire was housed in a building on Palace Square in St. Petersburg in the vicinity of the former Winter Palace. The two wings of the edifice are connected by an arch bearing a sculpture of a soaring chariot drawn by six horses. / The arch of the General Staff building, Vasily Sadovnikov 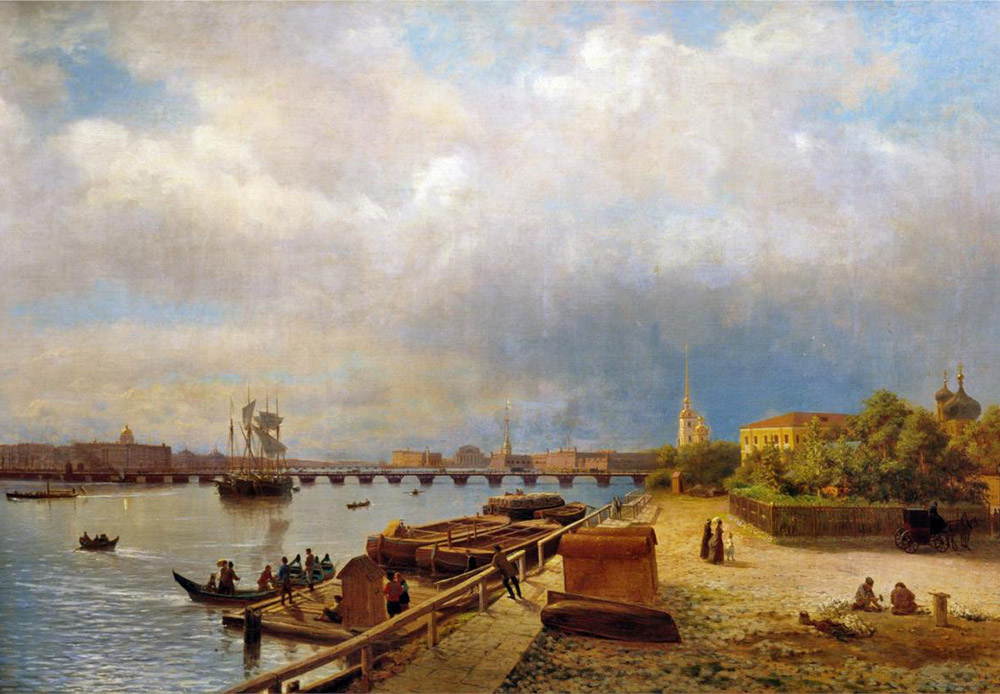 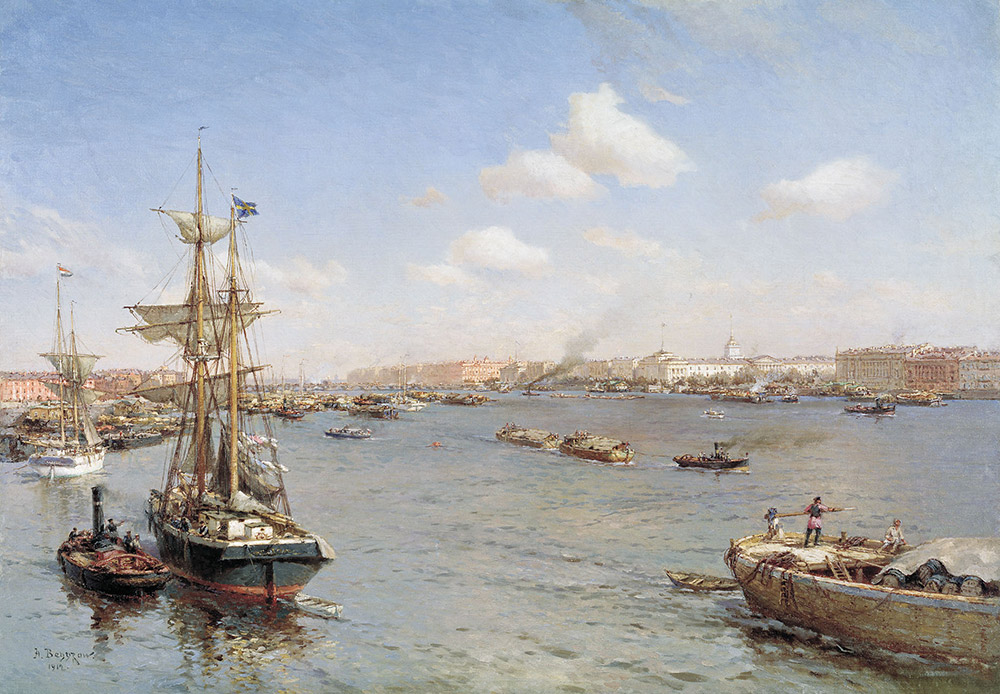 St. Petersburg was built as a sea port. All buildings and municipal regions were required to provide maximum accessibility for water transport. Before the construction of the St. Petersburg-Moscow railway in 1851, journeys to and from the capital were predominantly via the Neva. / Petersburg view of the Neva, 1912, Alexander Beggrov

The first street lighting in Russia appeared in St. Petersburg. The event is tied to the date of November 23, 1706. From that moment on, any major celebration would see lanterns hung on the building facades of the four main streets of the city. / Illumination in St. Petersburg, Fyodor Vasilyev